Protecting against Pneumococcal Disease: Critical Interactions between Probiotics and the Airway Microbiome 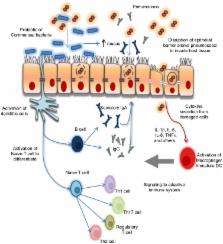 Thai H. Ho,  Emily Murray,  Iris K Pang … (2011)
Although commensal bacteria are crucial in maintaining immune homeostasis of the intestine, the role of commensal bacteria in immune responses at other mucosal surfaces remains less clear. Here, we show that commensal microbiota composition critically regulates the generation of virus-specific CD4 and CD8 T cells and antibody responses following respiratory influenza virus infection. By using various antibiotic treatments, we found that neomycin-sensitive bacteria are associated with the induction of productive immune responses in the lung. Local or distal injection of Toll-like receptor (TLR) ligands could rescue the immune impairment in the antibiotic-treated mice. Intact microbiota provided signals leading to the expression of mRNA for pro-IL-1β and pro-IL-18 at steady state. Following influenza virus infection, inflammasome activation led to migration of dendritic cells (DCs) from the lung to the draining lymph node and T-cell priming. Our results reveal the importance of commensal microbiota in regulating immunity in the respiratory mucosa through the proper activation of inflammasomes.

Probiotics and the gut microbiota in intestinal health and disease.

Nicholas E. Sherman,  Ryan Walker,  Melanie Gareau (2010)
The use of probiotics is increasing in popularity for both the prevention and treatment of a variety of diseases. While a growing number of well-conducted, prospective, randomized, controlled, clinical trials are emerging and investigations of underlying mechanisms of action are being undertaken, questions remain with respect to the specific immune and physiological effects of probiotics in health and disease. This Review considers recent advances in clinical trials of probiotics for intestinal disorders in both adult and pediatric populations. An overview of recent in vitro and in vivo research related to potential mechanisms of action of various probiotic formulations is also considered.

Jerry M. Wells (2011)
Abstract Over the past decade it has become clear that lactobacilli and other probiotic and commensal organisms can interact with mucosal immune cells or epithelial cells lining the mucosa to modulate specific functions of the mucosal immune system. The most well understood signalling mechanisms involve the innate pattern recognition receptors such as Toll-like receptors, nucleotide oligomerization domain-like receptors and C-type lectin receptors. Binding of microbe-associated molecular patterns with these receptors can activate antigen presenting cells and modulate their function through the expression of surface receptors, secreted cytokines and chemokines. In vitro the cytokine response of human peripheral blood mononuclear cells and dendritic cells to lactobacilli can be strikingly different depending on both the bacterial species and the strain. Several factors have been identified in lactobacilli that influence the immune response in vitro and in vivo including cell surface carbohydrates, enzymes modifying the structure of lipoteichoic acids and metabolites. In mice mechanistic studies point to a role for the homeostatic control of inducible T regulatory cells in the mucosal tissues as one possible immunomodulatory mechanism. Increasing evidence also suggests that induction of epithelial signalling by intestinal lactobacilli can modulate barrier functions, defensin production and regulate inflammatory signalling. Other probiotic mechanisms include modulation of the T cell effector subsets, enhancement of humoral immunity and interactions with the epithelial-associated dendritic cells and macrophages. A major challenge for the future will be to gain more knowledge about the interactions occurring between lactobacilli and the host in vivo and to understand the molecular basis of innate signalling in response to whole bacteria which trigger multiple signalling pathways.

Publisher ID: PPATHOGENS-D-11-02427
DOI: 10.1371/journal.ppat.1002652
PMC ID: 3369940
PubMed ID: 22685396
Copyright statement: Licciardi et al. This is an open-access article distributed under the terms of the Creative Commons Attribution License, which permits unrestricted use, distribution, and reproduction in any medium, provided the original author and source are credited.