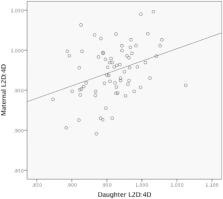 The relative length of the second and fourth fingers (2D:4D) may be a sex-linked correlate of prenatal androgen exposure. However, the nature of the sex-linkage is controversial, with evidence for both X- and Y-linkage of the 2D:4D phenotype.

To examine transgenerational effects relating to sex-linkage. In addition, assortative mating on 2D:4D was considered, as well as associations between 2D:4D and age and sex.

A family study was conducted. Parents and offspring completed a demographic questionnaire, and digit ratios were calculated from photocopies of participants' hands.

Correlations between 2D:4D of parents and children, as well as between mothers and fathers were conducted. 2D:4D was also examined in relation to age and sex.

Simon Baron-Cohen,  Rebecca C. Knickmeyer,  P Raggatt … (2004)
The ratio of 2nd to 4th digit length (2D:4D) is sexually dimorphic (mean 2D:4D is lower in males than females) and is thought to be fixed early in development. 2D:4D has been reported to be related to fetal growth, hand preference, autism, Asperger's syndrome, sperm counts, family size, age at myocardial infarction in men and breast cancer in women. There is indirect evidence that 2D:4D is established in utero and is negatively related to prenatal testosterone and positively with prenatal estradiol. However, there are no studies which show direct relationships between fetal testosterone (FT), fetal estradiol (FE) and 2D:4D. To investigate the relationships between 2D:4D ratios and FT and FE from amniotic fluid. Cohort study. 33 children. Radioimmunoassays of FT and FE obtained from routine amniocentesis; 2D:4D ratios calculated from 2nd and 4th digit length of the right and left hands at age 2 years. A significant negative association between right 2D:4D ratio and FT/FE ratio, which was independent of sex. These preliminary findings lend support to an association between low 2D:4D and high levels of FT relative to FE, and high 2D:4D with low FT relative to FE.

Andrew S. Baron,  S Wheelwright,  Christine R Skinner … (2001)
Currently there are no brief, self-administered instruments for measuring the degree to which an adult with normal intelligence has the traits associated with the autistic spectrum. In this paper, we report on a new instrument to assess this: the Autism-Spectrum Quotient (AQ). Individuals score in the range 0-50. Four groups of subjects were assessed: Group 1: 58 adults with Asperger syndrome (AS) or high-functioning autism (HFA); Group 2: 174 randomly selected controls. Group 3: 840 students in Cambridge University; and Group 4: 16 winners of the UK Mathematics Olympiad. The adults with AS/HFA had a mean AQ score of 35.8 (SD = 6.5), significantly higher than Group 2 controls (M = 16.4, SD = 6.3). 80% of the adults with AS/HFA scored 32+, versus 2% of controls. Among the controls, men scored slightly but significantly higher than women. No women scored extremely highly (AQ score 34+) whereas 4% of men did so. Twice as many men (40%) as women (21%) scored at intermediate levels (AQ score 20+). Among the AS/HFA group, male and female scores did not differ significantly. The students in Cambridge University did not differ from the randomly selected control group, but scientists (including mathematicians) scored significantly higher than both humanities and social sciences students, confirming an earlier study that autistic conditions are associated with scientific skills. Within the sciences, mathematicians scored highest. This was replicated in Group 4, the Mathematics Olympiad winners scoring significantly higher than the male Cambridge humanities students. 6% of the student sample scored 32+ on the AQ. On interview, 11 out of 11 of these met three or more DSM-IV criteria for AS/HFA, and all were studying sciences/mathematics, and 7 of the 11 met threshold on these criteria. Test-retest and interrater reliability of the AQ was good. The AQ is thus a valuable instrument for rapidly quantifying where any given individual is situated on the continuum from autism to normality. Its potential for screening for autism spectrum conditions in adults of normal intelligence remains to be fully explored.

Johannes Hönekopp,  Steven Watson (2015)
Our aims are, first, to describe the sex difference in the length ratio of the second and fourth digits (2D:4D), which likely reflects prenatal testosterone levels in humans. Second, to infer the loss of reliability observed in 2D:4D based on self-measured finger lengths. We used random-effects meta-analysis of 2D:4D based on expert-measured finger lengths (116 samples with 13,260 females and 11,789 males). We find a moderate sex difference (with lower 2D:4D for males), which shows substantial heterogeneity (which is unrelated to age). The sex difference is moderated by the type of finger length measurement and by hand. Measurement involving the distortion of soft tissue leads to a significantly larger sex difference than finger length measurement avoiding this. The sex difference in 2D:4D is larger in the right hand than in the left. The reliability of self-measured 2D:4D in the BBC internet study, by far the largest study on 2D:4D, is estimated to be 46% of that of expert-measured 2D:4D. Right-hand 2D:4D might be a better indicator of prenatal androgenisation than left-hand 2D:4D. The view that 2D:4D has allometric properties (Kratochvil L, Flegr J. 2009. Differences in 2nd to 4th digit length ratio in humans reflect shifts along the common allometric line. Biol Lett 5:643-646.) is not supported. Bone lengths contribute to the sex difference in 2D:4D. In addition, there might be a sex difference in fingers' soft tissue, which should be investigated. Because of measurement unreliability, correlations between 2D:4D and variables of interest are about one-third smaller in the BBC internet study than in studies in which 2D:4D is based on expert-measured finger lengths. (c) 2010 Wiley-Liss, Inc.