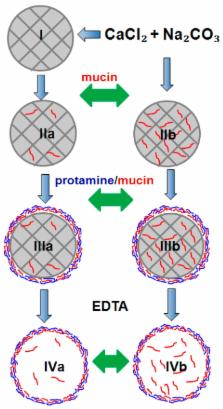 Porous vaterite crystals of CaCO 3 are extensively used for the fabrication of self-assembled polymer-based microparticles (capsules, beads, etc.) utilized for drug delivery and controlled release. The nature of the polymer used plays a crucial role and discovery of new perspective biopolymers is essential to assemble microparticles with desired characteristics, such as biocompatibility, drug loading efficiency/capacity, release rate, and stability. Glycoprotein mucin is tested here as a good candidate to assemble the microparticles because of high charge due to sialic acids, mucoadhesive properties, and a tendency to self-assemble, forming gels. Mucin loading into the crystals via co-synthesis is twice as effective as via adsorption into preformed crystals. Desialylated mucin has weaker binding to the crystals most probably due to electrostatic interactions between sialic acids and calcium ions on the crystal surface. Improved loading of low-molecular-weight inhibitor aprotinin into the mucin-containing crystals is demonstrated. Multilayer capsules (mucin/protamine) 3 have been made by the layer-by-layer self-assembly. Interestingly, the deposition of single mucin layers (mucin/water) 3 has also been proven, however, the capsules were unstable, most probably due to additional (to hydrogen bonding) electrostatic interactions in the case of the two polymers used. Finally, approaches to load biologically-active compounds (BACs) into the mucin-containing microparticles are discussed.

Andre G Skirtach,  Mihaela Delcea,  Helmuth Möhwald (2011)
Review of basic principles and recent developments in the area of stimuli responsive polymeric capsules and nanoshells formed via layer-by-layer (LbL) is presented. The most essential attributes of the LbL approach are multifunctionality and responsiveness to a multitude of stimuli. The stimuli can be logically divided into three categories: physical (light, electric, magnetic, ultrasound, mechanical, and temperature), chemical (pH, ionic strength, solvent, and electrochemical) and biological (enzymes and receptors). Using these stimuli, numerous functionalities of nanoshells have been demonstrated: encapsulation, release including that inside living cells or in tissue, sensors, enzymatic reactions, enhancement of mechanical properties, and fusion. This review describes mechanisms and basic principles of stimuli effects, describes progress in the area, and gives an outlook on emerging trends such as theranostics and nanomedicine. Copyright © 2011. Published by Elsevier B.V.