On the Structural Basis for Size-selective Permeation of Organic Cations through the Voltage-gated Sodium Channel : Effect of Alanine Mutations at the DEKA Locus on Selectivity, Inhibition by Ca 2+ and H +, and Molecular Sieving 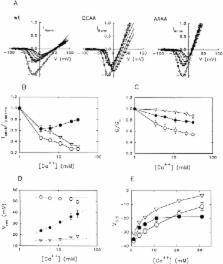 Recent evidence indicates that ionic selectivity in voltage-gated Na + channels is mediated by a small number of residues in P-region segments that link transmembrane elements S5 and S6 in each of four homologous domains denoted I, II, III, and IV. Important determinants for this function appear to be a set of conserved charged residues in the first three homologous domains, Asp(I), Glu(II), and Lys(III), located in a region of the pore called the DEKA locus. In this study, we examined several Ala-substitution mutations of these residues for alterations in ionic selectivity, inhibition of macroscopic current by external Ca 2+ and H +, and molecular sieving behavior using a series of organic cations ranging in size from ammonium to tetraethylammonium. Whole-cell recording of wild-type and mutant channels of the rat muscle μ1 Na + channel stably expressed in HEK293 cells was used to compare macroscopic current–voltage behavior in the presence of various external cations and an intracellular reference solution containing Cs + and very low Ca 2+. In particular, we tested the hypothesis that the Lys residue in domain III of the DEKA locus is responsible for restricting the permeation of large organic cations. Mutation of Lys(III) to Ala largely eliminated selectivity among the group IA monovalent alkali cations (Li +, Na +, K +, Rb +, Cs +) and permitted inward current of group IIA divalent cations (Mg 2+, Ca 2+, Sr 2+, Ba 2+). This same mutation also resulted in the acquisition of permeability to many large organic cations such as methylammonium, tetramethylammonium, and tetraethylammonium, all of which are impermeant in the native channel. The results lead to the conclusion that charged residues of the DEKA locus play an important role in molecular sieving behavior of the Na + channel pore, a function that has been previously attributed to a hypothetical region of the channel called the “selectivity filter.” A detailed examination of individual contributions of the Asp(I), Glu(II), and Lys(III) residues and the dependence on molecular size suggests that relative permeability of organic cations is a complex function of the size, charge, and polarity of these residues and cation substrates. As judged by effects on macroscopic conductance, charged residues of the DEKA locus also appear to play a role in the mechanisms of block by external Ca 2+ and H +, but are not essential for the positive shift in activation voltage that is produced by these ions.

C. Chen,  H Okayama (1987)
We describe a simple calcium phosphate transfection protocol and neo marker vectors that achieve highly efficient transformation of mammalian cells. In this protocol, the calcium phosphate-DNA complex is formed gradually in the medium during incubation with cells and precipitates on the cells. The crucial factors for obtaining efficient transformation are the pH (6.95) of the buffer used for the calcium phosphate precipitation, the CO2 level (3%) during the incubation of the DNA with the cells, and the amount (20 to 30 micrograms) and the form (circular) of DNA. In sharp contrast to the results with circular DNA, linear DNA is almost inactive. Under these conditions, 50% of mouse L(A9) cells can be stably transformed with pcDneo, a simian virus 40-based neo (neomycin resistance) marker vector. The NIH3T3, C127, CV1, BHK, CHO, and HeLa cell lines were transformed at efficiencies of 10 to 50% with this vector and the neo marker-incorporated pcD vectors that were used for the construction and transduction of cDNA expression libraries as well as for the expression of cloned cDNA in mammalian cells.

Ann M. Woodhull (1973)
Increasing the hydrogen ion concentration of the bathing medium reversibly depresses the sodium permeability of voltage-clamped frog nerves. The depression depends on membrane voltage: changing from pH 7 to pH 5 causes a 60% reduction in sodium permeability at +20 mV, but only a 20% reduction at +180 mV. This voltage-dependent block of sodium channels by hydrogen ions is explained by assuming that hydrogen ions enter the open sodium channel and bind there, preventing sodium ion passage. The voltage dependence arises because the binding site is assumed to lie far enough across the membrane for bound ions to be affected by part of the potential difference across the membrane. Equations are derived for the general case where the blocking ion enters the channel from either side of the membrane. For H+ ion blockage, a simpler model, in which H+ enters the channel only from the bathing medium, is found to be sufficient. The dissociation constant of H+ ions from the channel site, 3.9 x 10-6 M (pK a 5.4), is like that of a carboxylic acid. From the voltage dependence of the block, this acid site is about one-quarter of the way across the membrane potential from the outside. In addition to blocking as described by the model, hydrogen ions also shift the responses of sodium channel "gates" to voltage, probably by altering the surface potential of the nerve. Evidence for voltage-dependent blockage by calcium ions is also presented.

S Numa,  K Imoto,  S. Heinemann … (1992)
The sodium channel, one of the family of structurally homologous voltage-gated ion channels, differs from other members, such as the calcium and the potassium channels, in its high selectivity for Na+. This selectivity presumably reflects a distinct structure of its ion-conducting pore. We have recently identified two clusters of predominantly negatively charged amino-acid residues, located at equivalent positions in the four internal repeats of the sodium channel as the main determinants of sensitivity to the blockers tetrodotoxin and saxitoxin. All site-directed mutations reducing net negative charge at these positions also caused a marked decrease in single-channel conductance. Thus these two amino-acid clusters probably form part of the extracellular mouth and/or the pore wall of the sodium channel. We report here the effects on ion selectivity of replacing lysine at position 1,422 in repeat III and/or alanine at position 1,714 in repeat IV of rat sodium channel II (ref. 3), each located in one of the two clusters, by glutamic acid, which occurs at the equivalent positions in calcium channels. These amino-acid substitutions, unlike other substitutions in the adjacent regions, alter ion-selection properties of the sodium channel to resemble those of calcium channels. This result indicates that lysine 1,422 and alanine 1,714 are critical in determining the ion selectivity of the sodium channel, suggesting that these residues constitute part of the selectivity filter of the channel.