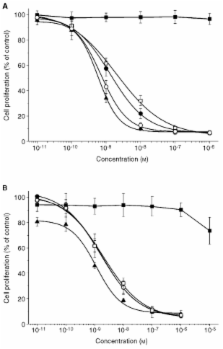 J Muindi,  Joseph A. Jakubowski,  D Scheinberg … (1992)
Although all-trans retinoic acid (RA) induces complete remission in a high proportion of patients with acute promyelocytic leukemia (APL), all groups have described clinical relapses despite continued RA treatment. This finding suggests that resistance to the cytodifferentiating effects of the retinoid had been acquired. To investigate potential mechanisms of clinical resistance to RA, we serially evaluated the clinical pharmacology of the drug in APL patients treated with this agent. Leukemic cells from patients relapsing from RA treatment were cultured in the presence of RA and examined for evidence of morphologic maturation. We also studied messenger RNA expression of the newly described gene product of the (15;17) translocation in APL, PML/RA receptor-alpha (PML/RAR-alpha). Serial pharmacokinetic studies showed that continuous daily RA treatment was associated with a marked decrease in plasma drug concentrations at the time of relapse compared with the initial day of therapy. Doubling the RA dose in six patients failed to reinduce response at the time of relapse and also failed to significantly augment plasma RA concentrations. However, leukemic cells obtained at the time of relapse from four patients retained in vitro sensitivity to the differentiating activity of RA (10(-6) mol/L). No change was observed in the pattern of PML/RAR-alpha expression assessed by Northern blot analysis at the time of relapse compared with pretreatment in two patients who were tested. These results indicate that clinical relapse and "resistance" to continuous treatment with all-trans RA in APL is associated with progressive reduction of plasma concentrations, potentially to levels below those that sustain differentiation of leukemic cells in vivo. Long-term success of this treatment will require the development of strategies that circumvent this pharmacologic phenomenon.

Y. Guo,  Simon P. Jones,  Jonathan Jones … (1997)
Retinoids, including all-trans-retinoic acid (RA) and its stereoisomer 9-cis-RA play important roles in regulating gene expression, through interactions with nuclear receptors, during embryonic development and in the maintenance of adult epithelial tissues (Chambon, P. (1995) Rec. Prog. Horm. Res. 50, 317-32; Mangelsdorf, D. J., and Evans, R. M. (1995) Cell 83, 841-850; Petkovich, M. (1992) Annu. Rev. Nutr. 12, 443-471). Evidence suggests that 4-hydroxylation of RA inside the target cell limits its biological activity and initiates a degradative process of RA leading to its eventual elimination. However, 18-hydroxylation and glucuronidation may also be important steps in this process. In this paper, we describe the cloning and characterization of the first mammalian retinoic acid-inducible retinoic acid-metabolizing cytochrome P450 (hP450RAI), which belongs to a novel class of cytochromes (CYP26). We demonstrate that hP450RAI is responsible for generation of several hydroxylated forms of RA, including 4-OH-RA, 4-oxo-RA, and 18-OH-RA. We also show that hP450RAI mRNA expression is highly induced by RA in certain human tumor cell lines and further show that RA-inducible RA metabolism may correlate with P450RAI expression. We conclude that this enzyme plays a key role in RA metabolism, functioning in a feedback loop where RA levels are controlled in an autoregulatory manner.

The emerging role of retinoids and retinoic acid metabolism blocking agents in the treatment of cancer.

Joan W. Miller (1998)
Although significant advances have been made in the treatment of some malignancies, the prognosis of patients with metastatic tumors remains poor. Differentiating agents redirect cells toward their normal phenotype and therefore may reverse or suppress evolving malignant lesions or prevent cancer invasion. In addition, they offer a potential alternative to the classic cytostatic drugs. The purpose of this review was to examine the current and potential future roles of differentiating agents in the treatment of cancer. Initial studies with differentiating agents focused on retinoid therapy. Although retinoids have shown some clinical success, their widespread use has been limited by resistance and, in the chemopreventive setting, toxicity. This has led to the synthesis of a number of new retinoids that currently are undergoing clinical investigation. A further approach to overcoming the drawbacks associated with exogenous retinoids has been to increase the levels of endogenous retinoic acid (RA) by inhibiting the cytochrome P450-mediated catabolism of RA using a novel class of agents known as retinoic acid metabolism blocking agents (RAMBAs). Liarozole, the first RAMBA to undergo clinical investigation, preferentially increases intratumor levels of endogenous RA resulting in antitumor activity. Although studies using exogenous retinoids in this setting have not yet fulfilled their initial promise, studies with a growing set of synthetic retinoids are ongoing. Furthermore, modulation of endogenous retinoids may offer a significant new potential treatment for cancer.