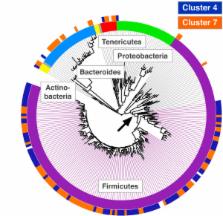 Disturbance to human microbiota may underlie several pathologies. Yet, we lack a comprehensive understanding of how lifestyle affects the dynamics of human-associated microbial communities.

Here, we link over 10,000 longitudinal measurements of human wellness and action to the daily gut and salivary microbiota dynamics of two individuals over the course of one year. These time series show overall microbial communities to be stable for months. However, rare events in each subjects’ life rapidly and broadly impacted microbiota dynamics. Travel from the developed to the developing world in one subject led to a nearly two-fold increase in the Bacteroidetes to Firmicutes ratio, which reversed upon return. Enteric infection in the other subject resulted in the permanent decline of most gut bacterial taxa, which were replaced by genetically similar species. Still, even during periods of overall community stability, the dynamics of select microbial taxa could be associated with specific host behaviors. Most prominently, changes in host fiber intake positively correlated with next-day abundance changes among 15% of gut microbiota members.

Our findings suggest that although human-associated microbial communities are generally stable, they can be quickly and profoundly altered by common human actions and experiences.

The online version of this article (doi:10.1186/gb-2014-15-7-r89) contains supplementary material, which is available to authorized users.

Hedvig E Jakobsson, Cecilia Jernberg, Anders F. Andersson … (2010)
Antibiotic administration is the standard treatment for the bacterium Helicobacter pylori, the main causative agent of peptic ulcer disease and gastric cancer. However, the long-term consequences of this treatment on the human indigenous microbiota are relatively unexplored. Here we studied short- and long-term effects of clarithromycin and metronidazole treatment, a commonly used therapy regimen against H. pylori, on the indigenous microbiota in the throat and in the lower intestine. The bacterial compositions in samples collected over a four-year period were monitored by analyzing the 16S rRNA gene using 454-based pyrosequencing and terminal-restriction fragment length polymorphism (T-RFLP). While the microbial communities of untreated control subjects were relatively stable over time, dramatic shifts were observed one week after antibiotic treatment with reduced bacterial diversity in all treated subjects in both locations. While the microbiota of the different subjects responded uniquely to the antibiotic treatment some general trends could be observed; such as a dramatic decline in Actinobacteria in both throat and feces immediately after treatment. Although the diversity of the microbiota subsequently recovered to resemble the pre treatment states, the microbiota remained perturbed in some cases for up to four years post treatment. In addition, four years after treatment high levels of the macrolide resistance gene erm(B) were found, indicating that antibiotic resistance, once selected for, can persist for longer periods of time than previously recognized. This highlights the importance of a restrictive antibiotic usage in order to prevent subsequent treatment failure and potential spread of antibiotic resistance.