Crp Is a Global Regulator of Antibiotic Production in Streptomyces 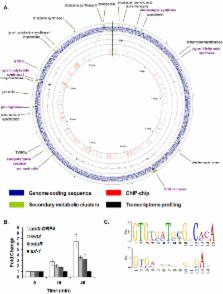 Cyclic AMP receptor protein (Crp) is a transcription regulator controlling diverse cellular processes in many bacteria. In Streptomyces coelicolor, it is well established that Crp plays a critical role in spore germination and colony development. Here, we demonstrate that Crp is a key regulator of secondary metabolism and antibiotic production in S. coelicolor and show that it may additionally coordinate precursor flux from primary to secondary metabolism. We found that crp deletion adversely affected the synthesis of three well-characterized antibiotics in S. coelicolor: actinorhodin (Act), undecylprodigiosin (Red), and calcium-dependent antibiotic (CDA). Using chromatin immunoprecipitation-microarray (ChIP-chip) assays, we determined that eight (out of 22) secondary metabolic clusters encoded by S. coelicolor contained Crp-associated sites. We followed the effect of Crp induction using transcription profiling analyses and found secondary metabolic genes to be significantly affected: included in this Crp-dependent group were genes from six of the clusters identified in the ChIP-chip experiments. Overexpressing Crp in a panel of Streptomyces species led to enhanced antibiotic synthesis and new metabolite production, suggesting that Crp control over secondary metabolism is broadly conserved in the streptomycetes and that Crp overexpression could serve as a powerful tool for unlocking the chemical potential of these organisms.

Streptomyces produces a remarkably diverse array of secondary metabolites, including many antibiotics. In recent years, genome sequencing has revealed that these products represent only a small proportion of the total secondary metabolite potential of Streptomyces. There is, therefore, considerable interest in discovering ways to stimulate the production of new metabolites. Here, we show that Crp (the classical regulator of carbon catabolite repression in Escherichia coli) is a master regulator of secondary metabolism in Streptomyces. It binds to eight of 22 secondary metabolic gene clusters in the Streptomyces coelicolor genome and directly affects the expression of six of these. Deletion of crp in S. coelicolor leads to dramatic reductions in antibiotic levels, while Crp overexpression enhances antibiotic production. We find that the antibiotic-stimulatory capacity of Crp extends to other streptomycetes, where its overexpression activates the production of “cryptic” metabolites that are not otherwise seen in the corresponding wild-type strain.

Complete genome sequence of the model actinomycete Streptomyces coelicolor A3(2).

S Bentley, K Chater, A.-M. Cerdeño-Tárraga … (2002)
Streptomyces coelicolor is a representative of the group of soil-dwelling, filamentous bacteria responsible for producing most natural antibiotics used in human and veterinary medicine. Here we report the 8,667,507 base pair linear chromosome of this organism, containing the largest number of genes so far discovered in a bacterium. The 7,825 predicted genes include more than 20 clusters coding for known or predicted secondary metabolites. The genome contains an unprecedented proportion of regulatory genes, predominantly those likely to be involved in responses to external stimuli and stresses, and many duplicated gene sets that may represent 'tissue-specific' isoforms operating in different phases of colonial development, a unique situation for a bacterium. An ancient synteny was revealed between the central 'core' of the chromosome and the whole chromosome of pathogens Mycobacterium tuberculosis and Corynebacterium diphtheriae. The genome sequence will greatly increase our understanding of microbial life in the soil as well as aiding the generation of new drug candidates by genetic engineering.

The regulation of the secondary metabolism of Streptomyces: new links and experimental advances.

Kenneth J. McDowall, Frederieke van der Deen (2011)
Streptomycetes and other actinobacteria are renowned as a rich source of natural products of clinical, agricultural and biotechnological value. They are being mined with renewed vigour, supported by genome sequencing efforts, which have revealed a coding capacity for secondary metabolites in vast excess of expectations that were based on the detection of antibiotic activities under standard laboratory conditions. Here we review what is known about the control of production of so-called secondary metabolites in streptomycetes, with an emphasis on examples where details of the underlying regulatory mechanisms are known. Intriguing links between nutritional regulators, primary and secondary metabolism and morphological development are discussed, and new data are included on the carbon control of development and antibiotic production, and on aspects of the regulation of the biosynthesis of microbial hormones. Given the tide of antibiotic resistance emerging in pathogens, this review is peppered with approaches that may expand the screening of streptomycetes for new antibiotics by awakening expression of cryptic antibiotic biosynthetic genes. New technologies are also described that have potential to greatly further our understanding of gene regulation in what is an area fertile for discovery and exploitation

Studies of the distribution of Escherichia coli cAMP-receptor protein and RNA polymerase along the E. coli chromosome.

Marcus Harrison, Stephen Busby, Douglas Hurd … (2005)
Chromatin immunoprecipitation and high-density microarrays have been used to monitor the distribution of the global transcription regulator Escherichia coli cAMP-receptor protein (CRP) and RNA polymerase along the E. coli chromosome. Our results identify targets occupied by CRP and genes transcribed by RNA polymerase in vivo. Many of the loci of CRP binding are at known CRP regulated promoters. However, our results show that CRP also interacts with thousands of weaker sites across the whole chromosome and that this "background" binding can be used as a probe for organization within the E. coli folded chromosome. In rapidly growing cells, we show that the major sites of RNA polymerase binding are approximately 90 transcription units that include genes needed for protein synthesis. Upon the addition of rifampicin, RNA polymerase is distributed among >500 functional promoters. We show that the chromatin immunoprecipitation and high-density-microarrays methodology can be used to study the redistribution of RNA polymerase induced by environmental stress, revealing previously uncharacterized aspects of RNA polymerase behavior and providing an alternative to the "transcriptomics" approach for studying global transcription patterns.