Benzodiazepine prescribing for children, adolescents, and young adults from 2006 through 2013: A total population register-linkage study 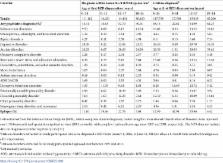 Pharmacoepidemiological studies have long raised concerns on widespread use of benzodiazepines and benzodiazepine-related drugs (BZDs), in particular long-term use, among adults and the elderly. In contrast, evidence pertaining to the rates of BZD use at younger ages is still scarce, and the factors that influence BZD utilisation and shape the different prescribing patterns in youths remain largely unexplored. We examined the prevalence rates, relative changes in rates over time, and prescribing patterns for BZD dispensation in young people aged 0–24 years in Sweden during the period January 1, 2006–December 31, 2013, and explored demographic, clinical, pharmacological, and prescriber-related attributes of BZD prescribing in this group.

Through the linkage of 3 nationwide Swedish health and administrative registers, we collected data on 17,500 children (0–11 years), 15,039 adolescents (12–17 years), and 85,200 young adults (18–24 years) with at least 1 dispensed prescription for a BZD during 2006–2013, out of 3,726,818 Swedish inhabitants aged 0–24 years. Age-specific annual prevalence rates of BZD dispensations were adjusted for population growth, and relative changes in rates were calculated between 2006 and 2013. We analysed how BZD dispensation varied by sex, psychiatric morbidity and epilepsy, concurrent dispensation of psychotropic medication, type of dispensed BZD, and type of healthcare provider prescribing the BZD. Prescribing patterns were established in relation to duration (3 months, >3 to ≤6 months, or >6 months), dosage (<0.5 defined daily dosage [DDD]/day, ≥0.5 to <1.5 DDD/day, or ≥1.5 DDD/day), and “user category” (“regular users” [≥0.5 to <1.5 DDD/day for ≥1 year], “heavy users” [≥1.5 DDD/day for ≥1 year], or otherwise “occasional users”). Multinomial regression models were fitted to test associations between BZD prescribing patterns and individual characteristics of study participants. Between 2006 and 2013, the prevalence rate of BZD dispensation among individuals aged 0–24 years increased by 22% from 0.81 per 100 inhabitants to 0.99 per 100 inhabitants. This increase was mainly driven by a rise in the rate among young adults (+20%), with more modest increases in children (+3%) and adolescents (+7%). Within each age category, overall dispensation of BZD anxiolytics and clonazepam decreased over time, while dispensation of BZD hypnotics/sedatives, including Z-drugs, showed an increase between 2006 and 2013. Out of 117,739 study participants with dispensed BZD prescriptions, 65% initiated BZD prescriptions outside of psychiatric services (92% of children, 60% of adolescents, 60% of young adults), and 76% were dispensed other psychotropic drugs concurrently with a BZD (46% of children, 80% of adolescents, 81% of young adults). Nearly 30% of the participants were prescribed a BZD for longer than 6 months (18% of children, 31% of adolescents, 31% of young adults). A high dose prescription (≥1.5 DDD/day) and heavy use were detected in 2.6% and 1.7% of the participants, respectively. After controlling for potential confounding by demographic and clinical characteristics, the characteristics age above 11 years at the first BZD dispensation, lifetime psychiatric diagnosis or epilepsy, and concurrent dispensation of other psychotropic drugs were found to be associated with higher odds of being prescribed a BZD for longer than 6 months, high dose prescription, and heavy use. Male sex was associated with a higher likelihood of high dose prescription and heavy use, but not with being prescribed a BZD on a long-term basis (> 6 months). The study limitations included lack of information on actual consumption of the dispensed BZDs and unavailability of data on the indications for BZD prescriptions.

The overall increase in prevalence rates of BZD dispensations during the study period and the unexpectedly high proportion of individuals who were prescribed a BZD on a long-term basis at a young age indicate a lack of congruence with international and national guidelines. These findings highlight the need for close monitoring of prescribing practices, particularly in non-psychiatric settings, in order to build an evidence base for safe and efficient BZD treatment in young persons.

Why was this study done?

What did the researchers do and find?

What do these findings mean?

D. Nutt,  H Selsick,  C Idzikowski … (2010)
Sleep disorders are common in the general population and even more so in clinical practice, yet are relatively poorly understood by doctors and other health care practitioners. These British Association for Psychopharmacology guidelines are designed to address this problem by providing an accessible up-to-date and evidence-based outline of the major issues, especially those relating to reliable diagnosis and appropriate treatment. A consensus meeting was held in London in May 2009. Those invited to attend included BAP members, representative clinicians with a strong interest in sleep disorders and recognized experts and advocates in the field, including a representative from mainland Europe and the USA. Presenters were asked to provide a review of the literature and identification of the standard of evidence in their area, with an emphasis on meta-analyses, systematic reviews and randomized controlled trials where available, plus updates on current clinical practice. Each presentation was followed by discussion, aimed to reach consensus where the evidence and/or clinical experience was considered adequate or otherwise to flag the area as a direction for future research. A draft of the proceedings was then circulated to all participants for comment. Key subsequent publications were added by the writer and speakers at draft stage. All comments were incorporated as far as possible in the final document, which represents the views of all participants although the authors take final responsibility for the document.

Association between concurrent use of prescription opioids and benzodiazepines and overdose: retrospective analysis

Benzodiazepines revisited--will we ever learn?

M Lader (2011)
To re-examine various aspects of the benzodiazepines (BZDs), widely prescribed for 50 years, mainly to treat anxiety and insomnia. It is a descriptive review based on the Okey Lecture delivered at the Institute of Psychiatry, King's College London, in November 2010. A search of the literature was carried out in the Medline, Embase and Cochrane Collaboration databases, using the codeword 'benzodiazepine(s)', alone and in conjunction with various terms such as 'dependence', 'abuse', etc. Further hand-searches were made based on the reference lists of key papers. As 60,000 references were found, this review is not exhaustive. It concentrates on the adverse effects, dependence and abuse. Almost from their introduction the BZDs have been controversial, with polarized opinions, advocates pointing out their efficacy, tolerability and patient acceptability, opponents deprecating their adverse effects, dependence and abuse liability. More recently, the advent of alternative and usually safer medications has opened up the debate. The review noted a series of adverse effects that continued to cause concern, such as cognitive and psychomotor impairment. In addition, dependence and abuse remain as serious problems. Despite warnings and guidelines, usage of these drugs remains at a high level. The limitations in their use both as choice of therapy and with respect to conservative dosage and duration of use are highlighted. The distinction between low-dose 'iatrogenic' dependence and high-dose abuse/misuse is emphasized. The practical problems with the benzodiazepines have persisted for 50 years, but have been ignored by many practitioners and almost all official bodies. The risk-benefit ratio of the benzodiazepines remains positive in most patients in the short term (2-4 weeks) but is unestablished beyond that time, due mainly to the difficulty in preventing short-term use from extending indefinitely with the risk of dependence. Other research issues include the possibility of long-term brain changes and evaluating the role of the benzodiazepine antagonist, flumazenil, in aiding withdrawal. © 2011 The Author, Addiction © 2011 Society for the Study of Addiction.

Funded by: funder-id http://dx.doi.org/10.13039/501100004348, Stockholms Läns Landsting;
Award Recipient :
ORCID: http://orcid.org/0000-0002-8375-9447
Clara Hellner
This research was financially supported by the Stockholm County Council, Stockholm, Sweden ( www.sll.se; to CH). Funders had no role in the design and conduct of the study, collection, management, analysis, or interpretation of data, preparation of the manuscript or decision to submit the manuscript for publication.

Data Availability Sharing of the individual-level data is restricted by Swedish data protection laws and data underlying the reported findings cannot be deposited in publicly accessible archives. In this study, data were obtained from the Prescribed Drug Register and the National Patient Register held by the Swedish National Board of Health and Welfare (Socialstyrelsen; http://www.socialstyrelsen.se/english), and the Total Population Register maintained by Statistics Sweden (SCB; http://www.scb.se/en/). For further information or enquiries about access to the data, any interested parties can contact the data owners, Socialstyrelsen via registerservice@ 123456socialstyrelsen.se and SCB via information@ 123456scb.se .
Data availability:
ScienceOpen disciplines: Medicine