The Role of Fear-Avoidance Beliefs on Low Back Pain-Related Disability in a Developing Socioeconomic and Conservative Culture: A Cross-Sectional Study of a Pakistani Population 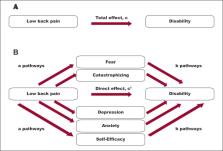 The relationship of low back pain, the world’s top disabling condition, with functional disability is often explained by the mediation effect of fear, catastrophizing, and psychological distress. These relationships have not been explored within chronic back pain patients from a low socio-economic, predominantly Muslim country. Thus, it was unclear whether previously established pathways would be consistent in Pakistani pain patients to help guide Pakistani clinicians caring for back pain patients. This cross-sectional study translated English versions of questionnaires within the fear-avoidance model into Urdu, tested the clinimetric properties of the Urdu versions for people with chronic low back pain (CLBP) in Pakistan, and performed mediation analysis to investigate pathways of the fear-avoidance model.

A total of 151 people from Pakistan with CLBP completed the questionnaires, with good results for internal consistency ( r > 0.85), convergent validity ( r > 0.59), and test–retest reliability (ICC r > 0.85). The association of pain with disability was significant ( B=2.36, r 2 = 0.19, p<0.001), and the indirect effect of the mediators explained 81% of pain intensity’s total effect on disability. All mediators, apart from physical activity-related fear-avoidance beliefs, were significant mediators of the effect of pain intensity on disability.

The Urdu versions of the fear-avoidance questionnaires show good clinimetric properties for use in clinical settings and research in Pakistan. These analyses support existing data for the mediation effect of catastrophizing, psychological distress, and self-efficacy on pain-related disability, and extends these findings to suggest that fear about work may be more important in a relatively lower socioeconomic sample of pain patients.

Fear-avoidance and its consequences in chronic musculoskeletal pain: a state of the art

A systematic review of low back pain cost of illness studies in the United States and internationally.

Simon Dagenais,  Jaime Caro,  Scott Haldeman (2008)
The economic burden of low back pain (LBP) is very large and appears to be growing. It is not possible to impact this burden without understanding the strengths and weaknesses of the research on which these costs are calculated. To conduct a systematic review of LBP cost of illness studies in the United States and internationally. Systematic review of the literature. Medline was searched to uncover studies about the direct or indirect costs of LBP published in English from 1997 to 2007. Data extracted for each eligible study included study design, population, definition of LBP, methods of estimating costs, year of data, and estimates of direct, indirect, or total costs. Results were synthesized descriptively. The search yielded 147 studies, of which 21 were deemed relevant; 4 other studies and 2 additional abstracts were found by searching reference lists, bringing the total to 27 relevant studies. The studies reported on data from Australia, Belgium, Japan, Korea, the Netherlands, Sweden, the UK, and the United States. Nine studies estimated direct costs only, nine indirect costs only, and nine both direct and indirect costs, from a societal (n=18) or private insurer (n=9) perspective. Methodology used to derive both direct and indirect cost estimates differed markedly among the studies. Among studies providing a breakdown on direct costs, the largest proportion of direct medical costs for LBP was spent on physical therapy (17%) and inpatient services (17%), followed by pharmacy (13%) and primary care (13%). Among studies providing estimates of total costs, indirect costs resulting from lost work productivity represented a majority of overall costs associated with LBP. Three studies reported that estimates with the friction period approach were 56% lower than with the human capital approach. Several studies have attempted to estimate the direct, indirect, or total costs associated with LBP in various countries using heterogeneous methodology. Estimates of the economic costs in different countries vary greatly depending on study methodology but by any standards must be considered a substantial burden on society. This review did not identify any studies estimating the total costs of LBP in the United States from a societal perspective. Such studies may be helpful in determining appropriate allocation of health-care resources devoted to this condition.