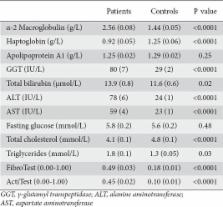 The aim of this study was to compare noninvasive biomarkers, FibroTest and ActiTest in predicting fibrosis stage and inflammation grade in chronic hepatitis C (CHC) patients with liver biopsy (LB).

In 107 patients with CHC, levels of six serum biomarkers (alanine aminotransferase, γ-glutamyl transpeptidase, total bilirubin, haptoglobin, apolipoprotein, α-2 macroglobulin) were determined at the time of LB. LB was evaluated by Metavir score for fibrosis and inflammation. Voluntary blood donors (n=106) were taken as controls for the study.

Fibrotest and ActiTest had high observed and standardized diagnostic values for predicting fibrosis and activity respectively.

An algorithm for the grading of activity in chronic hepatitis C. The METAVIR Cooperative Study Group.

Arie Regev,  Luis G Molina,  L Jeffers … (2002)
Needle liver biopsy has been shown to have a high rate of sampling error in patients with diffuse parenchymal liver diseases. In these cases, the sample of liver tissue does not reflect the true degree of inflammation, fibrosis, or cirrhosis, despite an adequate sample size. The aim of this study was to determine the rate and extent of sampling error in patients with chronic hepatitis C virus infection, and to assess the intraobserver variation with the commonly used scoring system proposed by Scheuer and modified by Batts and Ludwig. A total of 124 patients with chronic hepatitis C virus infection underwent simultaneous laparoscopy-guided biopsies of the right and left hepatic lobes. Formalin-fixed paraffin-embedded sections were stained with hematoxylin and eosin and with trichrome. The slides were blindly coded and randomly divided among two hepatopathologists. Inflammation and fibrosis were scored according to the standard grading (inflammation) and staging (fibrosis) method based on the modified Scheuer system. Following the interpretation, the slides were uncoded to compare the results of the right and left lobes. Fifty of the samples were blindly resubmitted to each of the pathologists to determine the intraobserver variation. Thirty of 124 patients (24.2%) had a difference of at least one grade, and 41 of 124 patients (33.1%) had a difference of at least one stage between the right and left lobes. In 18 patients (14.5%), interpretation of cirrhosis was given in one lobe, whereas stage 3 fibrosis was given in the other. A difference of two stages or two grades was found in only three (2.4%) and two (1.6%) patients, respectively. Of the 50 samples that were examined twice, the grading by each pathologist on the second examination differed from the first examination in 0% and 4%, and the staging differed in 6% and 10%, respectively. All observed variations were of one grade or one stage. Liver biopsy samples taken from the right and left hepatic lobes differed in histological grading and staging in a large proportion of chronic hepatitis C virus patients; however, differences of more than one stage or grade were uncommon. A sampling error may have led to underdiagnosis of cirrhosis in 14.5% of the patients. These differences could not be attributed to intraobserver variation, which appeared to be low.

Guarantor of the article: Rafie Yakoob