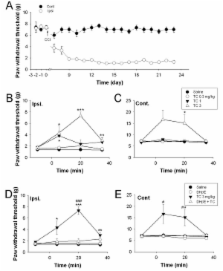 TC-2559 is a selective α4β2 subtype of nicotinic acetylcholine receptor (nAChR) partial agonist and α4β2 nAChR activation has been related to antinociception. The aim of this study is to investigate the analgesic effect of TC-2559 and its underlying spinal mechanisms.

1) In vivo bioavailability study: TC-2559 (3 mg/kg) had high absorption rate in rats with maximal total brain concentration reached over 4.6 μM within first 15 min after administration and eliminated rapidly with brain half life of about 20 min after injection. 2) In vivo behavioral experiments: TC-2559 exerts dose dependent antinociceptive effects in both formalin test in mice and chronic constriction injury (CCI) model in rats by activation of α4β2 nAChRs; 3) Whole-cell patch-clamp studies in the superficial dorsal horn neurons of the spinal cord slices: perfusion of TC-2559 (2 μM) significantly increased the frequency, but not amplitude of spontaneous inhibitory postsynaptic currents (sIPSCs). The enhancement of sIPSCs was blocked by pre-application of DHβE (2 μM), a selective α4β2 nicotinic receptor antagonist. Neither the frequency nor the amplitude of spontaneous excitatory postsynaptic currents (sEPSCs) of spinal dorsal horn neurons were affected by TC-2559.

Enhancement of inhibitory synaptic transmission in the spinal dorsal horn via activation of α4β2 nAChRs may be one of the mechanisms of the antinociceptive effects of TC-2559 on pathological pain models. It provides further evidence to support the notion that selective α4β2 subtype nAChR agonist may be developed as new analgesic drug for the treatment of neuropathic pain.

The formalin test: an evaluation of the method.

S Hunskaar,  O Berge,  A Tjølsen … (1992)
The formalin test for nociception, which is predominantly used with rats and mice, involves moderate, continuous pain generated by injured tissue. In this way it differs from most traditional tests of nociception which rely upon brief stimuli of threshold intensity. In this article we describe the main features of the formalin test, including the characteristics of the stimulus and how changes in nociceptive behaviour may be measured and interpreted. The response to formalin shows an early and a late phase. The early phase seems to be caused predominantly by C-fibre activation due to the peripheral stimulus, while the late phase appears to be dependent on the combination of an inflammatory reaction in the peripheral tissue and functional changes in the dorsal horn of the spinal cord. These functional changes seem to be initiated by the C-fibre barrage during the early phase. In mice, the behavioural response in the late phase depends on the ambient temperature. We argue that the peripheral tissue temperature as well as other factors influencing the peripheral inflammation may affect the response, possibly confounding the results obtained with the test. Furthermore, we discuss the methods of recording the response and the value of observing more than one aspect of behaviour. Scoring of several behavioural variables provides a means of assessing motor or sensorimotor function as possible causes for changes in behaviour. In conclusion, the formalin test is a valuable addition to the battery of methods available to study nociception.

Z Seltzer,  Y Shir,  R Dubner (1990)
Partial nerve injury is the main cause of causalgiform pain disorders in humans. We present here a novel animal model of this condition. In rats we unilaterally ligated about half of the sciatic nerve high in the thigh. Within a few hours after the operation, and for several months thereafter, the rats developed guarding behavior of the ipsilateral hind paw and licked it often, suggesting the possibility of spontaneous pain. The plantar surface of the foot was evenly hyperesthetic to non-noxious and noxious stimuli. None of the rats autotomized. There was a sharp decrease in the withdrawal thresholds bilaterally in response to repetitive Von Frey hair stimulation at the plantar side. After a series of such stimuli in the operated side, light touch elicited aversive responses, suggesting allodynia to touch. The withdrawal thresholds to CO2 laser heat pulses were markedly lowered bilaterally. Suprathreshold noxious heat pulses elicited exaggerated responses unilaterally, suggesting thermal hyperalgesia. Pin-prick evoked such exaggerated responses bilaterally (mechanical hyperalgesia). In a companion report, we show that these abnormalities critically depend on the sympathetic outflow. Based on the immediate onset and long-lasting perpetuation of similar symptoms, such as touch-evoked allodynia and hyperalgesia, and the resemblance of the contralateral phenomena to 'mirror image' pains in some humans with causalgia, we suggest that this preparation may serve as a model for syndromes of the causalgiform variety that are triggered by partial nerve injury and maintained by sympathetic activity.