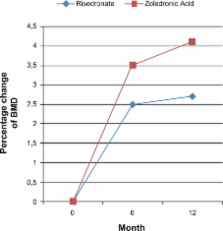 Glucocorticoids are essential in treating many disorders and they are widely used in spite of their negative impact on the skeletal system. As bisphosphonates reduce bone resorption through their action on osteoclasts, they play an important role in management of glucocorticoid-induced osteoporosis. Unlike other bisphosphonates, zoledronic acid is given by intravenous infusion and it has a potential advantage of increasing the compliance and adherence of patients when it is given 5 mg once a year. However, this treatment modality seems to be associated with more adverse events than oral administrations, and further studies with longer follow-up periods must be conducted to determine the safety and cost-effectiveness of long-term treatment with zoledronic acid.

Bisphosphonate-associated osteonecrosis of the jaw: report of a task force of the American Society for Bone and Mineral Research.

Suresh Mohla,  Marc McKee,  Ran-Sook Woo … (2007)
ONJ has been increasingly suspected to be a potential complication of bisphosphonate therapy in recent years. Thus, the ASBMR leadership appointed a multidisciplinary task force to address key questions related to case definition, epidemiology, risk factors, diagnostic imaging, clinical management, and future areas for research related to the disorder. This report summarizes the findings and recommendations of the task force. The increasing recognition that use of bisphosphonates may be associated with osteonecrosis of the jaw (ONJ) led the leadership of the American Society for Bone and Mineral Research (ASBMR) to appoint a task force to address a number of key questions related to this disorder. A multidisciplinary expert group reviewed all pertinent published data on bisphosphonate-associated ONJ. Food and Drug Administration drug adverse event reports were also reviewed. A case definition was developed so that subsequent studies could report on the same condition. The task force defined ONJ as the presence of exposed bone in the maxillofacial region that did not heal within 8 wk after identification by a health care provider. Based on review of both published and unpublished data, the risk of ONJ associated with oral bisphosphonate therapy for osteoporosis seems to be low, estimated between 1 in 10,000 and <1 in 100,000 patient-treatment years. However, the task force recognized that information on incidence of ONJ is rapidly evolving and that the true incidence may be higher. The risk of ONJ in patients with cancer treated with high doses of intravenous bisphosphonates is clearly higher, in the range of 1-10 per 100 patients (depending on duration of therapy). In the future, improved diagnostic imaging modalities, such as optical coherence tomography or MRI combined with contrast agents and the manipulation of image planes, may identify patients at preclinical or early stages of the disease. Management is largely supportive. A research agenda aimed at filling the considerable gaps in knowledge regarding this disorder was also outlined.

Adherence to bisphosphonate therapy and fracture rates in osteoporotic women: relationship to vertebral and nonvertebral fractures from 2 US claims databases.

Howard J. Rosen,  Robert T. Abbott,  James Arvesen … (2006)
To characterize the relationships between adherence (complance and persistence) to bisphosphonate therapy and risk of specific fracture types in postmenopausal women. Data were collected from 45 employers and 100 health plans in the continental United States from 2 claims databases during a 5-year period (January 1, 1999, through December 31, 2003). Claims from patients receiving a bisphosphonate prescription (alendronate or risedronate) were evaluated for 6 months before the Index prescription and during 24 months of follow-up to determine total, vertebral, and nonvertebral osteoporotic fractures, persistence (no gap in refills for >30 days during 24 months), and refill compliance (medication possession ratio > or = 0.80). The eligible cohort included 35,537 women (age, > or = 45 years) who received a bisphosphonate prescription. A subgroup with a specified diagnosis of postmenopausal osteoporosis was also evaluated. Forty-three percent were refill compliant, and 20% persisted with bisphosphonate therapy during the 24-month study period. Total, vertebral, nonvertebral, and hip fractures were significantly lower in refill-compliant and persistent patients, with relative risk reductions of 20% to 45%. The relationship between adherence and fracture risk remained significant after adjustment for baseline age, concomitant medications, and fracture history. There was a progressive relationship between refill compliance and fracture risk reduction, commencing at refill compliance rates of approximately 50% and becoming more pronounced at compliance rates of 75% and higher. Adherence to bisphosphonate therapy was associated with significantly fewer fractures at 24 months. Increasing refill compliance levels were associated with progressively lower fracture rates. These findings suggest that incremental changes in medication-taking habits could improve clinical outcomes of osteoporosis treatment.

Novel insights into actions of bisphosphonates on bone: differences in interactions with hydroxyapatite.

S Gulde,  A Mangood,  R. Phipps … (2006)
Bisphosphonates are now the most widely used drugs for diseases associated with increased bone resorption, such as osteoporosis. Although bisphosphonates act directly on osteoclasts, and interfere with specific biochemical processes such as protein prenylation, their ability to adsorb to bone mineral also contributes to their potency and duration of action. The aim of the present study was to compare the binding affinities for hydroxyapatite (HAP) of 6 bisphosphonates currently used clinically and to determine the effects of these bisphosphonates on other mineral surface properties including zeta potential and interfacial tension. Affinity constants (K(L)) for the adsorption of bisphosphonates were calculated from kinetic studies on HAP crystal growth using a constant composition method at 37 degrees C and at physiological ionic strength (0.15 M). Under conditions likely to simulate bisphosphonate binding onto bone, there were significant differences in K(L) among the bisphosphonates for HAP growth (pH 7.4) with a rank order of zoledronate > alendronate > ibandronate > risedronate > etidronate > clodronate. The measurements of zeta potential show that the crystal surface is modified by the adsorption of bisphosphonates in a manner best explained by molecular charges related to the protonation of their side-chain moieties, with risedronate showing substantial differences from alendronate, ibandronate, and zoledronate. The studies of the solid/liquid interfacial properties show additional differences among the bisphosphonates that may influence their mechanisms for binding and inhibiting crystal growth and dissolution. The observed differences in kinetic binding affinities, HAP zeta potentials, and interfacial tension are likely to contribute to the biological properties of the various bisphosphonates. In particular, these binding properties may contribute to differences in uptake and persistence in bone and the reversibility of effects. These properties, therefore, have potential clinical implications that may be important in understanding differences among potent bisphosphonates, such as the apparently more prolonged duration of action of alendronate and zoledronate compared with the more readily reversible effects of etidronate and risedronate.