Winter snow and ice can have a significant impact on our mobility, whether on foot or by car. Alongside plowing, arguably the greatest tool in combating snow and ice is salt. The most commonly used salt for winter maintenance is Sodium Chloride (NaCl), the same salt used in food and water softeners, is applied to roads, sidewalks, and parking lots as it is an effective deicer when temperatures are between 0°C and −12°C. Studies have shown that deicing with salt reduces accidents by 88% and injuries by 85% (Salt Institute 2017). The effectiveness of road salt, as well as its relative affordability, means that as much as four million tonnes may be applied annually in Canada for deicing (Environment Canada 2012). However, while salt is relatively inexpensive to purchase, there are a number of external costs that are becoming increasingly apparent. These include corrosion of vehicles and infrastructure like concrete, bridges, and water mains; damage and staining to the interior and exterior of buildings; impacts to roadside vegetation and soils; and the contamination of fresh water. In fact, the environmental impacts are such that it prompted Environment Canada to propose that winter salt be considered a toxic substance primarily due to the quantity that is applied annually (Environment Canada 2001).

The Lake Simcoe watershed, approximately 3,400km 2 in size, is situated just 20km north of Toronto, Ontario, with the southern portion of the watershed being considered part of the Greater Toronto Area (GTA), the most populous metropolitan area in Canada. As part of the GTA, the Lake Simcoe watershed has experienced and continues to experience considerable growth, and with this growth comes an increase in the amount of impervious surfaces requiring winter salting. Indeed, chloride has been showing a strong increasing trend in the urban creeks and in Lake Simcoe itself over the last 30 years. Even rural creeks are showing an increasing trend, albeit not as severe, nor are the concentrations of chloride reaching the same levels (LSRCA 2015). The highest chloride level recorded in a Lake Simcoe tributary was 6,120mg/l in the winter of 2013. Chloride guidelines for the protection of aquatic ecosystems utilize a guideline of 120mg/L for chronic exposure and 640mg/L for acute exposure (CCME 2011). While the high value recorded in the Lake Simcoe tributary greatly exceeds these guidelines, it is still drastically lower than values being recorded in larger, intensively urbanized catchments such as Cooksville Creek in Mississauga, Ontario, which sees concentrations in excess of 20,000 mg/L, the concentration of sea water, nearly every winter (Credit Valley Conservation personal comm). Similarly, in July of 2011 a small population of Atlantic blue crabs, a marine species, was found surviving in Mimico Creek in Toronto (Toronto Star: May 26, 2012). That a marine species was able to survive in this fresh water creek in summer demonstrates that the impacts of winter salt are not just limited to winter but are impacting shallow groundwater and thus summer baseflow, maintaining high chloride concentrations year round. The same is being seen in some urban creeks in the Lake Simcoe watershed, with summer baseflow concentrations exceeding the chronic guideline and trending upwards (LSRCA unpublished). While not yet as extreme as rivers in the more densely urbanized parts of the GTA, these examples foreshadow what is in store for Lake Simcoe rivers if current winter salt practices continue along with the projected urban growth.

During the winter of 2012 an estimated 99,300 tonnes of salt was applied in the Lake Simcoe watershed, an amount that equals nearly 250kg of salt per capita, or ~3 times the average person's body weight in salt. This estimate was generated through a survey of local road agencies along with the total area of commercial/institutional parking lots within the watershed. The exercise served to highlight a knowledge gap around application practices and rates in commercial/institutional parking lots. The majority of road agencies were found to record annual volumes, application dates and rates whereas literature values range from 10–40% of the salt applied in a catchment come from commercial/ institutional parking lots (Perera et al, 2009; Trowbridge et al, 2010; Lake Simcoe Region Conservation Authority, 2015), and a survey of winter maintenance contractors cite an average value of approximately 58g/m 2/application (Fu et al, 2013) ( Figure 1). 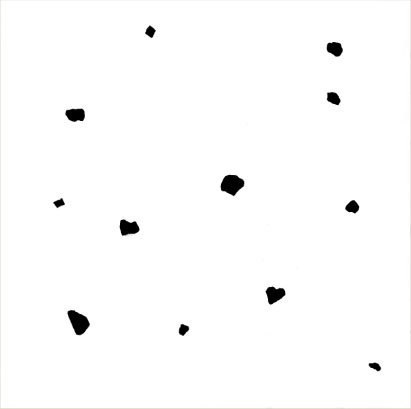 While these values were used in the estimation as they were the best available, observational data suggested these may be on the conservative side ( Figure 2). Therefore, monitoring of a 14 ha commercial lot was undertaken for the winters of 2014/15, 2015/16, and 2016/17 to better quantify the amount of salt coming from this type of land use. The winters of 2014/15 and 2016/17 saw similar applications of 1,067 and 1,010 tonnes applied respectively, while the mild winter of 2015/16 saw 556 tonnes applied. While the amounts varied somewhat each winter, the impacts downstream were consistent. Maximum concentrations recorded in the melt water reached 3.5 to 4 times the salt concentration of sea water every winter, equating to chloride concentrations of 70,000mg/L to 85,000mg/L; two orders of magnitude above the water quality guideline. 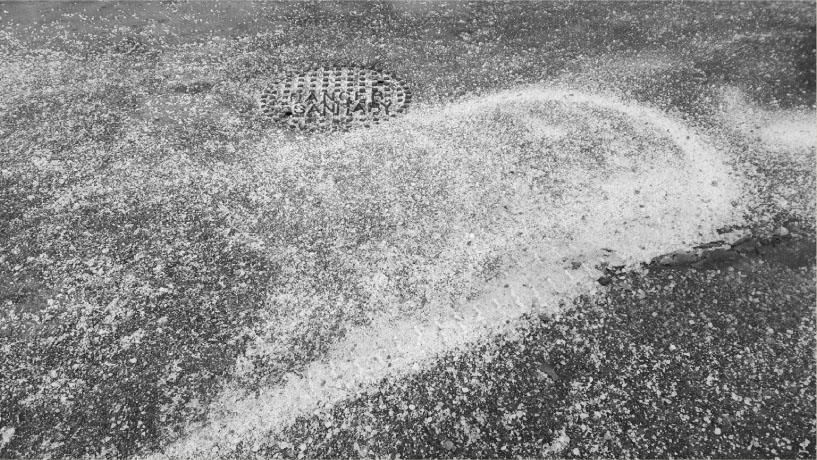 Example of excessive salt application in a commercial parking lot.

As with most parking lots constructed in the last two decades, the runoff from this parking lot is captured in a stormwater pond prior to entering the receiving watercourse. Interestingly, the winter salt also caused persistent chemical stratification in the permanent pool of the pond. The pond was monitored with continuous monitors for the ice free period of 2015 and 2016 (April to December) during which the bottom water chloride concentration remained distinct from the surface chloride concentration, indicating stratification ( Figure 3). This has two significant implications; first of which is that this pond, and therefore many other ponds like it, may not be functioning as designed which is leading to diminished performance (McEnroe 2012, Marsalek 2003). Second is that ponds are acting as salt reservoirs, slowly releasing salt year round and contributing to river chloride concentrations that continually exceed the chronic exposure guideline and thereby exposing aquatic life to harmful concentrations during sensitive life cycle stages. 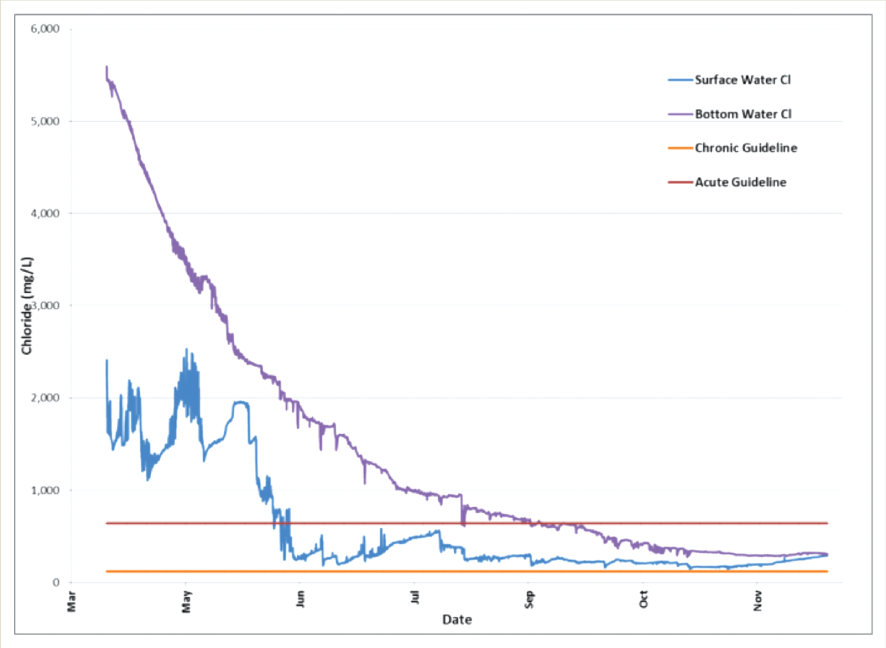 To determine the extent to which the catchment land use type impacts stormwater ponds, chemical profiles were measured on three ponds in February 2017. The catchments included the 24.6 ha commercial catchment with 14 ha of salt application surface, an institutional catchment (14.3 ha) with 6 ha of salt application area that includes parking lots and roads, and a 16.4 ha residential catchment with 3 ha of salt application area comprised of tertiary municipal roads. Interestingly, all three ponds showed chemical stratification, with the severity of the stratification and highest chloride concentrations relating to the amount of salt application area in the catchment. The residential pond yielded a maximum chloride concentration of 3,115mg/L in the bottom waters, the institutional yielded 16,144mg/L, and the commercial yielded 25,530 mg/L with chloride concentrations in the bottom 0.5m of the pond exceeding that of sea water. The maximum chloride concentration recorded in the receiving watercourse downstream of the commercial lot was measured at 5,406 mg/L, well in excess of the acute guideline of 640 mg/L. These results highlight that commercial parking lots are not only receiving a significant volume of salt but are also having the most dramatic impacts on receiving stormwater infrastructure and watercourses.

Selection of trees for tolerance to salt injury