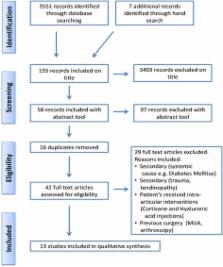 Databases: Medline, Embase, CINAHL, AMED, BNI and the Cochrane Library, were searched from inception to 2nd May, 2014. To be included participants must not have undergone any prior intervention. Two reviewers independently conducted the; searches, screening, data extraction and assessment of Risk of Bias using the Cochrane Risk of Bias Assessment Tool for non-Randomised Studies of Interventions (ACROBAT-NRSI). Only English language publications reporting findings in humans were included. The findings were summarised in narrative format.

Thirteen observational studies (involving 417 shoulders) were included in the review. Eight studies reported magnetic resonance imaging or arthrography findings and 5 recorded histological findings. When reported mean ages of the participants ranged from 40.0 to 59.8 years. Duration of symptoms ranged from 0 to 30 months. The majority of studies ( n = 7) were assessed to be of moderate risk of bias, two studies at high risk and the remaining four were rated as low risk of bias. Study characteristics were poorly reported and there was widespread variety observed between studies in respect of data collection methods and inclusion criteria employed. Pathological changes in the anterior shoulder joint capsule and related structures were commonly reported. Imaging identified pathological changes occurring in the coracohumeral ligament, axillary fold and rotator interval. Obliteration of the subcoracoid fat triangle also appeared to be pathognomonic. Histological studies were inconclusive but suggested that immune, inflammatory and fibrotic changes where associated with primary frozen shoulder.

This systematic review presents a summary of what is currently known about the tissue pathophysiology of primary frozen shoulder. Further studies that use standardised inclusion and exclusion criteria and investigate changes in naïve tissue at different stages of the condition are required.

R Kerlan,  Joseph Shaffer,  J Tibone (1992)
Sixty-two patients (sixty-eight shoulders) who had been treated non-operatively for idiopathic frozen shoulder were evaluated subjectively and objectively at two years and two months to eleven years and nine months of follow-up (average, seven years). Thirty-one (50 per cent) of these patients still had either mild pain or stiffness of the shoulder, or both. The range of motion averaged 161 degrees of forward flexion, 157 degrees of forward elevation, 149 degrees of abduction, 65 degrees of external rotation, and internal rotation to the level of the fifth thoracic spinous process. Thirty-seven (60 per cent) of the sixty-two patients still demonstrated some restriction of motion as compared with study-generated control values (calculated as the average motion, in each plane, for the thirty-seven unaffected shoulders of the patients who had unilateral disease). Ten patients had restriction of forward flexion; eight, of forward elevation; seventeen, of abduction; twenty-nine, of external rotation; and ten, of internal rotation. However, when the motion of each affected shoulder of thirty-seven patients who had unilateral involvement was compared with that of the unaffected contralateral shoulder, eleven (30 per cent) demonstrated some restriction. None of these patients had restriction of forward flexion; two had restriction of forward elevation; two, of abduction; seven, of external rotation; and seven, of internal rotation. The patients who had substantial restriction in three planes or more were thirteen times more likely to be men (p greater than 0.05). Marked restriction, when it was present, was most commonly in external rotation. Only seven patients (11 per cent) reported mild functional limitation.(ABSTRACT TRUNCATED AT 250 WORDS)

Joseph D Zuckerman,  Andrew S Rokito (2011)
Frozen shoulder (FS) is a common diagnosis treated by orthopaedic surgeons and other physicians caring for musculoskeletal problems. However, there is no standard definition and classification for this common condition.