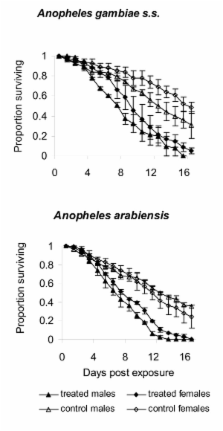 The entomopathogenic fungus Metarhizium anisopliae isolate IP 46, originating from a soil sample collected in 2001 in the Cerrado of Central Brazil, was tested for its ability to reduce the survival of adult male and female Anopheles gambiae s.s. and An. arabiensis mosquitoes. A 6-h exposure to the fungus coated on test paper at a concentration of 3.3 × 10 6 conidia cm -2 reduced the daily survival of both mosquito species (HR = 3.14, p < 0.001), with higher risk of dying in An. gambiae s.s relative to An. arabiensis (HR = 1.38, p < 0.001). Fungal sporulation was observed in >95% of mosquito cadavers in the treatment groups. The results indicate that M. anisopliae IP 46 has the potential to be a bio-control agent for African malaria vector species, and is a suitable candidate for further research and development.

An entomopathogenic fungus for control of adult African malaria mosquitoes.

Andrew Read,  Nina Jenkins,  Tracey Turner … (2005)
Using a rodent malaria model, we found that exposure to surfaces treated with fungal entomopathogens following an infectious blood meal reduced the number of mosquitoes able to transmit malaria by a factor of about 80. Fungal infection, achieved through contact with both solid surfaces and netting for durations well within the typical post-feed resting periods, was sufficient to cause >90% mortality. Daily mortality rates escalated dramatically around the time of sporozoite maturation, and infected mosquitoes showed reduced propensity to blood feed. Residual sprays of fungal biopesticides might replace or supplement chemical insecticides for malaria control, particularly in areas of high insecticide resistance.

Matthew B. Thomas,  Andrew Read (2007)
Recent research has raised the prospect of using insect fungal pathogens for the control of vector-borne diseases such as malaria. In the past, microbial control of insect pests in both medical and agricultural sectors has generally had limited success. We propose that it might now be possible to produce a cheap, safe and green tool for the control of malaria, which, in contrast to most chemical insecticides, will not eventually be rendered useless by evolution of resistance. Realizing this potential will require lateral thinking by biologists, technologists and development agencies.