Effects of amoxicillin/clavulanic acid on the pharmacokinetics of valproic acid 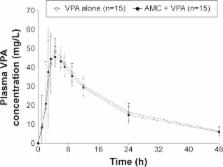 Valproic acid (VPA) is mainly metabolized via glucuronide, which is hydrolyzed by β-glucuronidase and undergoes enterohepatic circulation. Amoxicillin/clavulanic acid (AMC) administration leads to decreased levels of β-glucuronidase-producing bacteria, suggesting that these antibiotics could interrupt enterohepatic circulation and thereby alter the pharmacokinetics of VPA. This study aimed to evaluate the effects of AMC on the pharmacokinetics of VPA. This was an open-label, two-treatment, one-sequence study in 16 healthy volunteers. Two treatments were evaluated; treatment VPA, in which a single dose of VPA 500 mg was administered, and treatment AMC + VPA, in which multiple doses of AMC 500/125 mg were administered three times daily for 7 days and then a single dose of VPA was administered. Blood samples were collected up to 48 hours. Pharmacokinetic parameters were calculated using noncompartmental methods. Fifteen subjects completed the study. Systemic exposures and peak concentrations of VPA were slightly lower with treatment AMC + VPA than with treatment VPA (AUC last, 851.0 h·mg/L vs 889.6 h·mg/L; C max, 52.1 mg/L vs 53.0 mg/L). There were no significant between-treatment effects on pharmacokinetics (95% confidence interval [CI]) of AUC last and C max (95.7 [85.9–106.5] and 98.3 [91.6–105.6], respectively). Multiple doses of AMC had no significant effects on the pharmacokinetics of VPA; thus, no dose adjustment is necessary.

The effect of a multispecies probiotic on the intestinal microbiota and bowel movements in healthy volunteers taking the antibiotic amoxycillin.

Hans J. C. M. F. Koning,  Reinhold Stockbrugger,  Ellen Stobberingh … (2007)
One of the side effects of antimicrobial therapy is a disturbance of the intestinal microbiota potentially resulting in antibiotic-associated diarrhea (AAD). In this placebo-controlled double-blind study, the effect of a multispecies probiotic on the composition and metabolic activity of the intestinal microbiota and bowel habits was studied in healthy volunteers taking amoxycillin. Forty-one healthy volunteers were given 500 mg amoxycillin twice daily for 7 days and were randomized to either 5 g of a multispecies probiotic, Ecologic AAD (10(9) cfu/g), or placebo, twice daily for 14 days. Feces and questionnaires were collected on day 0, 7, 14, and 63. Feces was analyzed as to the composition of the intestinal microbiota, and beta-glucosidase activity, endotoxin concentration, Clostridium difficile toxin A, short chain fatty acids (SCFAs), and pH were determined. Bowel movements were scored according to the Bristol stool form scale. Mean number of enterococci increased significantly from log 4.1 at day 0 to log 5.8 (day 7) and log 6.9 (day 14) cfu/g feces (P or=3 per day for at least 2 days and/or a consistency >or=5 for at least 2 days were reported less frequently in the probiotic compared to the placebo group (48%vs 79%, P < 0.05). Apart from an increase in enterococci no significant differences in microbial composition and metabolic activity were observed in the probiotic compared with the placebo group. However, changes over time were present in both groups, which differed significantly between the probiotic and the placebo arm, suggesting that the amoxycillin effect was modulated by probiotic intake. Moreover, the intake of a multispecies probiotic significantly reduced diarrhea-like bowel movements in healthy volunteers receiving amoxycillin.

K Takemoto,  Leon N. Davies,  Dion R. Brocks … (2010)
Multiple peaking in the blood fluid concentration-time curve is a phenomenon occasionally encountered in pharmacokinetics. When it occurs, it can create difficulties in the determination and interpretation of pharmacokinetic parameters. Multiple peaking can occur as a consequence of a number of different mechanisms. These include, in addition to others, factors related to the formulation, be it the drug chemical entity itself or other formulation-related factors such as the excipients incorporated into the product design. Another contributing factor that can work in concert with the formulation is the physiological makeup of the gastrointestinal tract itself. This includes the pH and components of bile such as bile salts and phospholipids, the secretion of which is regulated by hormonal and dietary factors. In some cases, biochemical differences in the regional areas of the gastrointestinal tract, such as regio-specificity in bile concentrations and/or transport proteins, could contribute to windows for absorption that result in multiple peaking of xenobiotics. One of the most common sources of multiple peaking is contributed by biliary secretion followed by intestinal reabsorption of a drug, a process for which the term 'enterohepatic recycling' has been coined. This cause of multiple peaking is associated with special consideration in the calculation and interpretation of the drug clearance and volume of distribution. In this review, each of these various causes of multiple peaking is discussed, with incorporation of relevant examples for illustrative purposes.

Ecological effects of linezolid versus amoxicillin/clavulanic acid on the normal intestinal microflora.

C Nord,  S Ziege,  H Lode … (2000)
Twelve healthy subjects (6 females, 6 males; age range 18-40 y) participated in this trial. Linezolid was given as 600 mg tablets b.i.d. for 7 d and amoxicillin/clavulanic acid as 1000 mg tablets o.d. for 7 d. The washout period between the administration of the 2 antibacterial agents was 4 weeks. Faecal samples were collected prior to administration (Days -2 and -1), during administration (Days 4 and 8) and after administration (Days 14, 21 and 35) for microbiological analyses. The samples were diluted in pre-reduced media and inoculated aerobically and anaerobically on non-selective and selective media. Different colony types were identified to genus level by morphological, biochemical and molecular analyses. During the administration of linezolid, enterococci in the intestinal aerobic microflora were markedly suppressed while Klebsiella organisms increased in number. In the anaerobic microflora, the numbers of bifidobacteria, lactobacilli, clostridia and Bacteroides decreased markedly while no impact on the other anaerobic bacteria was observed. The microflora was normalized in all volunteers after 35 d. Amoxicillin/clavulanic acid administration caused increased numbers of enterococci and Escherichia coli in the aerobic intestinal microflora while numbers of bifidobacteria, lactobacilli and clostridia decreased significantly. Clostridium difficile strains were recovered from 3 of the volunteers. At the last visit, the intestinal microflora of the volunteers had returned to normal levels. The administration of linezolid mainly had an impact on the gram-positive bacteria and linezolid thus had an ecological profile different from that of amoxicillin/clavulanic acid.