Bromocriptine: A Sympatholytic, D2-Dopamine Agonist for the Treatment of Type 2 Diabetes 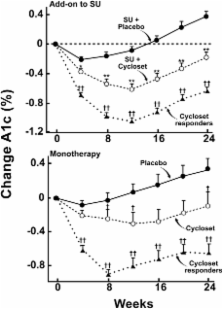 G M Reaven (1988)
Resistance to insulin-stimulated glucose uptake is present in the majority of patients with impaired glucose tolerance (IGT) or non-insulin-dependent diabetes mellitus (NIDDM) and in approximately 25% of nonobese individuals with normal oral glucose tolerance. In these conditions, deterioration of glucose tolerance can only be prevented if the beta-cell is able to increase its insulin secretory response and maintain a state of chronic hyperinsulinemia. When this goal cannot be achieved, gross decompensation of glucose homeostasis occurs. The relationship between insulin resistance, plasma insulin level, and glucose intolerance is mediated to a significant degree by changes in ambient plasma free-fatty acid (FFA) concentration. Patients with NIDDM are also resistant to insulin suppression of plasma FFA concentration, but plasma FFA concentrations can be reduced by relatively small increments in insulin concentration. Consequently, elevations of circulating plasma FFA concentration can be prevented if large amounts of insulin can be secreted. If hyperinsulinemia cannot be maintained, plasma FFA concentration will not be suppressed normally, and the resulting increase in plasma FFA concentration will lead to increased hepatic glucose production. Because these events take place in individuals who are quite resistant to insulin-stimulated glucose uptake, it is apparent that even small increases in hepatic glucose production are likely to lead to significant fasting hyperglycemia under these conditions. Although hyperinsulinemia may prevent frank decompensation of glucose homeostasis in insulin-resistant individuals, this compensatory response of the endocrine pancreas is not without its price. Patients with hypertension, treated or untreated, are insulin resistant, hyperglycemic, and hyperinsulinemic. In addition, a direct relationship between plasma insulin concentration and blood pressure has been noted. Hypertension can also be produced in normal rats when they are fed a fructose-enriched diet, an intervention that also leads to the development of insulin resistance and hyperinsulinemia. The development of hypertension in normal rats by an experimental manipulation known to induce insulin resistance and hyperinsulinemia provides further support for the view that the relationship between the three variables may be a causal one.(ABSTRACT TRUNCATED AT 400 WORDS)