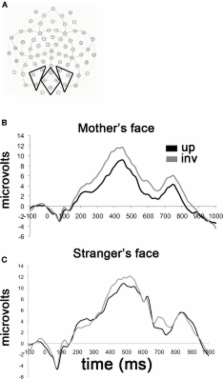 Infant face processing becomes more selective during the first year of life as a function of varying experience with distinct face categories defined by species, race, and age. Given that any individual face belongs to many such categories (e.g. A young Caucasian man's face) we asked how the neural selectivity for one aspect of facial appearance was affected by category membership along another dimension of variability. 6-month-old infants were shown upright and inverted pictures of either their own mother or a stranger while event-related potentials (ERPs) were recorded. We found that the amplitude of the P400 (a face-sensitive ERP component) was only sensitive to the orientation of the mother's face, suggesting that “tuning” of the neural response to faces is realized jointly across multiple dimensions of face appearance.

A unified account of the effects of distinctiveness, inversion, and race in face recognition.

DANIEL T. VALENTINE (1991)
A framework is outlined in which individual faces are assumed to be encoded as a point in a multidimensional space, defined by dimensions that serve to discriminate faces. It is proposed that such a framework can account for the effects of distinctiveness, inversion, and race on recognition of faces. Two specific models within this framework are identified: a norm-based coding model, in which faces are encoded as vectors from a population norm or prototype, and a purely exemplar-based model. Both models make similar predictions, albeit in different ways, concerning the interactions between the effects of distinctiveness, inversion and race. These predictions were supported in five experiments in which photographs of faces served as stimuli. The norm-based coding version and the exemplar-based version of the framework cannot be distinguished on the basis of the experiments reported, but it is argued that a multidimensional space provides a useful heuristic framework to investigate recognition of faces. Finally, the relationship between the specific models is considered and an implementation in terms of parallel distributed processing is briefly discussed.

Is face processing species-specific during the first year of life?

O Pascalis (2002)
Between 6 and 10 months of age, the infant's ability to discriminate among native speech sounds improves, whereas the same ability to discriminate among foreign speech sounds decreases. Our study aimed to determine whether this perceptual narrowing is unique to language or might also apply to face processing. We tested discrimination of human and monkey faces by 6-month-olds, 9-month-olds, and adults, using the visual paired-comparison procedure. Only the youngest group showed discrimination between individuals of both species; older infants and adults only showed evidence of discrimination of their own species. These results suggest that the "perceptual narrowing" phenomenon may represent a more general change in neural networks involved in early cognition.

Edited by: Silvia A. Bunge, University of California at Berkeley, USA