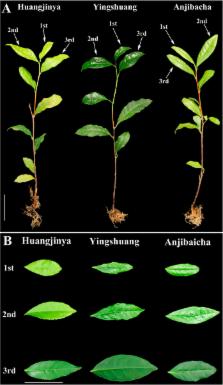 Ascorbic acid (AsA), known as vitamin C, is an essential nutrient for humans and mainly absorbed from food. Tea plant ( Camellia sinensis (L.) O. Kuntze) leaves can be a dietary source of AsA for humans. However, experimental evidence on the biosynthesis, recycling pathway and distribution of AsA during leaf development in tea plants is unclear. To gain insight into the mechanism and distribution of AsA in the tea plant leaf, we identified 18 related genes involved in AsA biosynthesis and recycling pathway based on the transcriptome database of tea plants. Tea plant leaves were used as samples at different developmental stages. AsA contens in tea plant leaves at three developmental stages were measured by reversed-phase high-performance liquid chromatography (RP-HPLC). The correlations between expression levels of these genes and AsA contents during the development of tea plant leaves were discussed. Results indicated that the l-galactose pathway might be the primary pathway of AsA biosynthesis in tea plant leaves. CsMDHAR and CsGGP might play a regulatory role in AsA accumulation in the leaves of three cultivars of tea plants. These findings may provide a further glimpse to improve the AsA accumulation in tea plants and the commercial quality of tea.

The biosynthetic pathway of vitamin C in higher plants.

Sadie G. Wheeler,  N Smirnoff,  Duane M. North (1998)
Vitamin C (L-ascorbic acid) has important antioxidant and metabolic functions in both plants and animals, but humans, and a few other animal species, have lost the capacity to synthesize it. Plant-derived ascorbate is thus the major source of vitamin C in the human diet. Although the biosynthetic pathway of L-ascorbic acid in animals is well understood, the plant pathway has remained unknown-one of the few primary plant metabolic pathways for which this is the case. L-ascorbate is abundant in plants (found at concentrations of 1-5 mM in leaves and 25 mM in chloroplasts) and may have roles in photosynthesis and transmembrane electron transport. We found that D-mannose and L-galactose are efficient precursors for ascorbate synthesis and are interconverted by GDP-D-mannose-3,5-epimerase. We have identified an enzyme in pea and Arabidopsis thaliana, L-galactose dehydrogenase, that catalyses oxidation of L-galactose to L-galactono-1,4-lactone. We propose an ascorbate biosynthesis pathway involving GDP-D-mannose, GDP-L-galactose, L-galactose and L-galactono-1,4-lactone, and have synthesized ascorbate from GDP-D-mannose by way of these intermediates in vitro. The definition of this biosynthetic pathway should allow engineering of plants for increased ascorbate production, thus increasing their nutritional value and stress tolerance.

L Caballero,  Juan Blanco,  R Lamothe … (2003)
L-Ascorbic acid (vitamin C) in fruits and vegetables is an essential component of human nutrition. Surprisingly, only limited information is available about the pathway(s) leading to its biosynthesis in plants. Here, we report the isolation and characterization of GalUR, a gene from strawberry that encodes an NADPH-dependent D-galacturonate reductase. We provide evidence that the biosynthesis of L-ascorbic acid in strawberry fruit occurs through D-galacturonic acid, a principal component of cell wall pectins. Expression of GalUR correlated with changing ascorbic acid content in strawberry fruit during ripening and with variations in ascorbic acid content in fruit of different species of the genus Fragaria. Reduced pectin solubilization in cell walls of transgenic strawberry fruit with decreased expression of an endogenous pectate lyase gene resulted in lower ascorbic acid content. Overexpression of GalUR in Arabidopsis thaliana enhanced vitamin C content two- to threefold, demonstrating the feasibility of engineering increased vitamin C levels in plants using this gene.