The diverse echinostomes from East Africa: With a focus on species that use Biomphalaria and Bulinus as intermediate hosts 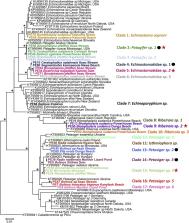 Echinostomes are a diverse group of digenetic trematodes that are globally distributed. The diversity of echinostomes in Africa remains largely unknown, particularly in analyses using molecular markers. Therefore, we were interested in the composition and host usage patterns of African echinostomes, especially those that also use schistosome transmitting snails as intermediate hosts. We collected adults and larval stages of echinostomes from 19 different localities in East Africa (1 locality in Uganda and 18 in Kenya). In this study we provide locality information, host use, museum vouchers, and genetic data for two loci (28S and nad1) from 98 samples of echinostomes from East Africa. Combining morphological features, host use information, and phylogenetic analyses we found 17 clades of echinostomes in East Africa. Four clades were found to use more than one genus of freshwater snails as their first intermediate hosts. We also determined at least partial life cycles (2 of the 3) of four clades using molecular markers. Of the 17 clades, 13 use Biomphalaria or Bulinus as a first intermediate host. The overlap in host usage creates opportunities for competition, including against human schistosomes. Thus, our study can be used as a foundation for future studies to ascertain the interactions between schistosomes and echinostomes in their respective intermediate hosts.

David J Civitello, Jeremy Cohen, Hiba Fatima … (2015)
Infectious diseases of humans, wildlife, and domesticated species are increasing worldwide, driving the need to understand the mechanisms that shape outbreaks. Simultaneously, human activities are drastically reducing biodiversity. These concurrent patterns have prompted repeated suggestions that biodiversity and disease are linked. For example, the dilution effect hypothesis posits that these patterns are causally related; diverse host communities inhibit the spread of parasites via several mechanisms, such as by regulating populations of susceptible hosts or interfering with parasite transmission. However, the generality of the dilution effect hypothesis remains controversial, especially for zoonotic diseases of humans. Here we provide broad evidence that host diversity inhibits parasite abundance using a meta-analysis of 202 effect sizes on 61 parasite species. The magnitude of these effects was independent of host density, study design, and type and specialization of parasites, indicating that dilution was robust across all ecological contexts examined. However, the magnitude of dilution was more closely related to the frequency, rather than density, of focal host species. Importantly, observational studies overwhelmingly documented dilution effects, and there was also significant evidence for dilution effects of zoonotic parasites of humans. Thus, dilution effects occur commonly in nature, and they may modulate human disease risk. A second analysis identified similar effects of diversity in plant-herbivore systems. Thus, although there can be exceptions, our results indicate that biodiversity generally decreases parasitism and herbivory. Consequently, anthropogenic declines in biodiversity could increase human and wildlife diseases and decrease crop and forest production.

Phylogenies without roots? A plea for the use of vouchers in molecular phylogenetic studies.

James C Wilgenbusch, David Swofford (2003)
This unit provides a general description of reconstructing evolutionary trees using PAUP* 4.0. The protocol takes users through an example analysis of mitochondrial DNA sequence data using the parsimony and the likelihood criteria to infer optimal trees. The protocol also discusses searching options available in PAUP* and demonstrates how to import non-NEXUS formats. Finally, a general discussion is given regarding the pros and cons of the "model-free" and "model-based" methods used throughout the protocol.