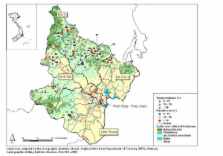 In Vietnam, a large proportion of all malaria cases and deaths occurs in the central mountainous and forested part of the country. Indeed, forest malaria, despite intensive control activities, is still a major problem which raises several questions about its dynamics.

A large-scale malaria morbidity survey to measure malaria endemicity and identify important risk factors was carried out in 43 villages situated in a forested area of Ninh Thuan province, south central Vietnam. Four thousand three hundred and six randomly selected individuals, aged 10–60 years, participated in the survey. Rag Lays (86%), traditionally living in the forest and practising "slash and burn" cultivation represented the most common ethnic group. The overall parasite rate was 13.3% (range [0–42.3] while Plasmodium falciparum seroprevalence was 25.5% (range [2.1–75.6]). Mapping of these two variables showed a patchy distribution, suggesting that risk factors other than remoteness and forest proximity modulated the human-vector interactions. This was confirmed by the results of the multivariate-adjusted analysis, showing that forest work was a significant risk factor for malaria infection, further increased by staying in the forest overnight (OR= 2.86; 95%CI [1.62; 5.07]). Rag Lays had a higher risk of malaria infection, which inversely related to education level and socio-economic status. Women were less at risk than men (OR = 0.71; 95%CI [0.59; 0.86]), a possible consequence of different behaviour. This study confirms that malaria endemicity is still relatively high in this area and that the dynamics of transmission is constantly modulated by the behaviour of both humans and vectors. A well-targeted intervention reducing the "vector/forest worker" interaction, based on long-lasting insecticidal material, could be appropriate in this environment.

The economic and social burden of malaria.

Paul M. Emerson,  M Pinder,  Robert Lindsay … (2003)
House design may affect an individual's exposure to malaria parasites, and hence to disease. We conducted a randomized-controlled study using experimental huts in rural Gambia, to determine whether installing a ceiling or closing the eaves could protect people from malaria mosquitoes. Five treatments were tested against a control hut: plywood ceiling; synthetic-netting ceiling; insecticide-treated synthetic-netting ceiling (deltamethrin 12.5 mg/m2); plastic insect-screen ceiling; or the eaves closed with mud. The acceptability of such interventions was investigated by discussions with local communities. House entry by Anopheles gambiae, the principal African malaria vector, was reduced by the presence of a ceiling: plywood (59% reduction), synthetic-netting (79%), insecticide-treated synthetic-netting (78%), plastic insect-screen (80%, P < 0.001 in all cases) and closed eaves (37%, ns). Similar reductions were also seen with Mansonia spp., vectors of lymphatic filariasis and numerous arboviruses. Netting and insect-screen ceilings probably work as decoy traps attracting mosquitoes into the roof space, but not the room. Ceilings are likely to be well accepted and may be of greatest benefit in areas of low to moderate transmission and when used in combination with other malaria control strategies.

L D Cong,  K Keokenchanh,  M. Coosemans … (2004)
During the last decade, major progress in malaria control has been achieved in Vietnam, Laos and Cambodia. However, malaria is still a potentially fatal disease in some hilly-forested areas and continues to be endemic in a few coastal foci. To estimate the risk that stems from the major vectors after a decade of intensive malaria control, an entomological study based on human landing collections was conducted between April 1998 and November 2000 in six study villages (four in Vietnam, one in Cambodia and one in Laos) located in different physio-geographical areas. Five villages were selected in places where new cases of malaria still occurred. In the sixth village, in the northern hilly area of Vietnam, no case of malaria was detected during the past 3 years. In three study villages of the hilly forested areas of Cambodia and central Vietnam, Anopheles dirus A still played an important role in malaria transmission and maintain perennial transmission inside the villages despite its low density. Anopheles minimus A was found in all study villages except in the southern coastal village of Vietnam. Its role in malaria transmission, however, varied between localities and surveys. In one study village of central Vietnam it was almost absent (one specimen collected over 480 man nights), and in another village sporozoite positive specimens (2.8%) were only observed during the first two surveys whereas this species disappeared from the collections from November 1998 onwards (six surveys: 360 man nights). In the northern study site An. minimus A and C were found in all collections, but no local malaria transmission occurred. However, the constant presence of these two species associated with a high longevity (parous rate up around 80% and 65%, respectively), suggests that transmission can occur at almost any time if parasite reservoirs are reintroduced in the area. The proper management of malaria cases and population movement is, therefore, important to prevent outbreaks and the reintroduction of malaria in northern Vietnam. In the study site of the Mekong delta, An. sundaicus occurred at high densities (up to 190 bites/man/night). The recent changes in land use from rice cultivation to shrimp farming probably explains the increase of this brackish water breeding species during the study period. However, none of the 11,002 specimens was positive for Plasmodium circumsporozoite protein (CSP). The relative low survival rate as estimated by the parous rate (around 47%) may reflect its low vectorial status that could explain the very low malaria incidence (1.9 case/100 persons/year) in this study site. A calculated sporozoite rate of maximum 1/300,000 is enough to explain this low malaria incidence. Despite the successes in malaria control, the vector An. dirus A continues to play an important role in malaria transmission, whereas An. minimus A showed temporal and spatial variation in its role as vector. The role of An. sundaicus as vector could not be confirmed because of the low incidence in the coastal study village. Other Anopheles species may be locally involved, but in the five study villages where malaria is still present they probably do not contribute significantly to malaria transmission. The study also points towards the fact that in Southeast Asia it will become increasingly difficult to incriminate Anopheles species in malaria transmission while the risk for malaria transmission still persist.