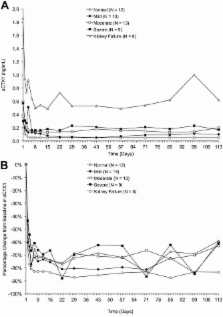 This 16-week study evaluated pharmacokinetics and pharmacodynamics of denosumab in 55 subjects with renal function ranging from normal to dialysis-dependent kidney failure. Participants received a single 60-mg subcutaneous dose of denosumab. Kidney function groups were based on calculations using the Cockcroft-Gault equation and U.S. Food and Drug Administration (FDA) guidance in place when the study was designed. Renal function did not have a significant effect on denosumab pharmacokinetics or pharmacodynamics. These findings suggest denosumab dose adjustment based on glomerular filtration rate is not required. Rapid decreases in serum C-telopeptide in all groups were sustained throughout the study. The most common adverse events were hypocalcemia (15%), pain in extremity (15%), and nausea (11%). Most adverse events were mild to moderate in severity. Calcium and vitamin D supplementation was not initially required by the study protocol, but was added during the trial. No subject who received adequate calcium and vitamin D supplementation became hypocalcemic. Seven subjects had nadir serum calcium concentrations between 7.5 and <8.0 mg/dL (1.9 and <2.0 mmol/L), and 5 subjects (4 with advanced renal disease) had nadir serum calcium <7.5 mg/dL (<1.9 mmol/L). Two subjects (1 symptomatic, 1 asymptomatic) were hospitalized for intravenous calcium gluconate treatment. At the recommended dose, denosumab is a useful therapeutic option for patients with impaired renal function. Supplementation of calcium and vitamin D is strongly recommended when patients initiate denosumab therapy, particularly in patients with reduced renal function. © 2012 American Society for Bone and Mineral Research.

Osteoclast differentiation factor is a ligand for osteoprotegerin/osteoclastogenesis-inhibitory factor and is identical to TRANCE/RANKL.

Masami K. Yamaguchi,  M Goto,  Kenji Yano … (1998)
Osteoclasts, the multinucleated cells that resorb bone, develop from hematopoietic cells of monocyte/macrophage lineage. Osteoclast-like cells (OCLs) are formed by coculturing spleen cells with osteoblasts or bone marrow stromal cells in the presence of bone-resorbing factors. The cell-to-cell interaction between osteoblasts/stromal cells and osteoclast progenitors is essential for OCL formation. Recently, we purified and molecularly cloned osteoclastogenesis-inhibitory factor (OCIF), which was identical to osteoprotegerin (OPG). OPG/OCIF is a secreted member of the tumor necrosis factor receptor family and inhibits osteoclastogenesis by interrupting the cell-to-cell interaction. Here we report the expression cloning of a ligand for OPG/OCIF from a complementary DNA library of mouse stromal cells. The protein was found to be a member of the membrane-associated tumor necrosis factor ligand family and induced OCL formation from osteoclast progenitors. A genetically engineered soluble form containing the extracellular domain of the protein induced OCL formation from spleen cells in the absence of osteoblasts/stromal cells. OPG/OCIF abolished the OCL formation induced by the protein. Expression of its gene in osteoblasts/stromal cells was up-regulated by bone-resorbing factors. We conclude that the membrane-bound protein is osteoclast differentiation factor (ODF), a long-sought ligand mediating an essential signal to osteoclast progenitors for their differentiation into osteoclasts. ODF was found to be identical to TRANCE/RANKL, which enhances T-cell growth and dendritic-cell function. ODF seems to be an important regulator in not only osteoclastogenesis but also immune system.

A single-dose placebo-controlled study of AMG 162, a fully human monoclonal antibody to RANKL, in postmenopausal women.

Alex M. DePaoli,  Cornelis P J Bekker,  Robyn Murphy … (2004)
The safety and bone antiresorptive effect of a single subcutaneous dose of AMG 162, a human monoclonal antibody to RANKL, was investigated in 49 postmenopausal women. AMG 162 is a potent antiresorptive agent for diseases such as osteoporosis. RANKL is an essential osteoclastic differentiation and activation factor. The bone antiresorptive activity and safety of AMG 162, a fully human monoclonal antibody to RANKL, were evaluated in postmenopausal women in this randomized, double-blind, placebo-controlled, single-dose, dose escalation study. Six cohorts of eight to nine women were randomly assigned to receive a single subcutaneous injection of either AMG 162 or placebo (3:1 ratio). AMG 162 doses were 0.01, 0.03, 0.1, 0.3, 1.0, and 3.0 mg/kg. Subjects were followed up to 6 months in all cohorts and 9 months in the three highest dose cohorts. Second morning void urinary N-telopeptide/creatinine (NTX; Osteomark), serum NTX, and serum bone-specific alkaline phosphatase (BALP, Ostase) were assessed as bone turnover markers. Forty-nine women were enrolled. A single subcutaneous dose of AMG 162 resulted in a dose-dependent, rapid (within 12 h), profound (up to 84%), and sustained (up to 6 months) decrease in urinary NTX. At 6 months, there was a mean change from baseline of -81% in the 3.0 mg/kg AMG 162 group compared with -10% in the placebo group; serum NTX changes were -56% and 2%, respectively. BALP levels did not decrease remarkably until after 1 month, indicating that the effect of AMG 162 is primarily antiresorptive. Intact parathyroid hormone (PTH) levels increased up to approximately 3-fold after 4 days in the 3.0 mg/kg dose group, but returned toward baseline with follow-up. Albumin-adjusted serum calcium did not decrease >10% on average in any group, and no subject had values below 2 mmol/liter. AMG 162 was well tolerated. No related serious adverse events occurred. No clinically meaningful laboratory changes, other than those described above, were observed. In summary, a single subcutaneous dose of AMG 162 resulted in a dose-dependent rapid and sustained decrease from baseline in bone turnover and could be an effective and convenient treatment for osteoporosis.

Re-use of this article is permitted in accordance with the Terms and Conditions set out at http://wileyonlinelibrary.com/onlineopen#OnlineOpen_Terms.