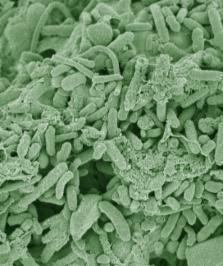 Seed sprouts (alfalfa, mung bean, radish, etc.) have been implicated in several recent national and international outbreaks of salmonellosis. Conditions used for sprouting are also conducive to the growth of Salmonella. As a result, this pathogen can quickly grow to very high cell densities during sprouting without any detectable organoleptic impact. Seed sprouts typically also support heavy growth (~10 8 CFU g −1) of a heterogeneous microbiota consisting of various bacterial, yeast, and mold species, often dominated by non-pathogenic members of the family Enterobacteriaceae. This heavy background may present challenges to the detection of Salmonella, especially if this pathogen is present in relatively low numbers. We combined DNA-based fluorescence in situ hybridization (FISH) with flow cytometry (FCM) for the rapid molecular detection of Salmonella enterica ser. Typhimurium in artificially contaminated alfalfa and other seed sprouts. Components of the assay included a set of cooperatively binding probes, a chemical blocking treatment intended to reduce non-specific background, and sample concentration via tangential flow filtration (TFF). We were able to detect S. Typhimurium in sprout wash at levels as low as 10 3 CFU ml −1 sprout wash (10 4 CFU g −1 sprouts) against high microbial backgrounds (~10 8 CFU g −1 sprouts). Hybridization times were typically 30 min, with additional washing, but we ultimately found that S. Typhimurium could be readily detected using hybridization times as short as 2 min, without a wash step. These results clearly demonstrate the potential of combined DNA-FISH and FCM for rapid detection of Salmonella in this challenging food matrix and provide industry with a useful tool for compliance with sprout production standards proposed in the Food Safety Modernization Act (FSMA).

A membrane-filter technique for the detection of complementary DNA.

Michael Schmid,  Stefan Kutter,  Anton Hartmann (2006)
Colonization of barley plants by the food-borne pathogens Salmonella enterica serovar typhimurium and three Listeria spp. (L. monocytogenes, L. ivanovii, L. innocua) was investigated in a monoxenic system. Herbaspirillum sp. N3 was used as a positive control and Escherichia coli HB101 as a negative control for endophytic root colonization. Colonization of the plants was tested 1-4 weeks after inoculation by determination of CFU, specific PCR assays and fluorescence in situ hybridization (FISH) with fluorescently labelled oligonucleotide probes in combination with confocal laser scanning microscopy (CLSM). Both S. enterica strains were found as endophytic colonizers of barley roots and reached up to 2.3 x 10(6) CFU per g root fresh weight after surface sterilization. The three Listeria strains had 10-fold fewer cell numbers after surface sterilization on the roots and therefore were similar to the results of nonendophytic colonizers, such as E. coli HB101. The FISH/CSLM approach demonstrated not only high-density colonization of the root hairs and the root surface by S. enterica but also a spreading to subjacent rhizodermis layers and the inner root cortex. By contrast, the inoculated Listeria spp. colonized the root hair zone but did not colonize other parts of the root surface. Endophytic colonization of Listeria spp. was not observed. Finally, a systemic spreading of S. enterica to the plant shoot (stems and leaves) was demonstrated using a specific PCR analysis and plate count technique.