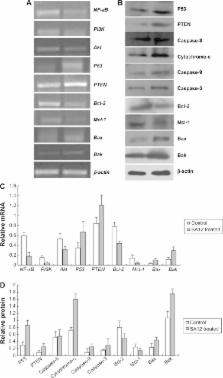 Breast cancer is considered to be the most common malignancy in women. Treatment of breast cancer has been focused on molecular targeted therapy, and anticancer peptides are considered to be some of the most promising candidate drugs. In the current study, we used mRNA-peptide display technology to screen antibreast cancer peptides and identified a novel peptide, SA12, which showed significant activity in the inhibition of proliferation and induction of apoptosis in SKBr-3 breast cancer cells. The mechanism by which SA12 peptide triggers apoptosis was further investigated using a pull-down assay, reverse transcription-polymerase chain reaction, and Western blotting analysis. The results demonstrated that this peptide could interact with tumor-associated proteins MECP2 and CDC20B, which further induced apoptosis of tumor cells via the mitochondrial pathway involving the Bcl-2 family and related caspases. We propose that the novel SA12 peptide has the potential to provide a new strategy for the development of targeted therapy in breast cancer.

The future of peptide-based drugs.

David Fairlie,  David J. Craik,  Spiros Liras … (2012)
The suite of currently used drugs can be divided into two categories - traditional 'small molecule' drugs with typical molecular weights of 5000 Da that are not orally bioavailable and need to be delivered via injection. Due to their small size, conventional small molecule drugs may suffer from reduced target selectivity that often ultimately manifests in human side-effects, whereas protein therapeutics tend to be exquisitely specific for their targets due to many more interactions with them, but this comes at a cost of low bioavailability, poor membrane permeability, and metabolic instability. The time has now come to reinvestigate new drug leads that fit between these two molecular weight extremes, with the goal of combining advantages of small molecules (cost, conformational restriction, membrane permeability, metabolic stability, oral bioavailability) with those of proteins (natural components, target specificity, high potency). This article uses selected examples of peptides to highlight the importance of peptide drugs, some potential new opportunities for their exploitation, and some difficult challenges ahead in this field. © 2012 John Wiley & Sons A/S.

Irene M. Ghobrial,  Thomas Witzig,  Alex Adjei (2015)
Apoptosis, or programmed cell death, is a mechanism by which cells undergo death to control cell proliferation or in response to DNA damage. The understanding of apoptosis has provided the basis for novel targeted therapies that can induce death in cancer cells or sensitize them to established cytotoxic agents and radiation therapy. These novel agents include those targeting the extrinsic pathway such as tumor necrosis factor-related apoptosis-inducing ligand receptor 1, and those targeting the intrinsic Bcl-2 family pathway such as antisense bcl-2 oligonucleotides. Many pathways and proteins control the apoptosis machinery. Examples include p53, the nuclear factor kappa B, the phosphatidylinositol 3 kinase pathway, and the ubiquitin/proteosome pathway. These can be targeted by specific modulators such as bortezomib, and mammalian target of rapamycin inhibitors such as CCI-779 and RAD 001. Because these pathways may be preferentially altered in tumor cells, there is potential for a selective effect in tumors sparing normal tissue. This article reviews the current understanding of the apoptotic pathways, including the extrinsic (cytoplasmic) and intrinsic (mitochondrial) pathways, and the agents being developed to target these pathways.

Roles of the RAF/MEK/ERK and PI3K/PTEN/AKT pathways in malignant transformation and drug resistance.

Teresa Franklin,  Linda S. Steelman,  Franca Stivala … (2005)
The Ras/Raf/MEK/ERK and PI3K/PTEN/AKT signaling cascades play critical roles in the transmission of signals from growth factor receptors to regulate gene expression and prevent apoptosis. Components of these pathways are mutated or aberrantly expressed in human cancer (e.g., Ras, B-Raf, PI3K, PTEN, Akt). Also, mutations occur at genes encoding upstream receptors (e.g., EGFR and Flt-3) and chimeric chromosomal translocations (e.g., BCR-ABL) which transmit their signals through these cascades. These pathways interact with each other to regulate growth and in some cases tumorigenesis. For example, in some cells, PTEN mutation may contribute to suppression of the Raf/MEK/ERK cascade due to the ability of elevated activated Akt levels to phosphorylate and inactivate Raf-1. We have investigated the genetic structures and functional roles of these two signaling pathways in the malignant transformation and drug resistance of hematopoietic, breast and prostate cancer cells. Although both of these pathways are commonly thought to have anti-apoptotic and drug resistance effects on cells, they display different cell-lineage-specific effects. Induced Raf expression can abrogate the cytokine dependence of certain hematopoietic cell lines (FDC-P1 and TF-1), a trait associated with tumorigenesis. In contrast, expression of activated PI3K or Akt does not abrogate the cytokine dependence of these hematopoietic cell lines, but does have positive effects on cell survival. However, activated PI3K and Akt can synergize with activated Raf to abrogate the cytokine dependence of another hematopoietic cell line (FL5.12) which is not transformed by activated Raf expression by itself. Activated Raf and Akt also confer a drug-resistant phenotype to these cells. Raf is more associated with proliferation and the prevention of apoptosis while Akt is more associated with the long-term clonogenicity. In breast cancer cells, activated Raf conferred resistance to the chemotherapeutic drugs doxorubicin and paclitaxel. Raf induced the expression of the drug pump Mdr-1 (a.k.a., Pgp) and the Bcl-2 anti-apoptotic protein. Raf did not appear to induce drug resistance by altering p53/p21Cip-1 expression, whose expression is often linked to regulation of cell cycle progression and drug resistance. Deregulation of the PI3K/PTEN/Akt pathway was associated with resistance to doxorubicin and 4-hydroxyl tamoxifen, a chemotherapeutic drug and estrogen receptor antagonist used in breast cancer therapy. In contrast to the drug-resistant breast cancer cells obtained after overexpression of activated Raf, cells expressing activated Akt displayed altered (decreased) levels of p53/p21Cip-1. Deregulated expression of the central phosphatase in the PI3K/PTEN/Akt pathway led to breast cancer drug resistance. Introduction of mutated forms of PTEN, which lacked lipid phosphatase activity, increased the resistance of the MCF-7 cells to doxorubicin, suggesting that these lipid phosphatase deficient PTEN mutants acted as dominant negative mutants to suppress wild-type PTEN activity. Finally, the PI3K/PTEN/Akt pathway appears to be more prominently involved in prostate cancer drug resistance than the Raf/MEK/ERK pathway. Some advanced prostate cancer cells express elevated levels of activated Akt which may suppress Raf activation. Introduction of activated forms of Akt increased the drug resistance of advanced prostate cancer cells. In contrast, introduction of activated forms of Raf did not increase the drug resistance of the prostate cancer cells. In contrast to the results observed in hematopoietic cells, Raf may normally promote differentiation in prostate cells which is suppressed in advanced prostate cancer due to increased expression of activated Akt arising from PTEN mutation. Thus in advanced prostate cancer it may be advantageous to induce Raf expression to promote differentiation, while in hematopoietic cancers it may be beneficial to inhibit Raf/MEK/ERK-induced proliferation. These signaling and anti-apoptotic pathways can have different effects on growth, prevention of apoptosis and induction of drug resistance in cells of various lineages which may be due to the expression of lineage-specific factors.