In Silico Studies in Drug Research Against Neurodegenerative Diseases 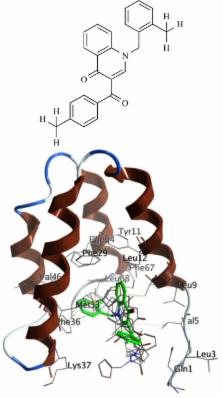 Neurodegenerative diseases such as Alzheimer's disease (AD), amyotrophic lateral sclerosis, Parkinson's disease (PD), spinal cerebellar ataxias, and spinal and bulbar muscular atrophy are described by slow and selective degeneration of neurons and axons in the central nervous system (CNS) and constitute one of the major challenges of modern medicine. Computer-aided or in silico drug design methods have matured into powerful tools for reducing the number of ligands that should be screened in experimental assays.

Detailed analysis of the recently reported case studies revealed that the majority of them use a sequential combination of ligand and structure-based virtual screening techniques, with particular focus on pharmacophore models and the docking approach.

Neurodegenerative diseases have a multifactorial pathoetiological origin, so scientists have become persuaded that a multi-target therapeutic strategy aimed at the simultaneous targeting of multiple proteins (and therefore etiologies) involved in the development of a disease is recommended in future.

M. Parrinello,  A Laio (2002)
We introduce a novel and powerful method for exploring the properties of the multidimensional free energy surfaces of complex many-body systems by means of a coarse-grained non-Markovian dynamics in the space defined by a few collective coordinates.A characteristic feature of this dynamics is the presence of a history-dependent potential term that, in time, fills the minima in the free energy surface, allowing the efficient exploration and accurate determination of the free energy surface as a function of the collective coordinates. We demonstrate the usefulness of this approach in the case of the dissociation of a NaCl molecule in water and in the study of the conformational changes of a dialanine in solution.

G Klebe,  M Rarey,  Daniel Kramer … (1996)
We present an automatic method for docking organic ligands into protein binding sites. The method can be used in the design process of specific protein ligands. It combines an appropriate model of the physico-chemical properties of the docked molecules with efficient methods for sampling the conformational space of the ligand. If the ligand is flexible, it can adopt a large variety of different conformations. Each such minimum in conformational space presents a potential candidate for the conformation of the ligand in the complexed state. Our docking method samples the conformation space of the ligand on the basis of a discrete model and uses a tree-search technique for placing the ligand incrementally into the active site. For placing the first fragment of the ligand into the protein, we use hashing techniques adapted from computer vision. The incremental construction algorithm is based on a greedy strategy combined with efficient methods for overlap detection and for the search of new interactions. We present results on 19 complexes of which the binding geometry has been crystallographically determined. All considered ligands are docked in at most three minutes on a current workstation. The experimentally observed binding mode of the ligand is reproduced with 0.5 to 1.2 A rms deviation. It is almost always found among the highest-ranking conformations computed.

Q-SiteFinder: an energy-based method for the prediction of protein-ligand binding sites.

M. Jackson,  Alasdair Laurie (2005)
Identifying the location of ligand binding sites on a protein is of fundamental importance for a range of applications including molecular docking, de novo drug design and structural identification and comparison of functional sites. Here, we describe a new method of ligand binding site prediction called Q-SiteFinder. It uses the interaction energy between the protein and a simple van der Waals probe to locate energetically favourable binding sites. Energetically favourable probe sites are clustered according to their spatial proximity and clusters are then ranked according to the sum of interaction energies for sites within each cluster. There is at least one successful prediction in the top three predicted sites in 90% of proteins tested when using Q-SiteFinder. This success rate is higher than that of a commonly used pocket detection algorithm (Pocket-Finder) which uses geometric criteria. Additionally, Q-SiteFinder is twice as effective as Pocket-Finder in generating predicted sites that map accurately onto ligand coordinates. It also generates predicted sites with the lowest average volumes of the methods examined in this study. Unlike pocket detection, the volumes of the predicted sites appear to show relatively low dependence on protein volume and are similar in volume to the ligands they contain. Restricting the size of the pocket is important for reducing the search space required for docking and de novo drug design or site comparison. The method can be applied in structural genomics studies where protein binding sites remain uncharacterized since the 86% success rate for unbound proteins appears to be only slightly lower than that of ligand-bound proteins. Both Q-SiteFinder and Pocket-Finder have been made available online at http://www.bioinformatics.leeds.ac.uk/qsitefinder and http://www.bioinformatics.leeds.ac.uk/pocketfinder

This is an open access article licensed under the terms of the Creative Commons Attribution-Non-Commercial 4.0 International Public License (CC BY-NC 4.0) ( https://creativecommons.org/licenses/by-nc/4.0/legalcode), which permits unrestricted, non-commercial use, distribution and reproduction in any medium, provided the work is properly cited.