Chronic Obstructive Pulmonary Disease In Aboriginal Patients Of The Northern Territory Of Australia: A Landscape Perspective 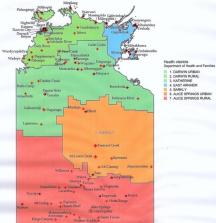 The Aboriginal population of Australia has a higher burden of chronic health conditions than non-Aboriginal Australians. However, there is a paucity of data on clinical and demographic characteristics of chronic obstructive pulmonary disease (COPD) in this population.

In this retrospective study we evaluated the clinical, demographic and environmental influences in adult Aboriginal patients with COPD living in the regional and remote communities of the Northern Territory of Australia.

There were 380 patients (49%) with a diagnosis of COPD of the 767 patients referred to specialist respiratory outreach clinics. The mean age was 57 years (56% were female) and mean±SD BMI was 24.30±7.01 kg/m 2. Smoking history was noted in 93% of the study cohort. The most common respiratory symptom was shortness of breath in 62%, and inhaled medications (salbutamol, tiotropium, salmeterol/fluticasone) were used by 79%, 44% and 58% of patients, respectively. Spirometry showed obstructive impairment (FEV 1/FVC <0.7) in 79% (0.56±0.17), with mean FEV 1 42% of predicted, and a bronchodilator response was present in 28.6%. Comorbid bronchiectasis was diagnosed in 49.8% along with COPD. The relationship between COPD and community demography showed a higher proportion of smokers and those with underlying bronchiectasis to have lower FEV 1/FVC ratios. Communities with a higher proportion of asthma were younger and had higher smoking rates. Mortality increased with increasing number of exacerbations and hospital admissions.

The Aboriginal population with COPD has a higher prevalence of smoking, moderate to severe airflow obstruction on spirometry and frequently co-diagnosed bronchiectasis with increased severity of ventilatory impairment.

The human dimension of fire regimes on Earth

David Bowman,  Jennifer Balch,  Paulo Artaxo … (2011)
Humans and their ancestors are unique in being a fire-making species, but ‘natural’ (i.e. independent of humans) fires have an ancient, geological history on Earth. Natural fires have influenced biological evolution and global biogeochemical cycles, making fire integral to the functioning of some biomes. Globally, debate rages about the impact on ecosystems of prehistoric human-set fires, with views ranging from catastrophic to negligible. Understanding of the diversity of human fire regimes on Earth in the past, present and future remains rudimentary. It remains uncertain how humans have caused a departure from ‘natural’ background levels that vary with climate change. Available evidence shows that modern humans can increase or decrease background levels of natural fire activity by clearing forests, promoting grazing, dispersing plants, altering ignition patterns and actively suppressing fires, thereby causing substantial ecosystem changes and loss of biodiversity. Some of these contemporary fire regimes cause substantial economic disruptions owing to the destruction of infrastructure, degradation of ecosystem services, loss of life, and smoke-related health effects. These episodic disasters help frame negative public attitudes towards landscape fires, despite the need for burning to sustain some ecosystems. Greenhouse gas-induced warming and changes in the hydrological cycle may increase the occurrence of large, severe fires, with potentially significant feedbacks to the Earth system. Improved understanding of human fire regimes demands: (1) better data on past and current human influences on fire regimes to enable global comparative analyses, (2) a greater understanding of different cultural traditions of landscape burning and their positive and negative social, economic and ecological effects, and (3) more realistic representations of anthropogenic fire in global vegetation and climate change models. We provide an historical framework to promote understanding of the development and diversification of fire regimes, covering the pre-human period, human domestication of fire, and the subsequent transition from subsistence agriculture to industrial economies. All of these phases still occur on Earth, providing opportunities for comparative research.

Burden of disease and injury in Aboriginal and Torres Strait Islander Peoples: the Indigenous health gap.

Theo Vos,  Peter B. Barker,  Dan Lopez-Paniagua … (2009)
Disparities in health status between Aboriginal and Torres Strait Islander peoples and the total Australian population have been documented in a fragmentary manner using disparate health outcome measures. We applied the burden of disease approach to national population health datasets and Indigenous-specific epidemiological studies. The main outcome measure is the Indigenous health gap, i.e. the difference between current rates of Disability-Adjusted Life Years (DALYs) by age, sex and cause for Indigenous Australians and DALY rates if the same level of mortality and disability as in the total Australian population had applied. The Indigenous health gap accounted for 59% of the total burden of disease for Indigenous Australians in 2003 indicating a very large potential for health gain. Non-communicable diseases explained 70% of the health gap. Tobacco (17%), high body mass (16%), physical inactivity (12%), high blood cholesterol (7%) and alcohol (4%) were the main risk factors contributing to the health gap. While the 26% of Indigenous Australians residing in remote areas experienced a disproportionate amount of the health gap (40%) compared with non-remote areas, the majority of the health gap affects residents of non-remote areas. Comprehensive information on the burden of disease for Indigenous Australians is essential for informed health priority setting. This assessment has identified large health gaps which translate into opportunities for large health gains. It provides the empirical base to determine a more equitable and efficient funding of Indigenous health in Australia. The methods are replicable and would benefit priority setting in other countries with great disparities in health experienced by Indigenous peoples or other disadvantaged population groups.

Dirkje S. Postma,  Klaus F Rabe (2015)
Although in textbooks asthma and chronic obstructive pulmonary disease (COPD) are viewed as distinct disorders, there is increasing awareness that many patients have features of both. This article reviews the asthma-COPD overlap syndrome.