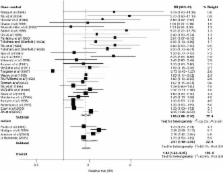 We performed a systematic review of 28 case–control, 17 cohort and seven twin studies of the relationship between family history and risk of lung cancer and a meta-analysis of risk estimates. Data from both case–control and cohort studies show a significantly increased lung cancer risk associated with having an affected relative. Risk appears to be greater in relatives of cases diagnosed at a young age and in those with multiple affected family members. Increased lung cancer risk was observed in association with an affected spouse and twin studies, while limited, favour shared environmental exposures. The limitations of the currently published epidemiological studies to infer genetic susceptibility are discussed.

D Easton,  D Goldgar,  Cheryl Albright … (1994)
Cancer has long been recognized to have a familial component. Elevated risks for cancers at the same site for relatives of cancer probands have been reported for both common cancers and a number of the rarer cancer sites. For a particular cancer site, however, the estimated risks to relatives have varied considerably depending on criteria for selection of probands, how cancers were determined in relatives, and overall study design. Not surprisingly, the estimated risks of other cancers in relatives of probands with cancer at a given site have been subject to even more variation. The aim of this study was to use the Utah Population Database resource to systematically study familial clustering of 28 distinct cancer site definitions among first-degree relatives (parents, siblings, and off-spring) of cancer probands. We estimated familial relative risks from the Utah Population Database by identifying all cases of cancer in these first-degree relatives. These observed values were compared with those expected based on cohort-specific internal rates calculated from 399,786 relatives of all individuals in the Utah Population Database known to have died in Utah. All sites showed an excess of cancers of the same site among relatives, with thyroid and colon cancers and lymphocytic leukemia showing the highest familial risks. When the analyses were restricted to cases with early ages at diagnosis, increased familial components for most cancer sites became evident. A significant difference in familial relative risk (FRR) between male (FRR = 4.04; 95% confidence interval [CI] = 3.13-5.07) and female (FRR = 2.24; 95% CI = 1.54-3.08) probands was found for colon cancer. Highly significant familial associations (one-sided; P < .001) were found among breast, colon, and prostate cancers and between breast and thyroid cancers. Statistically significant (one-sided, P < .01) associations were also found between tobacco-associated sites (lung, larynx, lip, and cervix). This study represents a unique comprehensive population-based study of familial cancer. The familial associations reported here will be useful in generating hypotheses about specific genetic and environmental factors that can be tested in genetic linkage and case-control studies.

Environmental and heritable causes of cancer among 9.6 million individuals in the Swedish Family-Cancer Database.

paul lichtenstein,  Kamila Czene,  Kari Hemminki (2002)
The genetic and environmental components in 15 common cancers were estimated using the nationwide Swedish Family-Cancer Database. Tetrachoric correlations were used to describe similarity in cancer liability among family members. Structural equation modeling was used to derive estimates of the importance of genetic and environmental effects. Statistically significant estimates of proportion of cancer susceptibility, accounted for by genetic effects, were obtained for all studied cancers except for leukemia. The estimate was highest in thyroid cancer (53%), followed by tumors at endocrine glands (28%), testis (25%), breast (25%), cervix (22%), melanoma (21%), colon (13%), nervous system (12%), rectum (12%), non-Hodgkin lymphoma (10%), lung (8%), kidney (8%), urinary bladder (7%), stomach (1%) and leukemia (1%). The estimates of shared environmental effects ranged from 0% (cervix) to 15% (stomach). The childhood shared environmental effects were most important in testicular cancer (17%), stomach cancer (13%) and cervix in situ (13%). Our results indicate that environment has a principal causative role in cancer at all studied sites except for thyroid. The relatively large effect of heritability in cancer at some sites, on the other hand, indicates that even though susceptibility genes have been described at many cancer sites, they are likely to explain only part of the genetic effects. Copyright 2002 Wiley-Liss, Inc.

Amy Levin,  Y. Gao,  Rong Zhang … (1987)
A case-control study involving interviews with 672 female lung cancer patients and 735 population-based controls was conducted to investigate the high rates of lung cancer, notably adenocarcinoma, among women in Shanghai. Cigarette smoking was a strong risk factor, but accounted for only about one-fourth of all newly diagnosed cases of lung cancer. Most patients, particularly with adenocarcinoma, were life-long non-smokers. The risks of lung cancer were higher among women reporting tuberculosis and other pre-existing lung diseases. Hormonal factors were suggested by an increased risk associated with late menopause and by a gradient in the risk of adenocarcinoma with decreasing menstrual cycle length, with a 3-fold excess among women who had shorter cycles. Perhaps most intriguing were associations found between lung cancer and measures of exposure to cooking oil vapors. Risks increased with the numbers of meals cooked by either stir frying, deep frying or boiling; with the frequency of smokiness during cooking; and with the frequency of eye irritation during cooking. Use of rapeseed oil, whose volatiles following high-temperature cooking may be mutagenic, was also reported more often by the cancer patients. The findings thus confirm that factors other than smoking are responsible for the high risk of lung cancer among Chinese women and provide clues for further research, including the assessment of cooking practices.