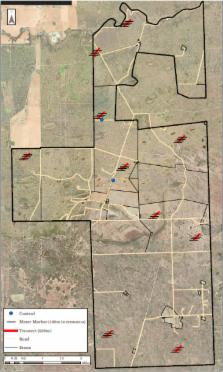 Cattle fever ticks (CFT), vectors of bovine babesiosis and anaplasmosis, were eradicated from the United States by 1943, but are frequently reintroduced from neighboring border states of Mexico via stray cattle and wildlife hosts including white-tailed deer ( Odocoileus virginianus) (WTD) and nilgai antelope ( Boselaphus tragocamelus). Nilgai antelope are exotic bovids from India that are hosts of CFT, have large home ranges as compared to WTD, thus have the potential to spread CFT through the landscape. Currently, there are no methods to control CFT on nilgai. Odor lures were evaluated to determine if nilgai could be attracted to a central point for development of control methods. Four treatments, nilgai offal a natural odor lure was used as the positive control; and compared to three artificial odors; screw worm lure, volatile fatty acids, citronella oil. Studies were conducted on a free-ranging population of nilgai at the East Foundation's Santa Rosa Ranch (Kenedy Co., near Riviera, Texas, USA). Game cameras were used to document visitation to the lures. In the ten randomly placed transects, 110 nilgai and 104 WTD were photographed. Offal had significantly more visits by nilgai (71% of total visits) than screwworm (15%), VFA (11%), and citronella (4%). For WTD, there was no significant difference in visitation at the lure treatments.

Attract Nilgai &Treat TicksNilgai are attracted to offal. These gathering points may allow for treatment of nilgai with biological controls such as Metarhizium/Beaveria fungus or entomopathogenic nematodes. Methods for treatment are under development and need to be compatible for use in wildlife refuges and South Texas rangelands. Treatment of cattle fever ticks on nilgai will help mitigate the impact of this exotic mammal species in the pathogenic landscape and safeguard livestock production.

John Giles,  A. Townsend Peterson,  Joseph Busch … (2014)
Abstract' Background For >100 years cattle production in the southern United States has been threatened by cattle fever. It is caused by an invasive parasite-vector complex that includes the protozoan hemoparasites Babesia bovis and B. bigemina, which are transmitted among domestic cattle via Rhipicephalus tick vectors of the subgenus Boophilus. In 1906 an eradication effort was started and by 1943 Boophilus ticks had been confined to a narrow tick eradication quarantine area (TEQA) along the Texas-Mexico border. However, a dramatic increase in tick infestations in areas outside the TEQA over the last decade suggests these tick vectors may be poised to re-invade the southern United States. We investigated historical and potential future distributions of climatic habitats of cattle fever ticks to assess the potential for a range expansion. Methods We built robust spatial predictions of habitat suitability for the vector species Rhipicephalus (Boophilus) microplus and R. (B.) annulatus across the southern United States for three time periods: 1906, present day (2012), and 2050. We used analysis of molecular variance (AMOVA) to identify persistent tick occurrences and analysis of bias in the climate proximate to these occurrences to identify key environmental parameters associated with the ecology of both species. We then used ecological niche modeling algorithms GARP and Maxent to construct models that related known occurrences of ticks in the TEQA during 2001–2011 with geospatial data layers that summarized important climate parameters at all three time periods. Results We identified persistent tick infestations and specific climate parameters that appear to be drivers of ecological niches of the two tick species. Spatial models projected onto climate data representative of climate in 1906 reproduced historical pre-eradication tick distributions. Present-day predictions, although constrained to areas near the TEQA, extrapolated well onto climate projections for 2050. Conclusions Our models indicate the potential for range expansion of climate suitable for survival of R. microplus and R. annulatus in the southern United States by mid-century, which increases the risk of reintroduction of these ticks and cattle tick fever into major cattle producing areas.

Maria Esteve Gassent,  Adalberto Perez de Leon,  Dora Romero-Salas … (2014)
Transboundary zoonotic diseases, several of which are vector borne, can maintain a dynamic focus and have pathogens circulating in geographic regions encircling multiple geopolitical boundaries. Global change is intensifying transboundary problems, including the spatial variation of the risk and incidence of zoonotic diseases. The complexity of these challenges can be greater in areas where rivers delineate international boundaries and encompass transitions between ecozones. The Rio Grande serves as a natural border between the US State of Texas and the Mexican States of Chihuahua, Coahuila, Nuevo León, and Tamaulipas. Not only do millions of people live in this transboundary region, but also a substantial amount of goods and people pass through it everyday. Moreover, it occurs over a region that functions as a corridor for animal migrations, and thus links the Neotropic and Nearctic biogeographic zones, with the latter being a known foci of zoonotic diseases. However, the pathogenic landscape of important zoonotic diseases in the south Texas–Mexico transboundary region remains to be fully understood. An international perspective on the interplay between disease systems, ecosystem processes, land use, and human behaviors is applied here to analyze landscape and spatial features of Venezuelan equine encephalitis, Hantavirus disease, Lyme Borreliosis, Leptospirosis, Bartonellosis, Chagas disease, human Babesiosis, and Leishmaniasis. Surveillance systems following the One Health approach with a regional perspective will help identifying opportunities to mitigate the health burden of those diseases on human and animal populations. It is proposed that the Mexico–US border along the Rio Grande region be viewed as a continuum landscape where zoonotic pathogens circulate regardless of national borders.