A history of study and new records of terrestrial enchytraeids (Annelida, Clitellata, Enchytraeidae) from the Russian Far East 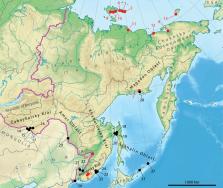 A list of terrestrial enchytraeids of the Russian Far East is compiled based on literature and extensive field data collected by the authors in 2019. A database has been created consisting of geographic coordinates, habitat type, species, and data source. For some species collected by the authors, barcoding using COI, 16s, and 12s rRNA genes has been performed. In total, there are at least 62 species of enchytraeids belonging to 12 genera. Seven species ( Achaeta macroampullacea , Cognettia sphagnetorum , Enchytraeus dichaetus , Fridericia cusanica , Globulidrilus riparius , Marionina southerni , Mesenchytraeus gigachaetus ) are reported in the Russian Far East for the first time. Cognettia sphagnetorum and F. cusanica are most probably introduced. Taxonomic and biogeographical remarks on some of the species found and differences from the original descriptions are provided. Some of the specimens may be undescribed species, but this requires a more in-depth examination. The Russian Far East, especially its southeastern part, is of great interest as a possible location for new species of enchytraeids.

Molecular phylogeny of naidid worms (Annelida: Clitellata) based on cytochrome oxidase I

The use of earthworms in ecological soil classification and assessment concepts.

J Römbke,  Stephan Jänsch,  W Didden (2005)
Without doubt, earthworms are the most important soil invertebrates in most soils worldwide, in terms of both biomass and activity. Several species are even considered to be ecosystem engineers. Earthworms are also known to influence soil structure, soil chemistry, and, in particular, processes like organic matter decomposition. In addition, standardized sampling methods are available and their taxonomy is well known (even the first PC-aided keys have been developed). For these reasons, earthworms were recognized as a part of ecological classification and assessment schemes early on. However, due to the relatively small number at many sites, they have to be part of a battery approach. By use of examples from The Netherlands (biological indicator of soil quality) and Germany (soil biological site classification), the practicability of the use of earthworms is demonstrated in determining the influence of different anthropogenic land use forms. In these cases, the structure of the earthworm community, as well as their abundance and biomass, were used as endpoints.