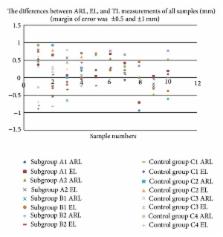 The effects of three dissolving agents on the accuracy of an electronic apex locator- (EAL-) integrated endodontic handpiece during retreatment procedures were evaluated. The true lengths (TLs) of 56 extracted incisor teeth were determined visually. Twenty teeth were filled with gutta-percha and a resin-based sealer (group A), 20 with gutta-percha and a zinc oxide/eugenol-based sealer (group B), and 16 roots were used as the control group (group C). All roots were prepared to TL. Guttasolv, Resosolv, and Endosolv E were used as the dissolving solutions. Two evaluations of the handpiece were performed: the apical accuracy during the auto reverse function (ARL) and the apex locator function (EL) alone. The ARL function of the handpiece gave acceptable results. There were significant differences between the EL mode measurements and the TL ( P < 0.05). In these comparisons, Tri Auto ZX EL mode measurements were significantly shorter than those of the TL.

D Ricucci,  K Langeland (1998)
The results of an in vivo histological study involving apical and periapical tissues following root canal therapy after different observation periods demonstrated the most favourable histological conditions when the instrumentation and obturation remained at or short of the apical constriction. This was the case in the presence of vital or necrotic pulps, also when bacteria had penetrated the foramen and were present in the periapical tissues. When the sealer and/or the gutta-percha was extruded into the periapical tissue, the lateral canals and the apical ramifications, there was always a severe inflammatory reaction including a foreign body reaction despite a clinical absence of pain.

Outcomes of nonsurgical retreatment and endodontic surgery: a systematic review.

Ben J. Hayes,  Paul Dummer,  M. Ghandi … (2006)
It is generally accepted that root canal treatment procedures should be confined within the root canal system. To achieve this objective the canal terminus must be detected accurately during canal preparation and precise control of working length during the process must be maintained. Several techniques have been used for determining the apical canal terminus including electronic methods. However, the fundamental electronic operating principles and classification of the electronic devices used in this method are often unknown and a matter of controversy. The basic assumption with all electronic length measuring devices is that human tissues have certain characteristics that can be modelled by a combination of electrical components. Therefore, by measuring the electrical properties of the model, such as resistance and impedance, it should be possible to detect the canal terminus. The root canal system is surrounded by dentine and cementum that are insulators to electrical current. At the minor apical foramen, however, there is a small hole in which conductive materials within the canal space (tissue, fluid) are electrically connected to the periodontal ligament that is itself a conductor of electric current. Thus, dentine, along with tissue and fluid inside the canal, forms a resistor, the value of which depends on their dimensions, and their inherent resistivity. When an endodontic file penetrates inside the canal and approaches the minor apical foramen, the resistance between the endodontic file and the foramen decreases, because the effective length of the resistive material (dentine, tissue, fluid) decreases. As well as resistive properties, the structure of the tooth root has capacitive characteristics. Therefore, various electronic methods have been developed that use a variety of other principles to detect the canal terminus. Whilst the simplest devices measure resistance, other devices measure impedance using either high frequency, two frequencies, or multiple frequencies. In addition, some systems use low frequency oscillation and/or a voltage gradient method to detect the canal terminus. The aim of this review was to clarify the fundamental operating principles of the different types of electronic systems that claim to measure canal length.