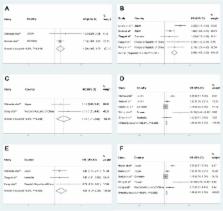 Recent studies have shown that C-reactive protein (CRP) is a useful predictive factor in several cancers; however, its role in esophageal cancer (EC) is controversial.

A total of eight studies involving 1,471 patients were included in our study. Our pooled results demonstrated that a high level of serum CRP was associated with poor OS (hazard ratio [HR]: 1.40, 95% confidence interval [CI]: 1.25–1.57, I 2=81.3%, P<0.0001). Subgroup analyses were performed in further investigations. When the patients were segregated according to treatment, pathological type, and cut-off level, high levels of serum CRP were found to be significantly correlated with OS.

Our meta-analysis revealed that high levels of serum CRP were significantly associated with poor OS in patients with EC.

The impact of preoperative serum C-reactive protein on the prognosis of patients with hepatocellular carcinoma.

Terutoshi Yamaoka,  M Hamatake,  Y Iwatani … (2005)
The authors evaluated the significance of the preoperative serum C-reactive protein (CRP) level as a prognostic indicator in patients with hepatocellular carcinoma (HCC). One hundred forty-one patients who underwent curative resection for HCC were reviewed retrospectively. Clinicopathologic variables were compared between patients with serum CRP levels >/= 1.0 mg/dL (n = 22 patients; the CRP-positive group) and patients with serum CRP levels < 1.0 mg/dL (n = 119 patients; the CRP-negative group). Univariate and multivariate analyses were conducted to identify factors that affected survival and disease recurrence. There was a significant correlation between the preoperative serum CRP level and tumor size. Invasion to the portal vein in the CRP-positive group was significantly more frequent than that in the CRP-negative group. Even after they underwent curative resection, 75.3% of patients in the CRP-positive group experienced recurrence within 1 year. The overall survival and recurrence-free survival rates in the CRP-positive group were significantly lower compared with the rates in the CRP-negative group. On multivariate analysis, the preoperative serum CRP level was selected as one of the unfavorable indicators regarding survival and recurrence. When CRP levels, albumin levels, and platelet counts that were available before surgery were scored as a combined index, the total score demonstrated a good stratification value for survival after hepatic resection. The current results showed that the preoperative serum CRP level is an independent and significant indicator predictive of poor prognosis and early recurrence in patients with HCC. The new CRP-based scoring system offers reliable information for predicting survival. (c) 2005 American Cancer Society.

The number of lymph nodes removed predicts survival in esophageal cancer: an international study on the impact of extent of surgical resection.

Simon Law,  Arnulf Hölscher,  Alberto Ruol … (2008)
Surveillance, Epidemiology and End Results (SEER) data indicate that number of lymph nodes removed impacts survival in gastric cancer. Our aim was to study this relationship in esophageal cancer. The study population included 2303 esophageal cancer patients (1381 adenocarcinoma, 922 squamous) from 9 international centers that had R0 esophagectomy prior to 2002 and were followed at regular intervals for 5 years or until death. Patients treated with neoadjuvant or adjuvant therapy were excluded. Operations consisted of esophagectomy with (1700) and without (603) thoracotomy. Median number of nodes removed was 17 (IQR10-29). There were 508 patients with stage I, 853 stage II, and 942 stage III. Five-year survival was 40%. Cox regression analysis showed that the number of lymph nodes removed was an independent predictor of survival (P < 0.0001). The optimal threshold predicted by Cox regression for this survival benefit was removal of a minimum of 23 nodes. Other independent predictors of survival were the number of involved nodes, depth of invasion, presence of nodal metastasis, and cell type. The number of lymph nodes removed is an independent predictor of survival after esophagectomy for cancer. To maximize this survival benefit a minimum of 23 regional lymph nodes must be removed.

The full terms of the License are available at http://creativecommons.org/licenses/by-nc/3.0/Non-commercial uses of the work are permitted without any further permission from Dove Medical Press Limited, provided the work is properly attributed.