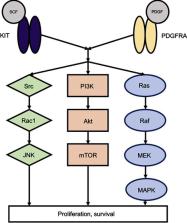 Gastrointestinal stromal tumors (GISTs) are the most common mesenchymal neoplasms of the gastrointestinal tract. Since the discovery that the KIT and PDGFRA receptor tyrosine kinases are the primary oncogenic drivers in the vast majority of GISTs, targeted therapy with tyrosine kinase inhibitors has been the mainstay of treatment for this disease. Using molecular profiling of tumor specimens, researchers also discovered that KIT and PDGFRA mutations are non-random and occur in specific regions of the receptors, and furthermore, that particular genotypes predicted response or resistance to targeted therapy. Imatinib, the first tyrosine kinase inhibitor used to treat GIST, remains the first-line therapy in advanced GIST and the only therapy confirmed through clinical trials in the adjuvant or neoadjuvant setting for resectable disease. Resistance to imatinib is well described and is either primary or secondary. Primary resistance is associated with specific tumor genotypes, so genotyping of individual patient tumors helps guide decision-making into whether to offer imatinib and at what dose. Secondary resistance occurs due to the acquisition of secondary mutations during therapy. Currently, the main strategy to combat imatinib resistance is to switch to another tyrosine kinase inhibitor, because imatinib-resistant GIST is usually still oncogenically addicted to KIT/PDGFRA signaling. Surgery can also be used to combat resistant disease in select settings. Unfortunately, progression-free and overall survival remains dismal for patients who develop imatinib-resistant disease, and further research into alternative strategies is still needed.

Jaap Verweij,  Paolo Casali,  John Zalcberg … (2015)
Imatinib is approved worldwide for use in gastrointestinal stromal tumours (GIST). We aimed to assess dose dependency of response and progression-free survival with imatinib for metastatic GIST. 946 patients were randomly allocated imatinib 400 mg either once or twice a day. Those assigned the once a day regimen who had progression were offered the option of crossover. The primary endpoint was progression-free survival. Analysis was by intention to treat. At median follow-up of 760 days (IQR 644-859), 263 (56%) of 473 patients allocated imatinib once a day had progressed compared with 235 (50%) of 473 who were assigned treatment twice a day (estimated hazard ratio 0.82 [95% CI 0.69-0.98]; p=0.026). Side-effects arose in 465/470 (99%) patients allocated the once daily regimen compared with 468/472 (99%) assigned treatment twice a day. By comparison with the group treated once a day, more dose reductions (77 [16%] vs 282 [60%]) and treatment interruptions (189 [40%] vs 302 [64%]) were recorded in patients allocated the twice daily regimen, but treatment in both arms was fairly well tolerated. 52 (5%) patients achieved a complete response, 442 (47%) a partial response, and 300 (32%) stable disease, with no difference between groups. Median time to best response was 107 days (IQR 58-172). If response induction is the only aim of treatment, a daily dose of 400 mg of imatinib is sufficient; however, a dose of 400 mg twice a day achieves significantly longer progression-free survival.

Ronald DeMatteo,  Karla V. Ballman,  Cristina R Antonescu … (2009)
Gastrointestinal stromal tumour is the most common sarcoma of the intestinal tract. Imatinib mesylate is a small molecule that inhibits activation of the KIT and platelet-derived growth factor receptor alpha proteins, and is effective in first-line treatment of metastatic gastrointestinal stromal tumour. We postulated that adjuvant treatment with imatinib would improve recurrence-free survival compared with placebo after resection of localised, primary gastrointestinal stromal tumour. We undertook a randomised phase III, double-blind, placebo-controlled, multicentre trial. Eligible patients had complete gross resection of a primary gastrointestinal stromal tumour at least 3 cm in size and positive for the KIT protein by immunohistochemistry. Patients were randomly assigned, by a stratified biased coin design, to imatinib 400 mg (n=359) or to placebo (n=354) daily for 1 year after surgical resection. Patients and investigators were blinded to the treatment group. Patients assigned to placebo were eligible to crossover to imatinib treatment in the event of tumour recurrence. The primary endpoint was recurrence-free survival, and analysis was by intention to treat. Accrual was stopped early because the trial results crossed the interim analysis efficacy boundary for recurrence-free survival. This study is registered with ClinicalTrials.gov, number NCT00041197. All randomised patients were included in the analysis. At median follow-up of 19.7 months (minimum-maximum 0-56.4), 30 (8%) patients in the imatinib group and 70 (20%) in the placebo group had had tumour recurrence or had died. Imatinib significantly improved recurrence-free survival compared with placebo (98% [95% CI 96-100] vs 83% [78-88] at 1 year; hazard ratio [HR] 0.35 [0.22-0.53]; one-sided p<0.0001). Adjuvant imatinib was well tolerated, with the most common serious events being dermatitis (11 [3%] vs 0), abdominal pain (12 [3%] vs six [1%]), and diarrhoea (ten [2%] vs five [1%]) in the imatinib group and hyperglycaemia (two [<1%] vs seven [2%]) in the placebo group. Adjuvant imatinib therapy is safe and seems to improve recurrence-free survival compared with placebo after the resection of primary gastrointestinal stromal tumour. US National Institutes of Health and Novartis Pharmaceuticals.