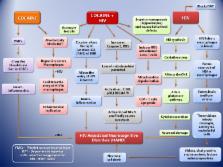 Substantial epidemiological studies suggest that not only, being one of the reasons for the transmission of the human immunodeficiency virus (HIV), but drug abuse also serves its role in determining the disease progression and severity among the HIV infected population. This article focuses on the drug cocaine, and its role in facilitating entry of HIV into the CNS and mechanisms of development of neurologic complications in infected individuals. Cocaine is a powerfully addictive central nervous system stimulating drug, which increases the level of neurotransmitter dopamine (DA) in the brain, by blocking the dopamine transporters (DAT) which is critical for DA homeostasis and neurocognitive function. Tat protein of HIV acts as an allosteric modulator of DAT, where as cocaine acts as reuptake inhibitor. When macrophages in the CNS are exposed to DA, their number increases. These macrophages release inflammatory mediators and neurotoxins, causing chronic neuroinflammation. Cocaine abuse during HIV infection enhances the production of platelet monocyte complexes (PMCs), which may cross transendothelial barrier, and result in HIV-associated neurocognitive disorder (HAND). HAND is characterized by neuroinflammation, including astrogliosis, multinucleated giant cells, and neuronal apoptosis that is linked to progressive virus infection and immune deterioration. Cocaine and viral proteins are capable of eliciting signaling transduction pathways in neurons, involving in mitochondrial membrane potential loss, oxidative stress, activation of JNK, p38, and ERK/MAPK pathways, and results in downstream activation of NF-κB that leads to HAND. Tat-induced inflammation provokes permeability of the blood brain barrier (BBB) in the platelet dependent manner, which can potentially be the reason for progression to HAND during HIV infection. A better understanding on the role of cocaine in HIV infection can give a clue in developing novel therapeutic strategies against HIV-1 infection in cocaine using HIV infected population.

Cocaine use and HIV infection in intravenous drug users in San Francisco.

Christine Chaisson,  L M Sande,  D G Osmond … (1989)
We assessed risk factors for human immunodeficiency virus (HIV) infection in 633 heterosexual intravenous drug users. The HIV seroprevalence was 26% in blacks, 10% in Hispanics, and 6% in whites. Intravenous cocaine use significantly increased the risk of HIV infection, with a seroprevalence of 35% in daily cocaine users (odds ratio, 6.4; 95% confidence interval, 3.0 to 13.3). Black subjects were more likely to use cocaine regularly. Drug use in shooting galleries and sharing of drug injection equipment were also associated with HIV infection and were more common in cocaine users. By multivariate analysis, black race, daily cocaine injection by blacks and Hispanics, all other cocaine injection, heavy use prior to entry into methadone treatment by blacks, and use of drugs in shooting galleries were independent predictors of HIV infection. Methadone therapy was associated with substantial reductions in heroin use and some reduction in cocaine use, but 24% of cocaine users receiving methadone began or increased cocaine injection after entry into treatment.

Jayanta Bhattacharya,  Stephen Peters,  Jeanne Bell … (2004)
Complete envelope genes were amplified from autopsy brain tissue of five individuals who had died of AIDS and had neurological complications. Lymph node samples were included for two of the patients. Nineteen different envelope clones from the five patients had distinct V1V2 sequences. Thirteen of the envelopes were functional and conferred fusigenicity and infectivity for CD4(+) CCR5(+) cells. Infectivity and cell-cell fusion assays showed that most envelopes used both CCR5 and CCR3. One brain-derived envelope used a broad range of coreceptors, while three other brain envelopes from one individual were restricted to CCR5. However, there was no correlation between tissue of origin and coreceptor use. Envelopes showed two very distinct phenotypes depending on their capacity to infect macrophages and to exploit low levels of CD4 and/or CCR5 for infection. Envelopes that were highly fusigenic and tropic for macrophages were identified in brain tissue from four of the five patients. The enhanced macrophage tropism correlated with reduced sensitivity to inhibition by Q4120, a CD4-specific antibody, but not with sensitivity to the CCR5 inhibitor, TAK779. The highly macrophage-tropic envelopes were able to infect cells expressing low levels of CD4 and/or CCR5. Comparison with several well-characterized macrophage-tropic envelopes showed that the four identified patient envelopes were at the top limit of macrophage tropism. In contrast, all four lymph node-derived envelopes exhibited a non-macrophage-tropic phenotype and required high levels of CD4 for infection. Our data support the presence of envelopes that are highly fusigenic and tropic for macrophages in the brains of patients with neurological complications. These envelopes are able to infect cells that express low levels of CD4 and/or CCR5 and may have adapted for replication in brain macrophages and microglia, which are known to express limited amounts of CD4.

Sharanya M. Kousik,  T. Celeste Napier,  Paul M. Carvey (2012)
The blood brain barrier (BBB) is a highly dynamic interface between the central nervous system (CNS) and periphery. The BBB is comprised of a number of components and is part of the larger neuro(glio)vascular unit. Current literature suggests that psychostimulant drugs of abuse alter the function of the BBB which likely contributes to the neurotoxicities associated with these drugs. In both preclinical and clinical studies, psychostimulants including methamphetamine, MDMA, cocaine, and nicotine, produce BBB dysfunction through alterations in tight junction protein expression and conformation, increased glial activation, increased enzyme activation related to BBB cytoskeleton remodeling, and induction of neuroinflammatory pathways. These detrimental changes lead to increased permeability of the BBB and subsequent vulnerability of the brain to peripheral toxins. In fact, abuse of these psychostimulants, notably methamphetamine and cocaine, has been shown to increase the invasion of peripheral bacteria and viruses into the brain. Much work in this field has focused on the co-morbidity of psychostimulant abuse and human immunodeficiency virus (HIV) infection. As psychostimulants alter BBB permeability, it is likely that this BBB dysfunction results in increased penetration of the HIV virus into the brain thus increasing the risk of and severity of neuro AIDS. This review will provide an overview of the specific changes in components within the BBB associated with psychostimulant abuse as well as the implications of these changes in exacerbating the neuropathology associated with psychostimulant drugs and HIV co-morbidity.

This article was submitted to Virology, a section of the journal Frontiers in Microbiology.