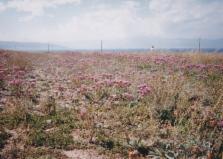 Central Asia is one of the important centers of bee diversity in the Palearctic Region. However, there is insufficient information for many taxa in the central Asian bee fauna. The Kyushu and Shimane Universities (Japan) Expeditions to Kazakhstan, Kyrgyzstan, Uzbekistan, and Xinjiang Uyghur of China were conducted in the years 2000 to 2004 and 2012 to 2014.

Biogeography of the Bees

Suzanne H Richards,  Bryan N. Danforth,  Hans P. Schwarz (2006)
Until the 1980s theories of social insect evolution drew strongly on halictine and allodapine bees. However, that early work suffered from a lack of sound phylogenetic inference and detailed information on social behavior in many critical taxa. Recent studies have changed our understanding of these bee groups in profound ways. It has become apparent that forms of social organization, caste determination, and sex allocation are more labile and complex than previously thought, although the terminologies for describing them are still inadequate. Furthermore, the unexpected complexity means that many key parameters in kin selection and reproductive skew models remain unquantified, and addressing this lack of information will be formidable. At the same time, phylogenetic questions have become more tractable, and DNA sequence-based studies have resolved questions that earlier studies could not resolve, radically changing our understanding of the number of origins and losses of sociality in these bees.

Gareth Pearson,  Seán Brady,  Sedonia Sipes … (2004)
We analyzed the higher level phylogeny of the bee family Halictidae based on the coding regions of three single-copy nuclear genes (long-wavelength [LW] opsin, wingless, and elongation factor 1-alpha [EF-1 alpha]). Our combined data set consisted of 2,234 aligned nucleotide sites (702 base pairs [bp] for LW opsin, 405 bp for wingless, and 1,127 bp for EF-1 alpha) and 779 parsimony-informative sites. We included 58 species of halictid bees from 33 genera, representing all subfamilies and tribes, and rooted the trees using seven outgroups from other bee families: Colletidae, Andrenidae, Melittidae, and Apidae. We analyzed the separate and combined data sets by a variety of methods, including equal weights parsimony, maximum likelihood, and Bayesian methods. Analysis of the combined data set produced a strong phylogenetic signal with high bootstrap and Bremer support and high posterior probability well into the base of the tree. The phylogeny recovered the monophyly of the Halictidae and of all four subfamilies and both tribes, recovered relationships among the subfamilies and tribes congruent with morphology, and provided robust support for the relationships among the numerous genera in the tribe Halictini, sensu Michener (2000). Using our combined nucleotide data set, several recently described halictid fossils from the Oligocene and Eocene, and recently developed Bayesian methods, we estimated the antiquity of major clades within the family. Our results indicate that each of the four subfamilies arose well before the Cretaceous-Tertiary boundary and suggest that the early radiation of halictid bees involved substantial African-South American interchange roughly coincident with the separation of these two continents in the late Cretaceous. This combination of single-copy nuclear genes is capable of recovering Cretaceous-age divergences in bees with high levels of support. We propose that LW opsin, wingless, and EF-1 alpha(F2 copy) may be useful in resolving relationships among bee families and other Cretaceous-age insect lineages.