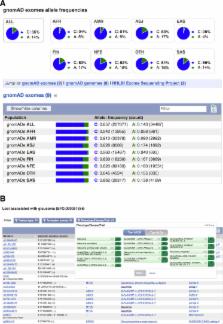 The Ensembl project has been aggregating, processing, integrating and redistributing genomic datasets since the initial releases of the draft human genome, with the aim of accelerating genomics research through rapid open distribution of public data. Large amounts of raw data are thus transformed into knowledge, which is made available via a multitude of channels, in particular our browser ( http://www.ensembl.org). Over time, we have expanded in multiple directions. First, our resources describe multiple fields of genomics, in particular gene annotation, comparative genomics, genetics and epigenomics. Second, we cover a growing number of genome assemblies; Ensembl Release 90 contains exactly 100. Third, our databases feed simultaneously into an array of services designed around different use cases, ranging from quick browsing to genome-wide bioinformatic analysis. We present here the latest developments of the Ensembl project, with a focus on managing an increasing number of assemblies, supporting efforts in genome interpretation and improving our browser.

Ensembl BioMarts: a hub for data retrieval across taxonomic space

Kim D. Pruitt, Jennifer Harrow, Rachel A. Harte … (2009)
Effective use of the human and mouse genomes requires reliable identification of genes and their products. Although multiple public resources provide annotation, different methods are used that can result in similar but not identical representation of genes, transcripts, and proteins. The collaborative consensus coding sequence (CCDS) project tracks identical protein annotations on the reference mouse and human genomes with a stable identifier (CCDS ID), and ensures that they are consistently represented on the NCBI, Ensembl, and UCSC Genome Browsers. Importantly, the project coordinates on manually reviewing inconsistent protein annotations between sites, as well as annotations for which new evidence suggests a revision is needed, to progressively converge on a complete protein-coding set for the human and mouse reference genomes, while maintaining a high standard of reliability and biological accuracy. To date, the project has identified 20,159 human and 17,707 mouse consensus coding regions from 17,052 human and 16,893 mouse genes. Three evaluation methods indicate that the entries in the CCDS set are highly likely to represent real proteins, more so than annotations from contributing groups not included in CCDS. The CCDS database thus centralizes the function of identifying well-supported, identically-annotated, protein-coding regions.

Javier Herrero, Matthieu Muffato, Kathryn Beal … (2016)
Evolution provides the unifying framework with which to understand biology. The coherent investigation of genic and genomic data often requires comparative genomics analyses based on whole-genome alignments, sets of homologous genes and other relevant datasets in order to evaluate and answer evolutionary-related questions. However, the complexity and computational requirements of producing such data are substantial: this has led to only a small number of reference resources that are used for most comparative analyses. The Ensembl comparative genomics resources are one such reference set that facilitates comprehensive and reproducible analysis of chordate genome data. Ensembl computes pairwise and multiple whole-genome alignments from which large-scale synteny, per-base conservation scores and constrained elements are obtained. Gene alignments are used to define Ensembl Protein Families, GeneTrees and homologies for both protein-coding and non-coding RNA genes. These resources are updated frequently and have a consistent informatics infrastructure and data presentation across all supported species. Specialized web-based visualizations are also available including synteny displays, collapsible gene tree plots, a gene family locator and different alignment views. The Ensembl comparative genomics infrastructure is extensively reused for the analysis of non-vertebrate species by other projects including Ensembl Genomes and Gramene and much of the information here is relevant to these projects. The consistency of the annotation across species and the focus on vertebrates makes Ensembl an ideal system to perform and support vertebrate comparative genomic analyses. We use robust software and pipelines to produce reference comparative data and make it freely available. Database URL: http://www.ensembl.org.