Characteristics of admissions and variations in the use of basic investigations, treatments and outcomes in Kenyan hospitals within a new Clinical Information Network 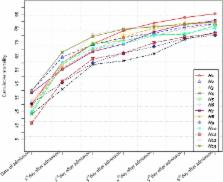 Lack of detailed information about hospital activities, processes and outcomes hampers planning, performance monitoring and improvement in low-income countries (LIC). Clinical networks offer one means to advance methods for data collection and use, informing wider health system development in time, but are rare in LIC. We report baseline data from a new Clinical Information Network (CIN) in Kenya seeking to promote data-informed improvement and learning.

Data from 13 hospitals engaged in the Kenyan CIN between April 2014 and March 2015 were captured from medical and laboratory records. We use these data to characterise clinical care and outcomes of hospital admission.

Data were available for a total of 30 042 children aged between 2 months and 15 years. Malaria (in five hospitals), pneumonia and diarrhoea/dehydration (all hospitals) accounted for the majority of diagnoses and comorbidity was found in 17 710 (59%) patients. Overall, 1808 deaths (6%) occurred (range per hospital 2.5%–11.1%) with 1037 deaths (57.4%) occurring by day 2 of admission (range 41%–67.8%). While malaria investigations are commonly done, clinical health workers rarely investigate for other possible causes of fever, test for blood glucose in severe illness or ascertain HIV status of admissions. Adherence to clinical guideline-recommended treatment for malaria, pneumonia, meningitis and acute severe malnutrition varied widely across hospitals.

Developing clinical networks is feasible with appropriate support. Early data demonstrate that hospital mortality remains high in Kenya, that resources to investigate severe illness are limited, that care provided and outcomes vary widely and that adoption of effective interventions remains slow. Findings suggest considerable scope for improving care within and across sites.

Supporting the delivery of cost-effective interventions in primary health-care systems in low-income and middle-income countries: an overview of systematic reviews.

Mickey Chopra,  Charles S Wiysonge,  Gabriel Rada … (2008)
Strengthening health systems is a key challenge to improving the delivery of cost-effective interventions in primary health care and achieving the vision of the Alma-Ata Declaration. Effective governance, financial and delivery arrangements within health systems, and effective implementation strategies are needed urgently in low-income and middle-income countries. This overview summarises the evidence from systematic reviews of health systems arrangements and implementation strategies, with a particular focus on evidence relevant to primary health care in such settings. Although evidence is sparse, there are several promising health systems arrangements and implementation strategies for strengthening primary health care. However, their introduction must be accompanied by rigorous evaluations. The evidence base needs urgently to be strengthened, synthesised, and taken into account in policy and practice, particularly for the benefit of those who have been excluded from the health care advances of recent decades.

Blood transfusion for severe anaemia in children in a Kenyan hospital.

Mike English,  Clement Ngando,  Amanda Ross … (2002)
Severe anaemia often secondary to malaria is a major contributor to child mortality in sub-Saharan Africa. We have confirmed that use of simple clinical and laboratory criteria can identify those children likely to benefit most from treatment. We have also shown that the speed of response may be critical. The quality and capacity of blood transfusion services could therefore have a major, direct effect on inpatient child mortality.