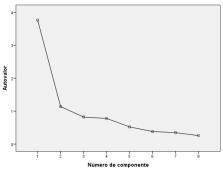 Telemedicine is both effective and able to provide efficient care at a lower cost. It also enjoys a high degree of acceptance among users. The Technology Acceptance Model proposed is based on the two main concepts of ease of use and perceived usefulness and is comprised of three dimensions: the individual context, the technological context and the implementation or organizational context. At present, no short, validated questionnaire exists in Catalonia to evaluate the acceptance of telemedicine services amongst healthcare professionals using a technology acceptance model. This article aims to statistically validate the Catalan version of the EU project Health Optimum telemedicine acceptance questionnaire. The study included the following phases: adaptation and translation of the questionnaire into Catalan and psychometric validation with construct (exploratory factor analysis), consistency (Cronbach’s alpha) and stability (test–retest) analysis. After deleting incomplete responses, calculations were made using 33 participants. The internal consistency measured with the Cronbach’s alpha coefficient was good with an alpha coefficient of 0.84 (95%, CI: 0.79–0.84). The intraclass correlation coefficient was 0.93 (95% CI: 0.852–0.964). The Kaiser–Meyer–Olkin test of sampling showed to be adequate (KMO = 0.818) and the Bartlett test of sphericity was significant (Chi-square 424.188; gl = 28; p < 0.001). The questionnaire had two dimensions which accounted for 61.2% of the total variance: quality and technical difficulties relating to telemedicine. The findings of this study suggest that the validated questionnaire has robust statistical features that make it a good predictive model of healthcare professional’s satisfaction with telemedicine programs.

Matthew Ware,  B Gandek (1998)
Following the translation development stage, the second research stage of the IQOLA Project tests the assumptions underlying item scoring and scale construction. This article provides detailed information on the research methods used by the IQOLA Project to evaluate data quality, scaling and scoring assumptions, and the reliability of the SF-36 scales. Tests include evaluation of item and scale-level descriptive statistics; examination of the equality of item-scale correlations, item internal consistency and item discriminant validity; and estimation of scale score reliability using internal consistency and test-retest methods. Results from these tests are used to determine if standard algorithms for the construction and scoring of the eight SF-36 scales can be used in each country and to provide information that can be used in translation improvement.

Marie-Pierre Gagnon,  Anis Ben Yahmed,  Estibalitz Orruño … (2010)
We examined the main factors affecting the intention of physicians to use teledermatology using a modified Technology Acceptance Model (TAM). The investigation was carried out during a teledermatology pilot study conducted in Spain. A total of 276 questionnaires were sent to physicians by email and 171 responded (62%). Cronbach's alpha was acceptably high for all constructs. Theoretical variables were well correlated with each other and with the dependent variable (Intention to Use). Logistic regression indicated that the original TAM model was good at predicting physicians' intention to use teledermatology and that the variables Perceived Usefulness and Perceived Ease of Use were both significant (odds ratios of 8.4 and 7.4, respectively). When other theoretical variables were added, the model was still significant and it also became more powerful. However, the only significant predictor in the modified model was Facilitators with an odds ratio of 9.9. Thus the TAM was good at predicting physicians' intention to use teledermatology. However, the most important variable was the perception of Facilitators to using the technology (e.g. infrastructure, training and support).