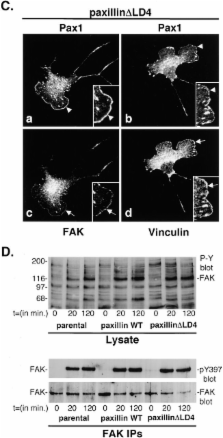 The small GTPases of the Rho family are intimately involved in integrin-mediated changes in the actin cytoskeleton that accompany cell spreading and motility. The exact means by which the Rho family members elicit these changes is unclear. Here, we demonstrate that the interaction of paxillin via its LD4 motif with the putative ARF-GAP paxillin kinase linker (PKL) ( Turner et al., 1999), is critically involved in the regulation of Rac-dependent changes in the actin cytoskeleton that accompany cell spreading and motility. Overexpression of a paxillin LD4 deletion mutant (paxillinΔLD4) in CHO.K1 fibroblasts caused the generation of multiple broad lamellipodia. These morphological changes were accompanied by an increase in cell protrusiveness and random motility, which correlated with prolonged activation of Rac. In contrast, directional motility was inhibited. These alterations in morphology and motility were dependent on a paxillin–PKL interaction. In cells overexpressing paxillinΔLD4 mutants, PKL localization to focal contacts was disrupted, whereas that of focal adhesion kinase (FAK) and vinculin was not. In addition, FAK activity during spreading was not compromised by deletion of the paxillin LD4 motif. Furthermore, overexpression of PKL mutants lacking the paxillin-binding site (PKLΔPBS2) induced phenotypic changes reminiscent of paxillinΔLD4 mutant cells. These data suggest that the paxillin association with PKL is essential for normal integrin-mediated cell spreading, and locomotion and that this interaction is necessary for the regulation of Rac activity during these events.