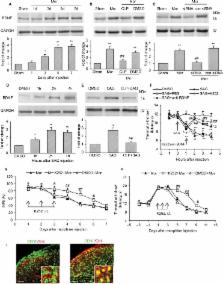 Andrea Antal,  Leila Chaieb,  Vera Moliadze … (2010)
The brain-derived neurotrophic factor (BDNF) gene is involved in mechanisms of synaptic plasticity in the adult brain. It has been demonstrated that BDNF also plays a significant role in shaping externally induced human brain plasticity. Plasticity induced in the human motor cortex by intermittent theta-burst stimulation (iTBS) was impaired in individuals expressing the Val66Met polymorphism. To explore whether this polymorphism is also important for other neuroplasticity-inducing tools in humans with modes of action differing from that of iTBS, namely, transcranial direct current (tDCS) and random noise stimulation (tRNS), we retrospectively analyzed the data of 64 subjects studied in our laboratory with regard to BDNF genotype. Fifteen subjects with the Val66Met allele, 46 subjects with the Val66Val allele, and 3 Met66Met carriers were identified. The response of the Val66Met allele carriers to stimulation differed in two protocols compared with the response of Val66Val individuals. For iTBS (15 subjects, 5 heterozygotes), plasticity could be only induced in the Val66Val allele carriers. However, for facilitatory tDCS (24 subjects, 10 heterozygotes), as well as for inhibitory tDCS, (19 subjects, 8 heterozygotes), carriers of the Val66Met allele displayed enhanced plasticity, whereas for transcranial random noise stimulation (29 subjects, 8 heterozygotes), the difference between groups was not so pronounced. BDNF polymorphism has a definite impact on plasticity in humans, which might differ according to the mechanism of plasticity induction. This impact of BDNF on plasticity should be taken into account for future studies, as well as having wider ranging implications for the treatment of neuropsychiatric disorders with transcranial stimulation tools, as it may predetermine their efficacy for the treatment of disease and rehabilitation. Copyright © 2010 Elsevier Inc. All rights reserved.

Cellular mechanisms of neuropathic pain, morphine tolerance, and their interactions.

Peter Holt,  Jun Mao,  J Mayer … (1999)
Compelling evidence has accumulated over the last several years from our laboratory, as well as others, indicating that central hyperactive states resulting from neuronal plastic changes within the spinal cord play a critical role in hyperalgesia associated with nerve injury and inflammation. In our laboratory, chronic constriction injury of the common sciatic nerve, a rat model of neuropathic pain, has been shown to result in activation of central nervous system excitatory amino acid receptors and subsequent intracellular cascades including protein kinase C translocation and activation, nitric oxide production, and nitric oxide-activated poly(ADP ribose) synthetase activation. Similar cellular mechanisms also have been implicated in the development of tolerance to the analgesic effects of morphine. A recently observed phenomenon, the development of "dark neurons," is associated with both chronic constriction injury and morphine tolerance. A site of action involved in both hyperalgesia and morphine tolerance is in the superficial laminae of the spinal cord dorsal horn. These observations suggest that hyperalgesia and morphine tolerance may be interrelated at the level of the superficial laminae of the dorsal horn by common neural substrates that interact at the level of excitatory amino acid receptor activation and subsequent intracellular events. The demonstration of interrelationships between neural mechanisms underlying hyperalgesia and morphine tolerance may lead to a better understanding of the neurobiology of these two phenomena in particular and pain in general. This knowledge may also provide a scientific basis for improved pain management with opiate analgesics.

Laurie-Anne Roeckel,  Glenn-Marie Le Coz,  Claire Gavériaux-Ruff … (2016)
Opioids produce strong analgesia but their use is limited by a paradoxical hypersensitivity named opioid-induced hyperalgesia (OIH) that may be associated to analgesic tolerance. In the last decades, a significant number of preclinical studies have investigated the factors that modulate OIH development as well as the cellular and molecular mechanisms underlying OIH. Several factors have been shown to influence OIH including the genetic background and sex differences of experimental animals as well as the opioid regimen. Mu opioid receptor (MOR) variants and interactions of MOR with different proteins were shown important. Furthermore, at the cellular level, both neurons and glia play a major role in OIH development. Several neuronal processes contribute to OIH, like activation of neuroexcitatory mechanisms, long-term potentiation (LTP) and descending pain facilitation. Increased nociception is also mediated by neuroinflammation induced by the activation of microglia and astrocytes. Neurons and glial cells exert synergistic effects, which contribute to OIH. The molecular actors identified include the Toll-like receptor 4 and the anti-opioid systems as well as some other excitatory molecules, receptors, channels, chemokines, pro-inflammatory cytokines or lipids. This review summarizes the intracellular and intercellular pathways involved in OIH and highlights some mechanisms that may be challenged to limit OIH in the future.