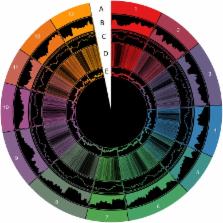 The sequencing of the full nuclear genome of sesame ( Sesamum indicum L.) provides the platform for functional analyses of genome components and their application in breeding programs. Although the importance of microsatellites markers or simple sequence repeats (SSR) in crop genotyping, genetics, and breeding applications is well established, only a little information exist concerning SSRs at the whole genome level in sesame. In addition, SSRs represent a suitable marker type for sesame molecular breeding in developing countries where it is mainly grown. In this study, we identified 138,194 genome-wide SSRs of which 76.5% were physically mapped onto the 13 pseudo-chromosomes. Among these SSRs, up to three primers pairs were supplied for 101,930 SSRs and used to in silico amplify the reference genome together with two newly sequenced sesame accessions. A total of 79,957 SSRs (78%) were polymorphic between the three genomes thereby suggesting their promising use in different genomics-assisted breeding applications. From these polymorphic SSRs, 23 were selected and validated to have high polymorphic potential in 48 sesame accessions from different growing areas of Africa. Furthermore, we have developed an online user-friendly database, SisatBase ( http://www.sesame-bioinfo.org/SisatBase/), which provides free access to SSRs data as well as an integrated platform for functional analyses. Altogether, the reference SSR and SisatBase would serve as useful resources for genetic assessment, genomic studies, and breeding advancement in sesame, especially in developing countries.

Doug Horsman,  Martin Krzywinski,  Jacqueline Schein … (2009)
We created a visualization tool called Circos to facilitate the identification and analysis of similarities and differences arising from comparisons of genomes. Our tool is effective in displaying variation in genome structure and, generally, any other kind of positional relationships between genomic intervals. Such data are routinely produced by sequence alignments, hybridization arrays, genome mapping, and genotyping studies. Circos uses a circular ideogram layout to facilitate the display of relationships between pairs of positions by the use of ribbons, which encode the position, size, and orientation of related genomic elements. Circos is capable of displaying data as scatter, line, and histogram plots, heat maps, tiles, connectors, and text. Bitmap or vector images can be created from GFF-style data inputs and hierarchical configuration files, which can be easily generated by automated tools, making Circos suitable for rapid deployment in data analysis and reporting pipelines.

This article was submitted to Crop Science and Horticulture, a section of the journal Frontiers in Plant Science