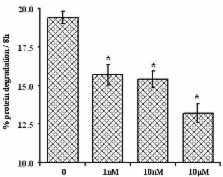 The ubiquitin-proteasome system is the predominant pathway for myofibrillar proteolysis but a previous study in C2C12 myotubes only observed alterations in lysosome-dependent proteolysis in response to complete starvation of amino acids or leucine from the media. Here, we determined the interaction between insulin and amino acids in the regulation of myotube proteolysis

Incubation of C2C12 myotubes with 0.2 × physiological amino acids concentration (0.2 × PC AA), relative to 1.0 × PC AA, significantly increased total proteolysis and the expression of 14-kDa E2 ubiquitin conjugating enzyme (p < 0.05). The proteasome inhibitor MG132 blocked the rise in proteolysis observed in the 0.2 × PC AA media. Addition of insulin to the medium inhibited proteolysis at both 0.2 and 1.0× PC AA and the expression of 14-kDa E2 proteins and C2 sub unit of 20 S proteasome (p < 0.05). Incubation of myotubes with increasing concentrations of leucine in the 0.2 × PC AA media inhibited proteolysis but only in the presence of insulin. Incubation of rapamycin (inhibitor of mTOR) inhibited amino acid or insulin-dependent p70 S6 kinase phosphorylation, blocked (P < 0.05) the inhibitory effects of 1.0 × PC AA on protein degradation, but did not alter the inhibitory effects of insulin or leucine

C Belham,  K Yonezawa,  Joseph Avruch … (1998)
The present study identifies the operation of a signal tranduction pathway in mammalian cells that provides a checkpoint control, linking amino acid sufficiency to the control of peptide chain initiation. Withdrawal of amino acids from the nutrient medium of CHO-IR cells results in a rapid deactivation of p70 S6 kinase and dephosphorylation of eIF-4E BP1, which become unresponsive to all agonists. Readdition of the amino acid mixture quickly restores the phosphorylation and responsiveness of p70 and eIF-4E BP1 to insulin. Increasing the ambient amino acids to twice that usually employed increases basal p70 activity to the maximal level otherwise attained in the presence of insulin and abrogates further stimulation by insulin. Withdrawal of most individual amino acids also inhibits p70, although with differing potency. Amino acid withdrawal from CHO-IR cells does not significantly alter insulin stimulation of tyrosine phosphorylation, phosphotyrosine-associated phosphatidylinositol 3-kinase activity, c-Akt/protein kinase B activity, or mitogen-activated protein kinase activity. The selective inhibition of p70 and eIF-4E BP1 phosphorylation by amino acid withdrawal resembles the response to rapamycin, which prevents p70 reactivation by amino acids, indicating that mTOR is required for the response to amino acids. A p70 deletion mutant, p70Delta2-46/DeltaCT104, that is resistant to inhibition by rapamycin (but sensitive to wortmannin) is also resistant to inhibition by amino acid withdrawal, indicating that amino acid sufficiency and mTOR signal to p70 through a common effector, which could be mTOR itself, or an mTOR-controlled downstream element, such as a protein phosphatase.

Jonathan Glass,  Chris Griffiths,  Ashley Amini … (2005)
Skeletal muscle size is regulated by anabolic (hypertrophic) and catabolic (atrophic) processes. We first characterized molecular markers of both hypertrophy and atrophy and identified a small subset of genes that are inversely regulated in these two settings (e.g. up-regulated by an inducer of hypertrophy, insulin-like growth factor-1 (IGF-1), and down-regulated by a mediator of atrophy, dexamethasone). The genes identified as being inversely regulated by atrophy, as opposed to hypertrophy, include the E3 ubiquitin ligase MAFbx (also known as atrogin-1). We next sought to investigate the mechanism by which IGF-1 inversely regulates these markers, and found that the phosphatidylinositol 3-kinase/Akt/mammalian target of rapamycin (PI3K/Akt/mTOR) pathway, which we had previously characterized as being critical for hypertrophy, is also required to be active in order for IGF-1-mediated transcriptional changes to occur. We had recently demonstrated that the IGF1/PI3K/Akt pathway can block dexamethasone-induced up-regulation of the atrophy-induced ubiquitin ligases MuRF1 and MAFbx by blocking nuclear translocation of a FOXO transcription factor. In the current study we demonstrate that an additional step of IGF1 transcriptional regulation occurs downstream of mTOR, which is independent of FOXO. Thus both the Akt/FOXO and the Akt/mTOR pathways are required for the transcriptional changes induced by IGF-1.

Phosphorylation of ribosomal protein S6 is inhibitory for autophagy in isolated rat hepatocytes.