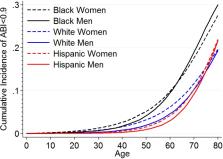 There are no available lifetime risk estimates of lower‐extremity peripheral artery disease ( PAD).

Using data from 6 US community‐based cohorts and the vital statistics, we estimated the prevalence and incidence of PAD, defined as an ankle‐brachial index < 0.90, at each year of age from birth to 80 years for white, black, and Hispanic men and women. Then, we used Markov Monte Carlo simulations in a simulated cohort of 100 000 individuals to estimate lifetime risk of PAD. On the basis of odds ratios of PAD for traditional atherosclerotic risk factors (eg, diabetes mellitus and smoking), we developed a calculator providing residual lifetime risk of PAD. In an 80‐year horizon, lifetime risks of PAD were 30.0% in black men and 27.6% in black women, but ≈19% in white men and women and ≈22% in Hispanic men and women. From another perspective, 9% of blacks were estimated to develop PAD by 60 years of age, while the same proportion was seen at ≈70 years for whites and Hispanics. The residual lifetime risk within the same race/ethnicity varied by 3.5‐ to 5‐fold according to risk factors (eg, residual lifetime risk in 45‐year‐old black men was 19.9% when current smoking, diabetes mellitus, and history of cardiovascular disease were absent versus 70.4% when all were present).

In the United States, ≈30% of blacks are estimated to develop PAD during their lifetime, whereas the corresponding estimate is ≈20% for whites and Hispanics. The residual lifetime risk within the same race/ethnicity substantially varies according to traditional risk factors.

Alan Hirsch (2001)
Peripheral arterial disease (PAD) is a manifestation of systemic atherosclerosis that is common and is associated with an increased risk of death and ischemic events, yet may be underdiagnosed in primary care practice. To assess the feasibility of detecting PAD in primary care clinics, patient and physician awareness of PAD, and intensity of risk factor treatment and use of antiplatelet therapies in primary care clinics. The PAD Awareness, Risk, and Treatment: New Resources for Survival (PARTNERS) program, a multicenter, cross-sectional study conducted at 27 sites in 25 cities and 350 primary care practices throughout the United States in June-October 1999. A total of 6979 patients aged 70 years or older or aged 50 through 69 years with history of cigarette smoking or diabetes were evaluated by history and by measurement of the ankle-brachial index (ABI). PAD was considered present if the ABI was 0.90 or less, if it was documented in the medical record, or if there was a history of limb revascularization. Cardiovascular disease (CVD) was defined as a history of atherosclerotic coronary, cerebral, or abdominal aortic aneurysmal disease. Frequency of detection of PAD; physician and patient awareness of PAD diagnosis; treatment intensity in PAD patients compared with treatment of other forms of CVD and with patients without clinical evidence of atherosclerosis. PAD was detected in 1865 patients (29%); 825 of these (44%) had PAD only, without evidence of CVD. Overall, 13% had PAD only, 16% had PAD and CVD, 24% had CVD only, and 47% had neither PAD nor CVD (the reference group). There were 457 patients (55%) with newly diagnosed PAD only and 366 (35%) with PAD and CVD who were newly diagnosed during the survey. Eighty-three percent of patients with prior PAD were aware of their diagnosis, but only 49% of physicians were aware of this diagnosis. Among patients with PAD, classic claudication was distinctly uncommon (11%). Patients with PAD had similar atherosclerosis risk factor profiles compared with those who had CVD. Smoking behavior was more frequently treated in patients with new (53%) and prior PAD (51%) only than in those with CVD only (35%; P <.001). Hypertension was treated less frequently in new (84%) and prior PAD (88%) only vs CVD only (95%; P <.001) and hyperlipidemia was treated less frequently in new (44%) and prior PAD (56%) only vs CVD only (73%, P<.001). Antiplatelet medications were prescribed less often in patients with new (33%) and prior PAD (54%) only vs CVD only (71%, P<.001). Treatment intensity for diabetes and use of hormone replacement therapy in women were similar across all groups. Prevalence of PAD in primary care practices is high, yet physician awareness of the PAD diagnosis is relatively low. A simple ABI measurement identified a large number of patients with previously unrecognized PAD. Atherosclerosis risk factors were very prevalent in PAD patients, but these patients received less intensive treatment for lipid disorders and hypertension and were prescribed antiplatelet therapy less frequently than were patients with CVD. These results demonstrate that underdiagnosis of PAD in primary care practice may be a barrier to effective secondary prevention of the high ischemic cardiovascular risk associated with PAD.