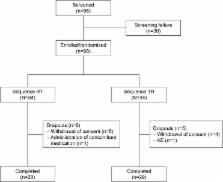 This study compared the pharmacokinetic (PK) and safety profiles of a fixed-dose combination (FDC) formulation of telmisartan and S-amlodipine with those of concomitant administration of the two drugs.

This was an open-label, randomized, crossover study in healthy male Koreans. All subjects were administered an FDC tablet containing 40 mg telmisartan and 5 mg S-amlodipine and were also coadministered the same dose of both drugs given separately. The crossover study design included a 14-day washout period between the two treatments. Blood samples were collected up to 168 h following drug administration. The plasma concentrations of telmisartan and S-amlodipine were determined by liquid chromatography tandem mass spectrometry. PK parameters and plasma concentration–time curves were compared. Safety was assessed by measuring vital signs, clinical laboratory tests, physical examinations, and patient interviews.

For both telmisartan and S-amlodipine, the C max and AUC t 90% CIs were between ln (0.8) and ln (1.25). These results suggest that the FDC formulation is pharmacokinetically bioequivalent and has a similar safety profile to the coadministration of these drugs.

Michal Pravenec,  Harrihar Pershadsingh,  Nianning Qi … (2004)
The metabolic syndrome is a common precursor of cardiovascular disease and type 2 diabetes that is characterized by the clustering of insulin resistance, dyslipidemia, and increased blood pressure. In humans, mutations in the peroxisome proliferator-activated receptor-gamma (PPARgamma) have been reported to cause the full-blown metabolic syndrome, and drugs that activate PPARgamma have proven to be effective agents for the prevention and treatment of insulin resistance and type 2 diabetes. Here we report that telmisartan, a structurally unique angiotensin II receptor antagonist used for the treatment of hypertension, can function as a partial agonist of PPARgamma; influence the expression of PPARgamma target genes involved in carbohydrate and lipid metabolism; and reduce glucose, insulin, and triglyceride levels in rats fed a high-fat, high-carbohydrate diet. None of the other commercially available angiotensin II receptor antagonists appeared to activate PPARgamma when tested at concentrations typically achieved in plasma with conventional oral dosing. In contrast to ordinary antihypertensive and antidiabetic agents, molecules that can simultaneously block the angiotensin II receptor and activate PPARgamma have the potential to treat both hemodynamic and biochemical features of the metabolic syndrome and could provide unique opportunities for the prevention and treatment of diabetes and cardiovascular disease in high-risk populations.

Hypertension among adults in the United States: National Health and Nutrition Examination Survey, 2011-2012.