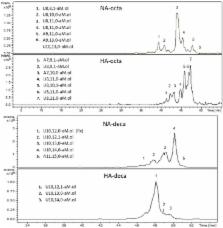 A number of low molecular weight heparin (LMWH) products are available for clinical use and although all share a similar mechanism of action, they are classified as distinct drugs because of the different depolymerisation processes of the native heparin resulting in substantial pharmacokinetic and pharmacodynamics differences. While enoxaparin has been extensively investigated, little information is available regarding the LMWH dalteparin. The present study is focused on the detailed structural characterization of Fragmin ® by LC-MS and NMR applied both to the whole drug and to its enzymatic products. For a more in-depth approach, size homogeneous octasaccharide and decasaccharide components together with their fractions endowed with high or no affinity toward antithrombin were also isolated and their structural profiles characterized. The combination of different analytical strategies here described represents a useful tool for the assessment of batch-to-batch structural variability and for comparative evaluation of structural features of biosimilar products.

The determination of hydroxyproline in urine hydrolysate

Structural features of low-molecular-weight heparins affecting their affinity to antithrombin.

Rahul Raman,  Ram Sasisekharan,  Antonella Bisio … (2009)
As part of a more extensive investigation on structural features of different low-molecular-weight heparins (LMWHs) that can affect their biological activities, Enoxaparin, Tinzaparin and Dalteparin were characterised with regards to the distribution of different chain length oligosaccharides as determined by size-exclusion (SE) chromatography, as well as their structure as defined by 2D-NMR spectra (HSQC). The three LMWHs were also fractionated into high affinity (HA) and no affinity (NA) pools with regards to their ability to bind antithrombin (AT). The HA fractions were further subfractionated and characterised. For the parent LMWHs and selected fractions, molecular weight parameters were measured using a SE chromatographic system with a triple detector (TDA) to obtain absolute molecular weights. The SE chromatograms clearly indicate that Enoxaparin is consistently richer in shorter oligosaccharides than Tinzaparin and Dalteparin. Besides providing the content of terminal groups and individual glucosamine and uronic acid residues with different sulfate substituents, the HSQC-NMR spectra permitted us to evaluate and correlate the content of the pentasaccharide, AT-binding sequence A-G-A*-I-A (AT-bs) through quantification of signals of the disaccharide sequence G-A*. Whereas the percent content of HA species is approximately the same for the three LMWHs, substantial differences were observed for the chain distribution of AT-bs as a function of length, with the AT-bs being preferentially contained in the longest chains of each LMWH. The above information will be useful in establishing structure-activity relationships currently under way. This study is therefore critical for establishing correlations between structural features of LMWHs and their AT-mediated anticoagulant activity.