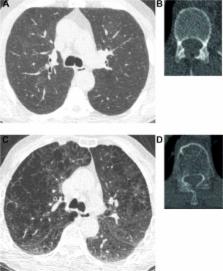 Osteoporosis is more common in patients with COPD and in smokers. The aim of this study was to assess whether measures of emphysema and airway disease on computed tomography (CT) were associated with lower bone density or vertebral fractures in smokers with and without COPD. For this purpose, we included participants from the NELSON lung cancer screening trial. Bone density was measured as Hounsfield Units in the first lumbar vertebra, and vertebral fractures were assessed semiquantitatively. The 15th percentile method (Perc15) was used to assess emphysema, and the airway lumen perimeter (Pi10) was used for airway wall thickness. Expiratory/inspiratory-ratio mean lung density (E/I-ratio MLD) was used as a measure for air trapping and tracheal index to assess tracheal deformity. Linear regression models and logistic regression models were used to assess associations between CT biomarkers, bone density, and presence of fractures. Exactly 1,093 male participants were eligible for analysis. Lower Perc15 and higher E/I-ratio MLD were significantly associated with lower bone density ( b=−1.27, P=0.02 and b=−0.37, P=0.02, respectively). Pi10 and tracheal index were not associated with bone density changes. CT-derived biomarkers were not associated with fracture prevalence. Bone density is lower with increasing extent of emphysema and small airway disease but is not associated with large airway disease and tracheal deformity. This may indicate the necessity to measure bone density early in smokers with emphysema and air trapping to prevent vertebral fractures.

Marc Decramer,  An Lehouck,  Steven Boonen … (2011)
COPD and osteoporosis are strongly associated because of common risk factors such as age, smoking, and inactivity. In addition, COPD-related systemic inflammation, vitamin D deficiency, and the use of systemic corticosteroids enhance ongoing bone destruction. Osteoporosis, in turn, may cause fragility fractures, which further impair mobility and increase morbidity and mortality. Vertebral compression fractures and rib cage fractures in patients with COPD may also reduce pulmonary function or enhance exacerbations. Early prevention and treatment of osteoporosis in COPD is, therefore, important and should be based on integrated risk assessment tools such as FRAX, which take bone mineral density, history of fragility fractures, and population-specific clinical factors into account. As long as intervention studies focusing on the bone in COPD are lacking, a more rigorous application of existing treatment guidelines of osteoporosis in general is mandatory.

Andrew Churg,  Robert Tai,  Jin Dai … (2002)
The role of tumor necrosis factor-alpha (TNF-alpha) as a mediator of cigarette smoke-induced disease is controversial. We exposed mice with knocked-out p55/p75 TNF-alpha receptors (TNF-alpha-RKO mice) to cigarette smoke and compared them with control mice. Two hours after smoke exposure, increases in gene expression of TNF-alpha, neutrophil chemoattractant, macrophage inflammatory protein-2, and macrophage chemoattractant, protein-1 were seen in control mice. By 6 hours, TNF-alpha, macrophage inflammatory protein-2, and macrophage chemoattractant protein-1 gene expression levels had returned to control values in control mice and stayed at control values through 24 hours. In TNF-alpha-RKO mice, no changes in gene expression of these mediators were seen at any time. At 24 hours, control mice demonstrated increases in lavage neutrophils, macrophages, desmosine (a measure of elastin breakdown), and hydroxyproline (a measure of collagen breakdown), whereas TNF-alpha-RKO mice did not. In separate experiments, pure strain 129 mice, which produce low levels of TNF-alpha, showed no inflammatory response to smoke at 24 hours or 7 days. We conclude that TNF-alpha is central to acute smoke-induced inflammation and resulting connective tissue breakdown, the precursor of emphysema. The findings support the idea that TNF-alpha promoter polymorphisms may be of importance in determining who develops smoke-induced chronic obstructive pulmonary disease.

Relationship between pulmonary emphysema and osteoporosis assessed by CT in patients with COPD.

Satoshi Marumo,  Shigeo Muro,  Toyohiro Hirai … (2008)
Osteoporosis is one of the important systemic features of COPD. Although COPD itself is regarded as one risk factor for osteoporosis, the relationship between the extent of emphysema and reduced bone density is still unclear. Our first aim was therefore to measure vertebral bone density and the percentage of low-attenuation area (LAA%) in the lungs using chest CT scans in COPD patients. Our second aim was to investigate the relationships among CT scan measurements, anthropometric parameters, and pulmonary function. Chest CT scans and pulmonary function tests were performed in 65 male patients with COPD. Using CT images, the CT scan density of the thoracic and lumbar vertebrae (T4, T7, T10, and L1) and the LAA% were measured quantitatively, and their correlations were analyzed. Linear regression analyses revealed that LAA% had a significant negative correlation with bone mineral density (BMD) [r = -0.522]. In addition, multiple regression analysis showed that only LAA% and body mass index (BMI) were predictive of BMD among age, BMI, smoking index, FEV(1), arterial blood gas, and LAA%. The extent of pulmonary emphysema significantly correlated with reduced bone density. Our study suggested that COPD itself could be a risk factor for osteoporosis and that chest CT scanning is useful for the management of COPD as a systemic disease.