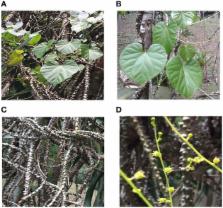 Tinospora crispa (L.) Hook. f. & Thomson (Menispermaceae), found in the rainforests or mixed deciduous forests in Asia and Africa, is used in traditional medicines to treat numerous health conditions. This review summarizes the up-to-date reports about the ethnobotany, phytochemistry, pharmacological activities, toxicology, and clinical trials of the plant. It also provides critical assessment about the present knowledge of the plant which could contribute toward improving its prospect as a source of lead molecules for drug discovery. The plant has been used traditionally in the treatment of jaundice, rheumatism, urinary disorders, fever, malaria, diabetes, internal inflammation, fracture, scabies, hypertension, reducing thirst, increasing appetite, cooling down the body temperature, and maintaining good health. Phytochemical analyses of T. crispa revealed the presence of alkaloids, flavonoids, and flavone glycosides, triterpenes, diterpenes and diterpene glycosides, cis clerodane-type furanoditerpenoids, lactones, sterols, lignans, and nucleosides. Studies showed that the crude extracts and isolated compounds of T. crispa possessed a broad range of pharmacological activities such as anti-inflammatory, antioxidant, immunomodulatory, cytotoxic, antimalarial, cardioprotective, and anti-diabetic activities. Most pharmacological studies were based on crude extracts of the plant and the bioactive compounds responsible for the bioactivities have not been well identified. Further investigations are required to transform the experience-based claims on the use of T. crispa in traditional medicine practices into evidence-based information. The plant extract used in pharmacological and biological studies should be qualitatively and quantitatively analyzed based on its biomarkers. There should be detail in vitro and in vivo studies on the mechanisms of action of the pure bioactive compounds and more elaborate toxicity study to ensure safety of the plant for human use. More clinical trials are encouraged to be carried out if there are sufficient preclinical and safety data.

Molecular physiology of the regulation of hepatic gluconeogenesis and glycolysis.

D Granner,  S Pilkis (1991)
Understanding the regulation of hepatic glucose metabolism had its foundation in the elucidation of several pathways, but recent advances have come from the application of molecular genetics. Five years ago little was known about the primary structure of the key regulatory enzymes. Since then, the primary sequence of liver GK, 6-PF-1-K, Fru-1,6-P2ase, PK, PEPCK, and 6-PF-2-K/Fru-2,6-P2ase have been derived from cDNA sequences and/or determined by direct protein sequencing. This has provided new insights into the molecular mechanisms of catalysis and the regulation of these enzymes by covalent modification. Isolation of the cDNAs for these enzymes also has allowed for the quantitation of specific mRNAs and permitted analysis of hormonal control of specific gene expression. The genes for these enzymes have been isolated and sequenced, and their promoter regions are being identified and characterized. Hormone response elements have been delineated in several of the promoters. The promoter regions for 6-PF-2-K/Fru-2,6-P2ase and Fru-1,6-P2ase have also been identified, and future research will focus on the elucidation of the mechanisms whereby hormones regulate the expression of these genes. A number of generalizations can be made about the regulation of gene expression of glycolytic/gluconeogenic enzymes. First, there is coordinate hormonal regulation of gene expression and these effects are consonant with their physiologic actions. Insulin induces the mRNAs that encode glycolytic enzymes and represses the mRNAs that encode gluconeogenic enzymes; cAMP has opposite effects. Both can increase or decrease transcription. Whereas insulin and cAMP affect all of these mRNAs, glucocorticoids appear to have a more restricted action. Second, transcriptional and posttranscriptional regulatory mechanisms are involved. The synthesis of all of the mRNAs discussed is regulated by hormones. Relatively little is known about how mRNA stability is regulated in general, but it is clear that PEPCK mRNA is stabilized by agents that increase the rate of transcription of the gene. Under appropriate metabolic signals this dual control of mRNA synthesis and stability provides for a long-term increase in PEPCK mRNA and protein. Studies with PK mRNA are less direct, but suggest a similar dual mechanism. It will be interesting to see whether multilevel regulation is restricted to these two mRNAs, both of which are involved in the same substrate cycle, or whether the stability of other mRNAs involved in hepatic glucose metabolism is also affected. Third, glucose appears to be important in the regulation of these hepatic genes.(ABSTRACT TRUNCATED AT 400 WORDS)

Medicinal plant knowledge and its erosion among the Mien (Yao) in northern Thailand.

Kamonnate Srithi,  Prachaya Srisanga,  Henrik Balslev … (2009)
We studied local knowledge and actual uses of medicinal plants among the Mien in northern Thailand, documenting traditional medical practices and its transfer between generations. With the assumption that discrepancies between knowledge and actual use represent knowledge erosion, we studied whether actual use of medicinal plants corresponded to people's knowledge of such uses. We used local knowledge from four specialist informants as the domain for semi-structured interviews with 34 randomly selected non-specialist informants. We calculated informant consensus, use value, and fidelity level for each species and use category and performed statistical analyses with Kolmogorov-Smirnov tests, Pearson correlation coefficient, Spearman's rank correlation coefficient, and paired-sample t-tests. We found significant discrepancies between knowledge and actual use of medicinal plants. The number of known and actually used plants increased with increasing informant age and decreased with increasing years of formal education. Medicinal plant knowledge and use in these Mien communities is undergoing inter-generational erosion because of acculturation and interrupted knowledge transmission. Preservation of Mien medicinal plant intellectual heritage requires continued documentation concerning use, conservation, and sustainable management of this resource, which should be publicized to younger Mien.

Arménio Barbosa,  Pedro Almeida,  Iris D. Navarro (2001)
The present communication constitutes a global review on plant analgesic activity with special emphasis on those found in different parts of the world, including Brazil, which act on the central nervous system. One hundred and sixty six plants belonging to 79 families are reported.