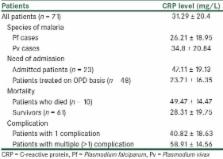 C-reactive protein (CRP) is useful as marker of severity in malaria. African studies have shown that serum CRP levels correlate with parasite burden and complications in malaria, especially falciparum. However, there are very few data on CRP levels in Indian malaria patients.

We assessed CRP levels in malaria patients at presentation and studied for any relation of CRP levels with subsequent prognosis. Statistical tests included student's t-test, Mann Whitney U test, and chi square test, all with 2-tailed analyzes.

Our study in Indian population corroborates the findings in African studies regarding prognostic role of CRP in malaria. CRP is an effective biomarker in assessing malaria severity and also for follow-up.

The burden of malaria mortality among African children in the year 2000.

Eline Korenromp,  Claudia Stein,  Robert W. Snow … (2006)
Although malaria is a leading cause of child deaths, few well-documented estimates of its direct and indirect burden exist. Our objective was to estimate the number of deaths directly attributable to malaria among children <5 years old in sub-Saharan Africa for the year 2000. We divided the population into six sub-populations and, using results of studies identified in a literature review, estimated a malaria mortality rate for each sub-population. Malaria deaths were estimated by multiplying each sub-population by its corresponding rate. Sensitivity analyses were performed to assess the impact of varying key assumptions. The literature review identified 31 studies from 14 countries in middle Africa and 17 studies and reports from four countries in southern Africa. In 2000, we estimated that approximately 100 million children lived in areas where malaria transmission occurs and that 803 620 (precision estimate: 705 821-901 418) children died from the direct effects of malaria. For all of sub-Saharan Africa, including populations not exposed to malaria, malaria accounted for 18.0% (precision estimate: 15.8-20.2%) of child deaths. These estimates were sensitive to extreme assumptions about the causes of deaths with no known cause. These estimates, based on the best available data and methods, clearly demonstrate malaria's enormous mortality burden. We emphasize that these estimates are an approximation with many limitations and that the estimates do not account for malaria's large indirect burden. We describe information needs that, if filled, might improve the validity of future estimates.

Bruno B. Andrade,  Antonio Reis-Filho,  Sebastião Souza-Neto … (2010)
Background Despite clinical descriptions of severe vivax malaria cases having been reported, data regarding immunological and inflammatory patterns are scarce. In this report, the inflammatory and immunological status of both mild and severe vivax malaria cases are compared in order to explore immunopathological events in this disease. Methods and Results Active and passive malaria case detections were performed during 2007 in Buritis, Rondônia, in the Brazilian Amazon. A total of 219 participants enrolled the study. Study individuals were classified according to the presence of Plasmodium vivax infection within four groups: non-infected (n = 90), asymptomatic (n = 60), mild (n = 50) and severe vivax infection (n = 19). A diagnosis of malaria was made by microscopy and molecular assays. Since at present no clear criteria define severe vivax malaria, this study adapted the consensual criteria from falciparum malaria. Patients with severe P. vivax infection were younger, had lived for shorter time in the endemic area, and recalled having experienced less previous malaria episodes than individuals with no malaria infection and with mild or asymptomatic infection. Strong linear trends were identified regarding increasing plasma levels of C reactive protein (CRP), serum creatinine, bilirubins and the graduation of disease severity. Plasma levels of tumour necrosis factor (TNF), interferon-gamma(IFN-gamma) and also IFN-gamma/interleukin-10 ratios were increased and exhibited a linear trend with gradual augmentation of disease severity. Both laboratory parameters of organ dysfunction and inflammatory cytokines were reduced during anti-parasite therapy in those patients with severe disease. Conclusion Different clinical presentations of vivax malaria infection present strong association with activation of pro-inflammatory responses and cytokine imbalance. These findings are of utmost importance to improve current knowledge about physiopathological concepts of this serious widespread disease.

P. Robinson,  A Jenney,  M Tachado … (2015)
Imported malaria is increasing in nonendemic countries, including Australia. The objective of this study was to describe the epidemiology and clinical features of travelers with imported malaria presenting to a specialist infectious diseases hospital. A retrospective case series of 246 consecutively admitted inpatients with laboratory confirmed malaria. The main outcome measures were the proportion of patients infected with each malaria species, and relationship between species and country of birth, area of acquisition, adequacy of chemoprophylaxis, clinical features, laboratory investigations, and treatment. Plasmodium vivax caused 182 (68.9%) episodes, Plasmodium falciparum caused 71 (26.9%), Plasmodium ovale caused 5 (1.9%), and Plasmodium malariae 1 (0.4%). Fifty-six percent of patients reported chemoprophylaxis use. People born in a country with endemic malaria (36.6%) were less likely to have used chemoprophylaxis. Malaria was most commonly acquired in Papua New Guinea and Southeast Asia. The median times to diagnosis after return to Australia for P. falciparum and P. vivax infections were 1 and 9 weeks respectively. The longest interval between last arrival in Australia and presentation with P. falciparum malaria was 32 weeks. Fever (96%), headache (74%), and a tender or palpable spleen (40%), were the most common clinical features. Diarrhea was more common in P. falciparum, and rigors in P. vivax infections. Thrombocytopenia (71%), abnormal liver function tests and an elevated C-reactive protein (85%) were common. Six patients had severe falciparum malaria but no deaths occurred during the study period. Malaria remains a health threat for those traveling in endemic areas and is associated with failure to use chemoprophylaxis appropriately. Nonspecific clinical features may lead to delayed diagnosis and misdiagnosis. Malaria should be suspected in the febrile traveler, regardless of birthplace, prophylaxis, symptomatology, or the time that has elapsed since leaving the malarious area.