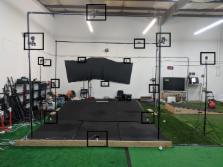 Improvements in data processing, increased understanding of the biomechanical background behind kinetics and kinematics, and technological advancements in inertial measurement unit (IMU) sensors have enabled high precision in the measurement of joint angles and acceleration on human subjects. This has resulted in new devices that reportedly measure joint angles, arm speed, and stresses to the pitching arms of baseball players. This study seeks to validate one such sensor, the MotusBASEBALL unit, with a marker-based motion capture laboratory.

We hypothesize that the joint angle measurements (“arm slot” and “shoulder rotation”) of the MotusBASEBALL device will hold a statistically significant level of reliability and accuracy, but that the “arm speed” and “stress” metrics will not be accurate due to limitations in IMU technology.

This study attempts to validate the use of the MotusBASEBALL for future studies that look at the arm slot, shoulder rotation, arm speed, and stress measurements from the MotusBASEBALL sensor. Excepting elbow extension velocity, all metrics from the MotusBASEBALL unit showed significant correlations to their corresponding metrics from motion capture and while some magnitudes differ substantially and therefore fall short in validity, the link between the metrics is strong enough to indicate reliable casual use. Further research should be done to further investigate the validity and reliability of the arm speed metric.

Ronald de Vries (1996)
Zatsiorsky et al. (in Contemporary Problems in Biomechanics, pp. 272-291, CRC Press, Massachusetts, 1990a) obtained, by means of a gamma-ray scanning technique, the relative body segment masses, center of mass (CM) positions, and radii of gyration for samples of college-aged Caucasian males and females. Although these data are the only available and comprehensive set of inertial parameters regarding young adult Caucasians, they have been rarely utilized for biomechanical analyses of subjects belonging to the same or a similar population. The main reason is probably that Zatsiorsky et al. used bony landmarks as reference points for locating segment CMs and defining segment lengths. Some of these landmarks were markedly distant from the joint centers currently used by most researchers as reference points. The purpose of this study was to adjust the mean relative CM positions and radii of gyration reported by Zatsiorsky et al., in order to reference them to the joint centers or other commonly used landmarks, rather than the original landmarks. The adjustments were based on a number of carefully selected sources of anthropometric data.

ISB recommendation on definitions of joint coordinate system of various joints for the reporting of human joint motion—part I: ankle, hip, and spine

Kinetic comparison among the fastball, curveball, change-up, and slider in collegiate baseball pitchers.

Jason R Andrews,  Darra Kingsley,  Jeremy Loftice … (2006)
Controversy exists about whether breaking pitches are more stressful than are fastballs. Previous biomechanical studies compared kinematics but not kinetics. Elbow and shoulder forces and torques are statistically different among the fastball, curveball, change-up, and slider. Descriptive laboratory study. Twenty-one healthy collegiate pitchers were studied with a high-speed automated digitizing system. All subjects threw fastballs (n = 21), most threw curveballs (n = 20) and change-ups (n = 19), and a few threw sliders (n = 6). Wrist, elbow, and shoulder kinetics were calculated using inverse dynamics. Nine kinetic and 26 kinematic parameters were compared among the different pitch types using repeated-measures analysis of variance. At the shoulder, internal rotation torque, horizontal adduction torque, abduction torque, and proximal force were significantly less in the change-up than in the other 3 pitches. Shoulder horizontal adduction torque was greater in the fastball than in the curveball and slider. Shoulder proximal force was greater in the slider than in the curveball. Elbow proximal force was less in the change-up than in the other 3 pitches. Elbow varus torque was greater in the fastball and curveball than in the change-up. Elbow flexion torque was greater in the curveball than in the change-up. The curveball and change-up demonstrated kinematic differences from the fastball, consistent with previous studies. There were significant kinematic differences between the fastball and curveball but few kinetic differences. The change-up had lower joint kinetics, lower angular velocities, and different body positions than the other 3 pitch types had. Results for the slider were inconclusive because of small sample size. Because the resultant joint loads were similar between the fastball and curveball, this study did not indicate that either pitch was more stressful or potentially dangerous for a collegiate pitcher. The low kinetics in the change-up implies that it is the safest.