The Effect of Ultraviolet B Irradiation Compared with Oral Vitamin D Supplementation on the Well-being of Nursing Home Residents with Dementia: A Randomized Controlled Trial 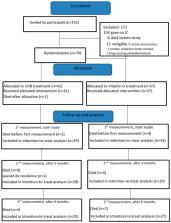 There are indications that ultraviolet B (UVB) exposure has beneficial effects on well-being through mechanisms other than vitamin D synthesis alone. We conducted a randomized controlled multicenter trial to compare the effects of UVB light and vitamin D supplementation (VD) in terms of the well-being of nursing home residents with dementia. Participants were randomly assigned to the intervention group (UVB group, n = 41; half-body UVB irradiation, twice weekly over 6 months, with 1 standard erythema dose (SED)) or to the control group (VD group, n = 37; 5600 International units (IU) cholecalciferol supplementation once a week). The main outcome was well-being, measured by the Cohen-Mansfield Agitation Inventory (CMAI) and the Cornell scale for depression in dementia at 0, 3, and 6 months. Secondary outcomes were QUALIDEM quality of life domains and biochemical parameters of bone homeostasis. Intention-to-treat analysis with linear mixed modeling showed no significant between-group differences on agitation ( p = 0.431) or depressive symptoms ( p = 0.982). At six months, the UVB group showed less restless/tense behavior compared to the VD group (mean difference of the mean change scores 2.2, 95% CI 0.8 to 3.6; p = 0.003 for group x time interaction) and lower serum 25(OH)D3 concentration (estimated mean difference - 21.9, 95% CI −32.6 to −11.2; p = 0.003 for group difference). The exposure of nursing home residents with dementia to UVB light showed no positive benefits in terms of wellbeing. UVB treatment may have a positive effect on the restless/tense behavior characteristic of advanced dementia but more research is needed to confirm this finding.

A higher dose of vitamin d reduces the risk of falls in nursing home residents: a randomized, multiple-dose study.

Kerry Broe,  Sharon Chen,  Heike Bischoff-Ferrari … (2007)
To determine the effect of four vitamin D supplement doses on falls risk in elderly nursing home residents. Secondary data analysis of a previously conducted randomized clinical trial. Seven hundred twenty-five-bed long-term care facility. One hundred twenty-four nursing home residents (average age 89). Participants were randomly assigned to receive one of four vitamin D supplement doses (200 IU, 400 IU, 600 IU, or 800 IU) or placebo daily for 5 months. Number of fallers and number of falls assessed using facility incident tracking database. Over the 5-month study period, the proportion of participants with falls was 44% in the placebo group (11/25), 58% (15/26) in the 200 IU group, 60% (15/25) in the 400 IU group, 60% (15/25) in the 600 IU group, and 20% (5/23) in the 800 IU group. Participants in the 800 IU group had a 72% lower adjusted-incidence rate ratio of falls than those taking placebo over the 5 months (rate ratio=0.28; 95% confidence interval=0.11-0.75). No significant differences were observed for the adjusted fall rates compared to placebo in any of the other supplement groups. Nursing home residents in the highest vitamin D group (800 IU) had a lower number of fallers and a lower incidence rate of falls over 5 months than those taking lower doses. Adequate vitamin D supplementation in elderly nursing home residents could reduce the number of falls experienced by this high falls risk group.

The cutaneous serotoninergic/melatoninergic system: securing a place under the sun.

Andrzej T. Slominski,  Martin D. Tobin,  J Wortsman (2005)
It was recently discovered that mammalian skin can produce serotonin and transform it into melatonin. Pathways for the biosynthesis and biodegradation of serotonin and melatonin have been characterized in human and rodent skin and in their major cellular populations. Moreover, receptors for serotonin and melatonin receptors are expressed in keratinocytes, melanocytes, and fibroblasts and these mediate phenotypic actions on cellular proliferation and differentiation. Melatonin exerts receptor-independent effects, including activation of pathways protective of oxidative stress and the modification of cellular metabolism. While serotonin is known to have several roles in skin-e.g., pro-edema, vasodilatory, proinflammatory, and pruritogenic-melatonin has been experimentally implicated in hair growth cycling, pigmentation physiology, and melanoma control. Thus, the widespread expression of a cutaneous seorotoninergic/melatoninergic syste,m(s) indicates considerable selectivity of action to facilitate intra-, auto-, or paracrine mechanisms that define and influence skin function in a highly compartmentalized manner. Notably, the cutaneous melatoninergic system is organized to respond to continuous stimulation in contrast to the pineal gland, which (being insulated from the external environment) responds to discontinuous activation by the circadian clock. Overall, the cutaneous serotoninergic/melatoninergic system could counteract or buffer external (environmental) or internal stresses to preserve the biological integrity of the organ and to maintain its homeostasis.-Slominski, A. J., Wortsman, J., Tobin, D. J. The cutaneous serotoninergic/melatoninergic system: securing a place under the sun.