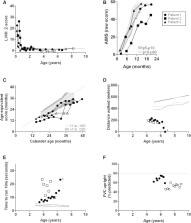 Before immunomodulation anti-rhGAA antibody titers ranged from 1:156,250 to 1:781,250 and at last assessment from 1:31,250 to 1:156,250. Neutralizing effects of anti-rhGAA antibody titers (observed in two patients) disappeared. Infusion-associated reactions were no longer present. Immunomodulation resulted in substantial increases of aspartate transaminase, alanine transaminase, and creatine kinase levels. The two CRIM-negative patients who could walk at start of immunomodulation maintained their ability to walk; the patient who had lost this ability did not regain it.

Hans van Eijk,  Nynke Weisglas-Kuperus,  Arnold Reuser … (2004)
Recent reports warn that the worldwide cell culture capacity is insufficient to fulfill the increasing demand for human protein drugs. Production in milk of transgenic animals is an attractive alternative. Kilogram quantities of product per year can be obtained at relatively low costs, even in small animals such as rabbits. We tested the long-term safety and efficacy of recombinant human -glucosidase (rhAGLU) from rabbit milk for the treatment of the lysosomal storage disorder Pompe disease. The disease occurs with an estimated frequency of 1 in 40,000 and is designated as orphan disease. The classic infantile form leads to death at a median age of 6 to 8 months and is diagnosed by absence of alpha-glucosidase activity and presence of fully deleterious mutations in the alpha-glucosidase gene. Cardiac hypertrophy is characteristically present. Loss of muscle strength prevents infants from achieving developmental milestones such as sitting, standing, and walking. Milder forms of the disease are associated with less severe mutations and partial deficiency of alpha-glucosidase. In the beginning of 1999, 4 critically ill patients with infantile Pompe disease (2.5-8 months of age) were enrolled in a single-center open-label study and treated intravenously with rhAGLU in a dose of 15 to 40 mg/kg/week. Genotypes of patients were consistent with the most severe form of Pompe disease. Additional molecular analysis failed to detect processed forms of alpha-glucosidase (95, 76, and 70 kDa) in 3 of the 4 patients and revealed only a trace amount of the 95-kDa biosynthetic intermediate form in the fourth (patient 1). With the more sensitive detection method, 35S-methionine incorporation, we could detect low-level synthesis of -glucosidase in 3 of the 4 patients (patients 1, 2, and 4) with some posttranslation modification from 110 kDa to 95 kDa in 1 of them (patient 1). One patient (patient 3) remained totally deficient with both detection methods (negative for cross-reactive immunologic material [CRIM negative]). The alpha-glucosidase activity in skeletal muscle and fibroblasts of all 4 patients was below the lower limit of detection ( 3 years of treatment. Anti-rhAGLU immunoglobulin G titers initially increased during the first 20 to 48 weeks of therapy but declined thereafter. There was no consistent difference in antibody formation comparing CRIM-negative with CRIM-positive patients. Muscle alpha-glucosidase activity increased from 42 degrees C, unstable blood pressure, and coma. The respiratory course of patient 1 remained uneventful. The 2 older patients, who both were hypercapnic (partial pressure of carbon dioxide: 10.6 and 9.8 kPa; normal range: 4.5-6.8 kPa) at start of treatment, became ventilator dependent before the first infusion (patient 2) and after 10 weeks of therapy (patient 4). Patient 4 was gradually weaned from the ventilator after 1 year of high-dose treatment and was eventually completely ventilator-free for 5 days, but this situation could not be maintained. Currently, both patients are completely ventilator dependent. The most remarkable progress in motor function was seen in the younger patients (patients 1 and 3). They achieved motor milestones that are unmet in infantile Pompe disease. Patient 1 learned to crawl (12 months), walk (16 months), squat (18 months), and climb stairs (22 months), and patient 3 learned to sit unsupported. The Alberta Infant Motor Scale score for patients 2, 3, and 4 remained far below p5. Patient 1 followed the p5 of normal. Our study shows that a safe and effective medicine can be produced in the milk of mammals and encourages additional development of enzyme replacement therapy for the several forms of Pompe disease. Restoration of skeletal muscle function and prevention of pulmonary insufficiency require dosing in the range of 20 to 40 mg/kg/week. The effect depends on residual muscle function at the start of treatment. Early start of treatment is required.

Silvia Ulrich,  Florian Hildenbrand,  Ursula Treder … (2013)
Background The six-minute walk test (6MWT) is a simple, low tech, safe and well established, self-paced assessment tool to quantify functional exercise capacity in adults. The definition of normal 6MWT in children is especially demanding since not only parameters like height, weight and ethnical background influence the measurement, but may be as crucial as age and the developmental stage. The aim of this study is establishing reference values for the 6MWT in healthy children and adolescents in Switzerland and to investigate the influence of age, anthropometrics, heart rate, blood pressure and physical activity on the distance walked. Methods Children and adolescents between 5–17 years performed a 6MWT. Short questionnaire assessments about their health state and physical activities. anthropometrics and vitals were measured before and after a 6-minute walk test and were previously defined as secondary outcomes. Results Age, height, weight and the heart rate after the 6MWT all predicted the distance walked according to different regression models: age was the best single predictor and mostly influenced walk distance in younger age, anthropometrics were more important in adolescents and females. Heart rate after the 6MWT was an important distance predictor in addition to age and outreached anthropometrics in the majority of subgroups assessed. Conclusions The 6MWT in children and adolescents is feasible and practical. The 6MWT distance depends mainly on age; however, heart rate after the 6MWT, height and weight significantly add information and should be taken into account mainly in adolescents. Reference equations allow predicting 6-minute walk test distance and may help to better assess and compare outcomes in young patients with cardiovascular and respiratory diseases and are highly warranted for different populations.